With over 8 billion smartphone views a day, US consumers are obsessed with their devices, increasingly using their mobile phone to manage finances, make payments, track health and lifestyle factors, and even control home environments.

Every year, the smartphone becomes more ubiquitous and pervasive. According to the Deloitte 2015 Global Mobile Consumer Survey, today’s mobile consumer is comfortable with making their mobile device the remote control for daily life, and is increasingly doing so while engaged in other activities such as shopping, watching TV and even while talking to friends or at a restaurant. This provides extensive opportunity for growth and innovation in banking and other industries.

“Mobile technology is now moving beyond simply being a mode of communication and advancing towards the era of the always-connected consumer,” said Craig Wigginton, vice chairman and U.S telecommunications sector leader, Deloitte & Touche LLP. “As the lines that define mobile usage continue to blur, industries are now poised with seemingly endless opportunities to calibrate and develop solutions and products aimed at monitoring, recording, and communicating factors critical to our surroundings and well-being, all through the simplicity of a swipe or touch of a screen.”

Rising ownership of smartphones has not caused the abandonment of other devices. Deloitte found that 7 in 10 respondents own a smartphone, 51% own tablets, and 14% own some form of wearable. Nine percent were found to own all three types of mobile devices. This accumulation of devices should not surprise since each is optimized for a different task. 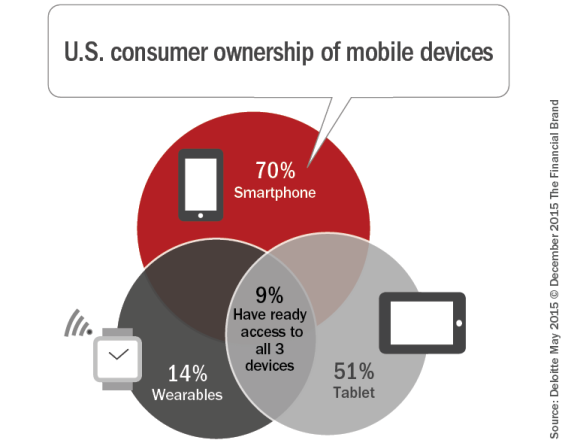 Over the past several years, the smartphone has become the overarching digital tool that the PC was ten years ago. And while wearables may supplant the mobile phone as the ‘go to’ device of choice in the future, there is still a great deal of innovation potential for the smartphone as data speeds and mobile capabilities continue to increase.

The obsession with mobile connectivity is increasing across every demographic segment. As expected, the youngest generation surveyed (18-24) had the heaviest mobile use (measured in terms of ‘looks per day’). Interestingly, they surpassed the 25-34 age group by almost 50%, despite the fact that all generations increased the number of ‘looks’ by 13 compared to last year. Other interesting statistics from the study include:

In addition to checking phones more frequently during the day, 17% of smartphone owners check their phones immediately upon waking up in the morning (up from 14% a year ago), while 43% of consumers check their phones within five minutes (up from 39% a year ago). Upon waking, we reach for our devices to see who has communicated with us, looking for texts, emails and social network updates.

The ritual is repeated a bit less obsessively at bedtime, with 13% of smartphone users looking at their phone immediately before preparing to sleep and 33% checking their phones within five minutes before going to sleep. 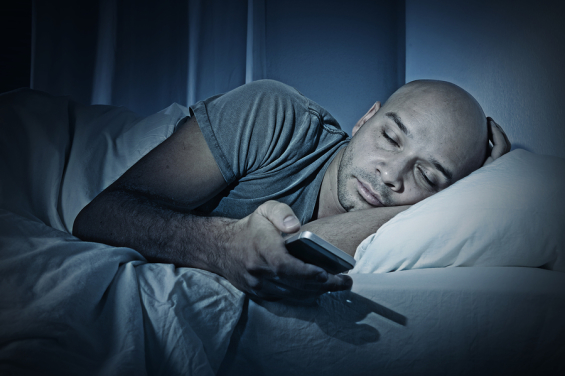 Another interesting trend is the polarisation in the usage of voice on mobile, with some users increasing their voice call volumes while other users are not using voice at all. Instead, data communication, such as instant messaging, social networking and use of email have become more widespread. Apps have also replaced calls we used to make for purchases, requesting a taxi, booking a reservation or doing banking. And the data exclusive consumer is increasing.

According to Deloitte, “The rise in device obsession may be due in part to the continued increase in device ownership – with smartphone ownership jumping 12% over last year, and tablet ownership increasing by 13%. Interest in purchasing a device has also rebounded after intent to purchase figures fell across the board last year.”

For millions of consumers, the smartphone is the most personal and most coveted of companions, rarely being more than an arm’s length away. It has become a vital part of many of our daily rituals – the centerpiece of more than conversations and pervasive in everything we do. According to Deloitte, US consumers look at their smartphones over 8 billion times a day, often while multi-tasking.

Using a phone “while out shopping” was the #1 reason of any leisure activity questioned, with over 90% using a phone while visiting retailers.  Eighty-seven percent said they used their phone while meeting a friend and when watching TV, and over 80% while at a restaurant. As evidence that the mobile generations may be aging, the highest level of use of the phone while watching TV was in the 25-34 age category. 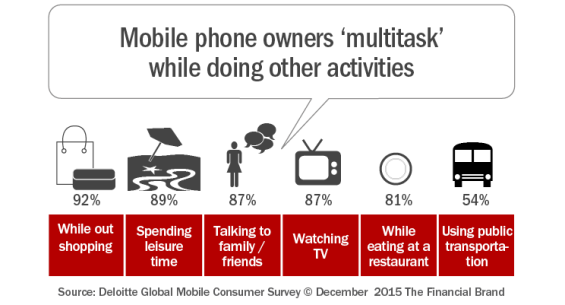 While the traditional wallet is far from doomed, mobile payments are beginning to become more prevalent. As the base of retailers accepting mobile payments via apps or in-store readers continues to increase, early adopters may soon be able to leave home without their wallets. For the mainstream consumer, it will be many years before credit cards replaced entirely, but the trends point to a time when the mobile device will be the primary payment method.

The use of mobile devices to make in-store payments increased by close to four-fold compared to last year, moving from 5% in 2014 to 18% in this study. It is expected that the proportion of phone owners who pay using their mobile device in-store will increase further in the coming years, with the proportion of those who do so regularly rising as well, led by the younger demographic segments. For instance: 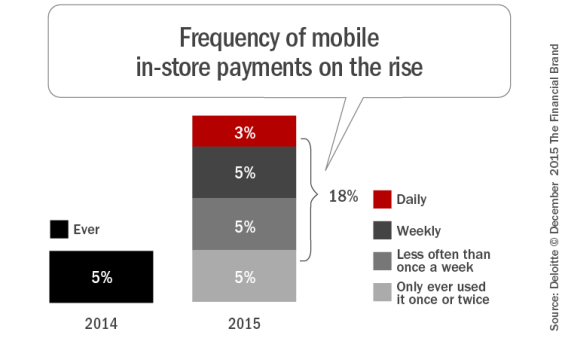 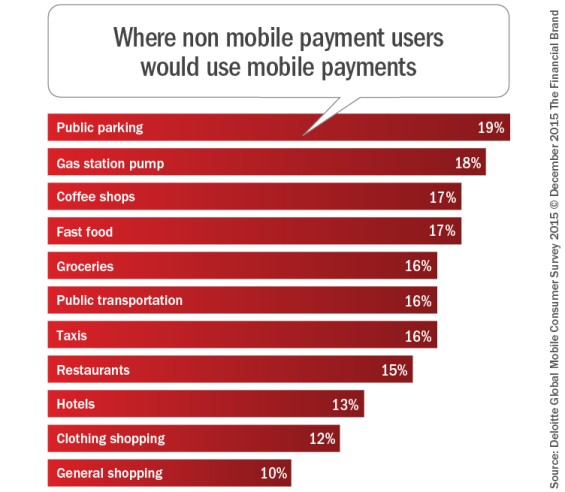 “We believe that education of consumers on the benefits of advanced security features of some forms of mPayments technologies could yield additional growth opportunities for the sector,” said Wigginton from Deloitte.

The Internet of Things Connected Consumer

The Internet of Things (IoT) describes a vision where every object – from refrigerators to thermostats and security systems to traffic lights – are connected, enabling value creation when combined with our increasing mobile connectivity. The penetration of smartphones means that we already own the remote control for all these connected things.

For the first time, car-based IoT generated considerable interest in the Deloitte survey, with 68% of respondents expressing interest in this area. It eclipsed home-based IoT technologies by 15% and wearables by 9%. Home control and monitoring are valued most by consumers in smart-home tech, especially by younger generation with 45% interested in home control, and 41% in home monitoring.

For health wellness applications, smartwatches drive more engagement than fitness bands despite lower penetration of watches. Forty percent of the smartwatch owners use them to monitor fitness, while 37% used fitness bands for fitness level monitoring.

With regard to the Internet of Things, out of the top six concerns on why consumers would not be interested in smart home technology, the top three are all security-related while the next three are all privacy related. This indicates that consumers may be willing to give up some level of privacy, particularly younger generations who are growing up in an age of everything being online, in return for greater security.

Forty eight percent of consumers said their greatest potential concern was a security-related hacking into a home system to cause damage or theft vs. the highest ranking privacy concern – protecting personal information – cited by only 33% of respondents. Interestingly, the youngest and oldest demographic segments – 18 to 24 year olds and those 65 or older – shared the same greatest concern for security-related issues at 53% vs. privacy-related issues at 35% for 18 to 24 year olds and 33% for those age 65 or older. 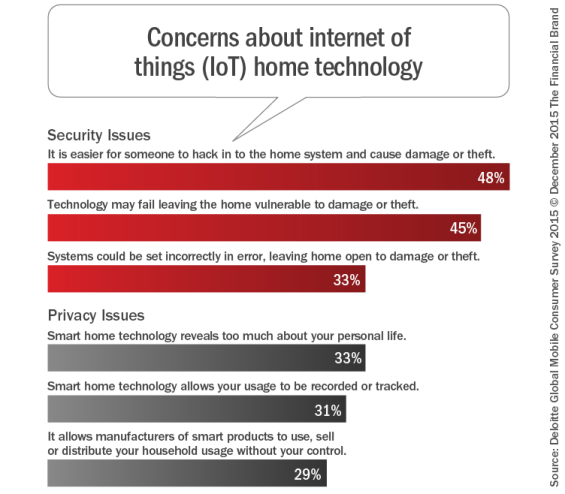 Near-term demand for IoT devices appears minimal relative to established product categories. The proportion of US adults considering purchasing an IoT device is considerably lower than the levels of purchase intent for smartphones, tablets and smart watches. Connected home and individual devices require a dramatic change in behavior. To appeal to the mass-market consumer, each will need to provide value-added benefits or serve a specific need not addressed by an existing device.

Deloitte annually prepares a comprehensive and robust survey of mobile usage around the globe. In its fifth edition, the Global Mobile Consumer Survey (GMCS) provides a unique insight into the mobile consumer behavior of 49,000 respondents across 30 countries.

The survey scope ranges from quantifying ownership of devices and understanding how these are being used and connected. Some of the topics covered include: smartphone usage intensity, communication services (voice, VoIP, video calling, SMS, Instant messaging), mobile payments, after-life of smartphones, 4G, multi-play, content creation and consumption on smartphones.