The mobile channel continues to gain ground with banking consumers, but physical branches remain central to the retail delivery strategy for most institutions.
Subscribe Now!

While the mobile channel continues to capture the attention of the banking industry, in-person interactions present some of the strongest opportunities for retail banks and credit unions to increase satisfaction levels and drive referrals, according to a new study by Market Force Information.

More than 3,800 consumers were polled for the study, which explored trends in banking technology, retail channel delivery, consumer attitudes and preferences.

Market Force Information found that 72% of consumers whose bank offers a mobile app have downloaded it, an increase of 7% compared to 2014. Those in the 18-24 year-old range are the most likely to have given their institution’s mobile app a try, at 93%, but there are increases across all age groups. In fact, nearly half of those over age 65 say they have at least downloaded the app offered by their bank or credit union. 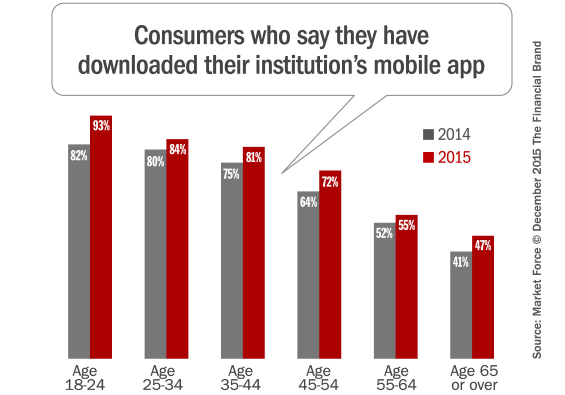 The most prevalent app activities are checking balances, checking payment history and transferring funds. Very few are using the app to apply for new bank accounts or withdraw emergency cash.

Growth in digital wallets has also been sluggish. While mobile app use is on a fast track, digital wallets aren’t enjoying the same success. More than half of consumers surveyed don’t know what a digital wallet is, and only 12% are currently using them. PayPal Mobile is the most widely used, although Apple Passbook has gained the greatest momentum in the past year. The most common uses for mobile wallets are making payments, storing loyalty cards and making “tap-and-pay” purchases.

But even as new technologies take hold, the vast majority of consumers still prefer traditional banking providers and continue to visit branch locations. 63% of those surveyed use a traditional retail bank as their primary institution, while 29% use a credit union or community. Only 3% primarily use an e-bank.

Contrary to expectations, consumers still visit branches fairly frequently. In the past 90 days, 21% of consumers went into a branch to speak with someone about banking products and services, while 72% conducted a transaction with a cashier. Of those consumers who recently met with a branch representative, 16% reported a poor experience, while the remaining 84% were either “satisfied” or “very satisfied.” 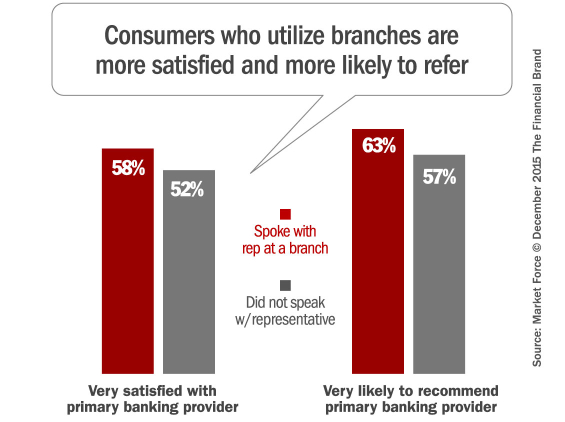 Market Force Information uncovered four major factors that impact a customers’ satisfaction in banking: Transparency & Fairness, Security & Reputation, Ease of Doing Business, and Location Convenience. Researchers probed consumers along a range of criteria in each major category, and found an 81 percentage-point lift in satisfaction levels when banks perform well in all four areas.

3. EASY TO DO BUSINESS WITH

12% of consumers said they are thinking about switching from their current retail bank to a different retail bank. The primary reasons given centered on both dissatisfaction with fees and the service provided by the institution, particularly when it comes the customer’s financial well-being. 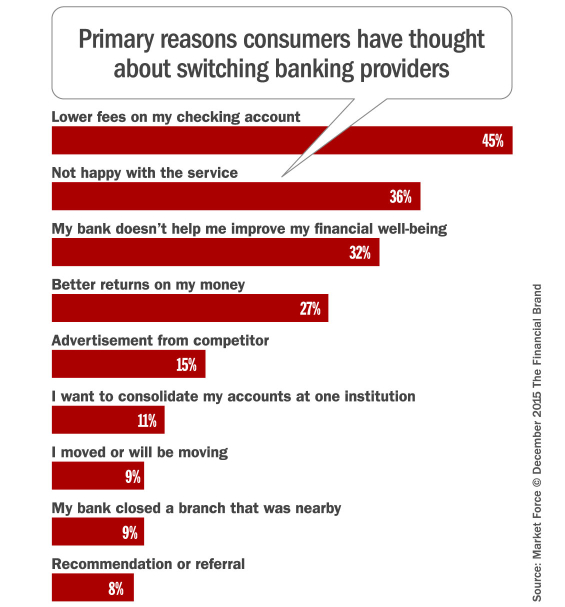 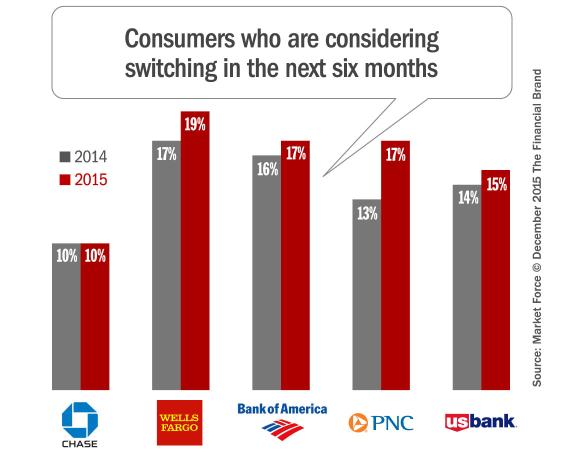 “The national brands evaluated perform well on the basics, such as handling transactions and offering branch convenience, but they’re missing the mark in areas that enable them to build trust,” says Cheryl Flink, Chief Strategy Officer for Market Force Information. “For instance, most consumers don’t see their banks investing in their financial well-being, customizing services to their needs or helping them with money-saving tools.”

In the study, Chase ranked first in three out of four areas that impact satisfaction, including transparency, security and convenience. U.S. Bank was voted the easiest to do business with, and came in second in all other areas. Out of the five banks studied, Bank of America was last in each attribute.

Market Force Information singled out problem resolution as one of the biggest drivers of both customer satisfaction and referrals. 43% of respondents in the study said they had experienced an issue with their bank or credit union that needed to be resolved. Of those, 89% said the issue was “resolved,” but only 47% said it was resolved to their satisfaction. When consumers’ problems are addressed successfully, 69% say they are “very satisfied” with the institution and 80% say they are “very likely” to recommend that institution in the future.

For the 53% of respondents who experienced a problem that was not resolved to their satisfaction, satisfaction levels and referral propensity plummet. Less than one in four of these consumers said they were satisfied (24%) or were likely to refer others to the institution in the future (23%). 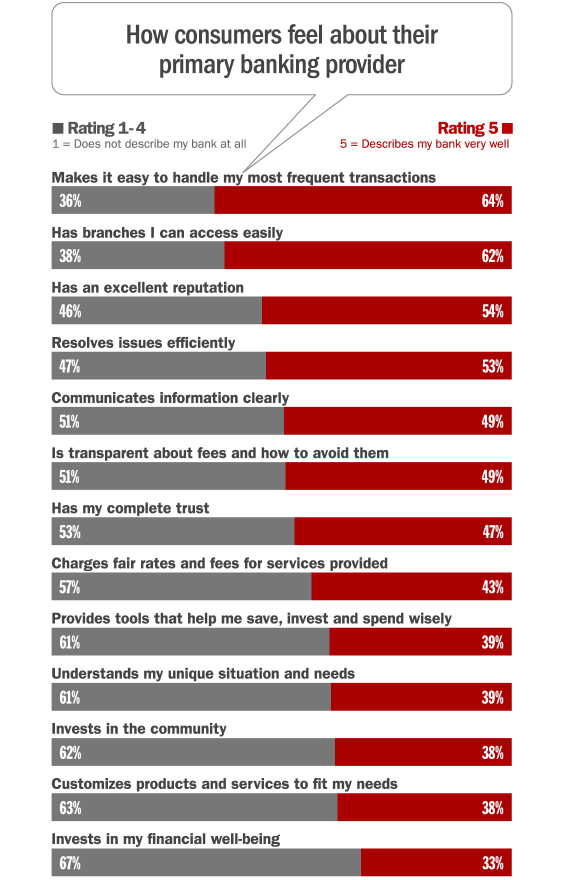 Market Force Information identified five major themes in its research. The firm stresses the importance of the overall experience, highlighting critical service, satisfaction and switching issues that retail financial institutions must focus on:

1. Switching and attrition. One in five banking customers are not satisfied with their relationship with their primary bank. This makes brands vulnerable to losing market share. Overall, 12% of all banking customers considering switching banks in the next 6 months, with individual brands ranging from 8% to 19%.

2. Drive higher levels of satisfaction. To create true loyalty and not simply complacency, banking providers need to deliver a superior experience that makes it easy to do business with the bank and builds a sense of trust. This means focusing on consumers’ financial well-being with great advisory services and creating greater transparency regarding fees.

3. Banking brands have opportunities to differentiate. Banking consumers scored their primary banking providers low with respect to concern with the customers’ financial well being, understanding unique needs, and even community investment.

5. Click-and-mortar strategy. Consumers have clearly embraced mobile banking solutions, with nearly three quarters having at least downloaded their institution’s app. However, a banking app does not replace the consumer’s need to interact with frontline representatives. Real relationships — built and maintained face-to-face in the physical world — still matter.