In an effort to satisfy the demands of an increasingly digital consumer, the banking industry's focus is moving away from responding to new regulations to investing in the technology and talent required to retain customers and respond to increasing competition from fintech firms.

In the eighth installment of the annual banking survey from Temenos in association with Capgemini, the primary takeaway is the significant change in the industry’s priorities from a focus on responding to regulations and compliance to a greater emphasis on building a ‘digital bank’.

This shift in emphasis manifests itself in the fact that updated technology is banking’s biggest priority this year (up from number 4 last year) and that, for the third consecutive year, the industry’s biggest challenge was satisfying the demands of better-informed and less-loyal consumers.

While the regulatory burden appearing to be stabilized, IT modernization has become the number one priority in 2015, moving up from the fourth position in 2014. Innovation is the industry’s second-biggest priority, cited by 24% of respondents (unchanged from 2014), while there was a big drop in the number of banks globally that noted investing in channels was their biggest priority.

The one exception to this drop in channel importance was in the Americas, where 24% of respondents cited channels as their biggest priority against 14% in 2014, with 15% saying that branch investment was their top priority. The variation to the global norm was most likely the result of the significant over branching in the U.S. compared to the rest of the world. 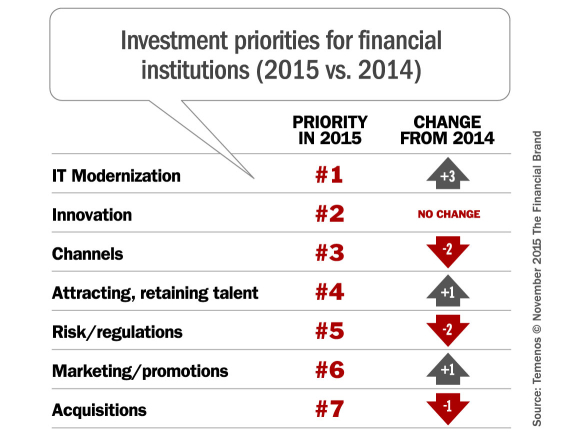 According to Temenos, “Banks are investing in capabilities such analytics and channels that will help deliver a better customer experience, but their biggest challenges in meeting their digitization goals remain the constraints of legacy systems (27%), maintaining IT security (14%), coping with channel and device proliferation (19%) and resourcing and budget constraints (33%).”

Another barrier facing the banking industry in their quest to modernize their technology is the hiring of the right talent. As banking organizations compete with all industries for many of the same types of skills, banking is not viewed as the most exciting career opportunity, especially by millennials.

The trend of investing in IT modernization is not expected to subside in the near term. IT budgets are forecast to be up strongly again in 2016, with 64% of respondents anticipating higher spend over the next 12 months. The delta between the number of institutions expecting higher IT budgets compared to those expecting lower budgets is at its highest level since Temenos began the survey. 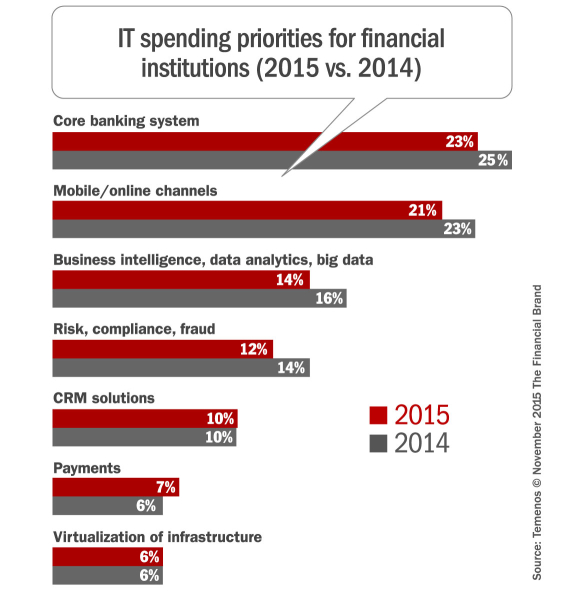 With regard to investment in innovation, the biggest objective remains reducing fees and rates to end customers (cited by 17% of banks). This is most likely in response to fintech competition. Beyond pricing priorities, banks are looking to introduce products and services that can help improve the customer experience, such as rewards and loyalty (cited by 10%), offering PFM and other tools to help customers to manage their finances better (cited by 8%) and investing in real-time, location-based offers (cited by 7%). 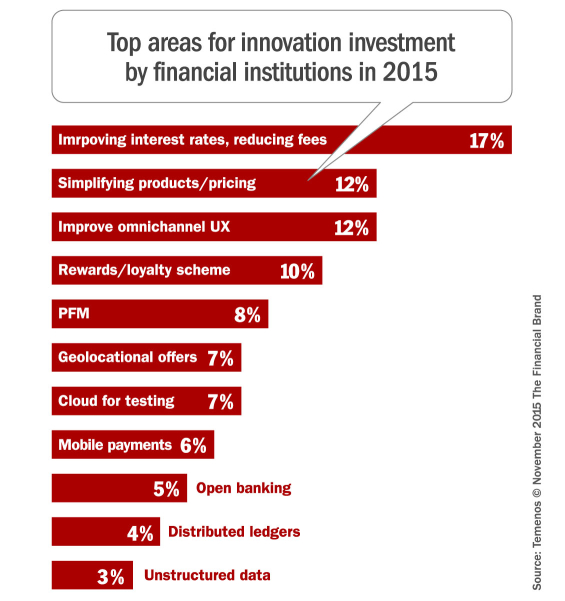 Almost one-in-four bankers (22%) believe that retaining current customers is their biggest concern, with the highest readings for retail banks (24%) and private banks (25%), in alignment with the two sectors that have seen the biggest shifts in how customers consume their services.

With profitability and regulations being continued concerns, banks remain very concerned about retaining market share due to tougher competition. Only 26% of respondents cited incumbent banking players as their biggest rivals. Banks see a significant threat coming from banking players not operating in their market today, such as overseas banks and challenger banks. But banks are most worried about the threat from non-traditional players, especially technology companies, such as Google, which were cited by 27% of respondents. 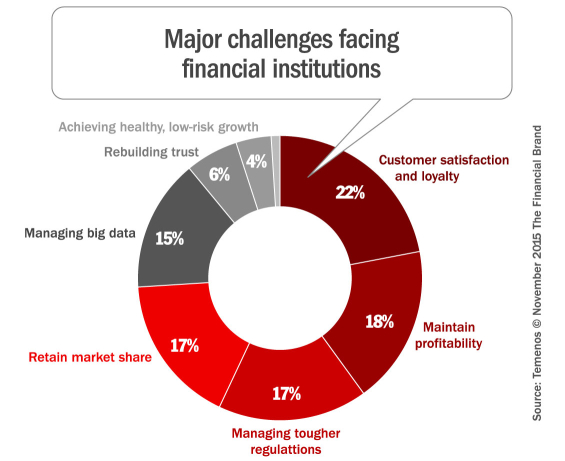 According to Michael Leyva, Vice President & Global Banking Practice Lead at Capgemini Financial Services, “The findings from this study are consistent with what we observe in our conversations with banks and similar research we’ve conducted in the market. Banks are well aware of competitive threats, especially from the challenger banks and “branchless” direct banks. They understand the customer loyalty landscape is changing (e.g. linked to social media and collaborative loyalty programs) and are changing their strategic priorities accordingly, with more emphasis on fostering innovation, enabled by renewing technology and hiring the right talent. This is consistent with increases in IT budget spend we see, as banks recognize more focus needs to be on digital and supporting data/insights to provide greater customer value which in turn helps to protect the customer base in a highly competitive environment.”

As the digital consumer becomes more demanding and the technology to serve that customer continues to advance, there is a continued blurring of competitive boundaries where global players are beginning to emerge. The largest competitive threat, representing more than 50% of respondents are non-traditional competitors, such as technology vendors like Google (27%), fintech start-ups (14%) and new bank entrants (11%).

Large incumbent banks are seen as a larger competitive threat today, cited by 21% of respondents compared to 20% in 2014, In comparison, “Banks are becoming less concerned with the threat from small banks, which typically lack the nimbleness of new entrants and the economies of scale of the large banks,” states Temenos.

Finally, 22% of respondents stated they were concerned about the threat from banks not currently operating in their market today, such as challenger banks and overseas banks. 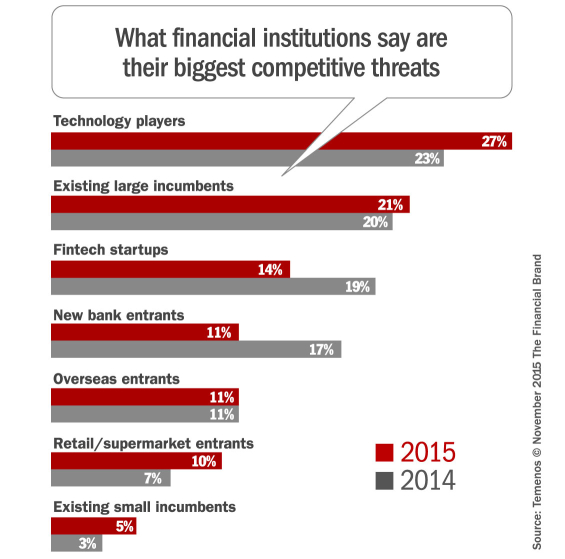 A Commitment to an Improved Consumer Experience

Now more than ever, banking needs to go beyond lip service when it comes to improving the consumer experience. To serve a digitally-engaged customer, this means going beyond using traditional demographic and account level analysis to include contextual and locational insight that will enable the right solutions to be offered at the right time and place.

It will also involve recommending products and services, (both in-house and provided by outside providers), that will add value and potentially generate revenue. Temenos calls this ‘experience-driven banking’. 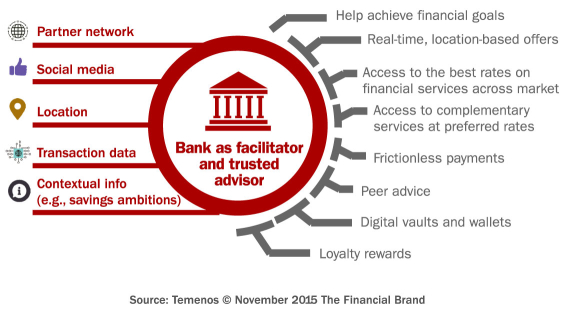 It will take make more than just technology changes for banks to offer experience-driven banking, however. According to Temenos, cultural change will be needed. “Banks will need to move from being data custodians that attach primacy to keeping data secure, to being data analysts that seek insights from customer data. It will also necessitate data being seen as a global corporate priority, not just an IT function,” says Temenos.

Ben Robinson, Chief Strategy & Marketing Officer at Temenos, commented, “As the burden of new regulation diminishes, banks are concentrating on readying themselves for a more digital world, characterised by lower customer loyalty and new, multiform competitors. What is encouraging is the extent to which banks are making the right moves, investing in acquiring the right talent, upgrading their distribution channels and replacing their ageing IT infrastructure. Technology modernization, especially in areas like core banking and analytics, is essential to delivering richer and more personalised banking experiences. And only through increasing customer value-add can banks protect themselves against a more competitive environment.”