Despite an increasing level of awareness of mobile payment options, usage at point-of-sale retail locations remains low. To stimulate mobile payment use, financial marketers should test discounts and rewards while improving the consumer experience.

The 2015 North America Consumer Digital Payments Survey found that while the number of North American consumers who know they can use their phones as a payment device jumped nearly 10 percentage points since last year, to 52%, actual mobile-payment usage remaines flat. The percentage of consumers who used their mobile phones to make at least one payment a week grew only 1 percent, from 17% in 2014 to only 18% this year.

“Though it’s clear that consumers are aware that they can make payments through their phones, continued use of existing payment methods — such as credit cards and cash — and slow retail adoption of modern card readers has caused usage levels to remain stagnant over the last year,” said Robert Flynn, managing director for Accenture Payment Services in North America.

“This is a clear indicator to banks and retailers that, although the digital transformation in payments is progressing, there is still a long way to go before we reach broad market adoption.”

Accenture’s findings shouldn’t come as a surprise to the industry. Despite all the hype about options such as Apple Pay, consumers are still willing to use plastic and cash at the physical point of sale. Another aspect of the study that shouldn’t be a surprise is that high-income respondents, with a household income of at least $150,000, are the most likely to use mobile payments, with 38% doing so at least weekly. Almost a quarter of millennials surveyed — those aged between 18 and 34 — are also making mobile payments at merchant locations at least once a week.

Interestingly, despite being introduced just a year ago, Apple Pay accounts for 68% of in-store mobile phone payments in the United States. These findings support Apple’s first quarter fiscal year 2015 earnings call report that $2 of every $3 in contactless payments are made with Apple Pay. 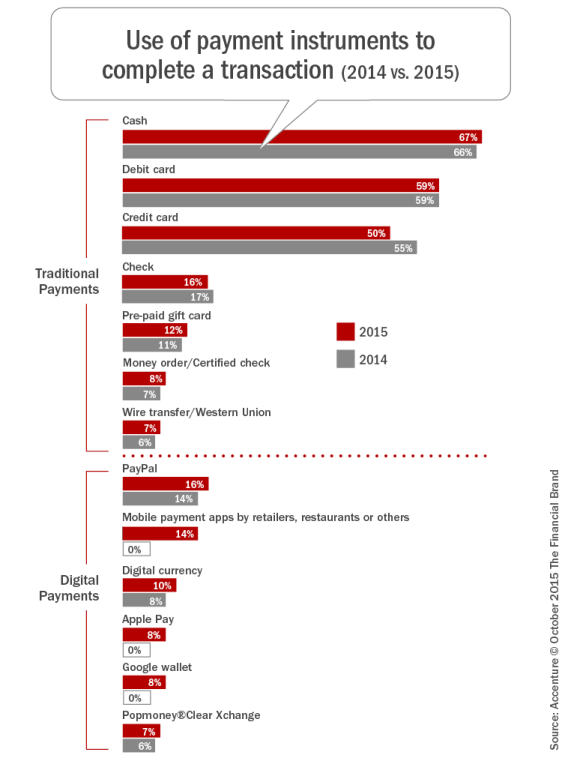 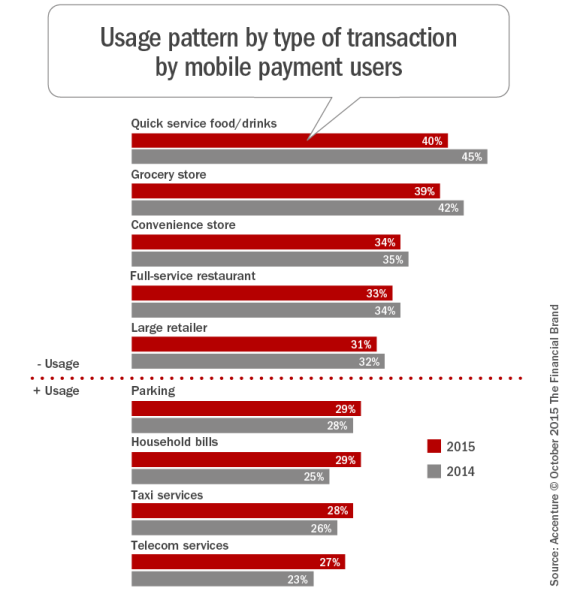 The Key to Digital Payments Growth

The key to growth is convincing moderate and non-users that mobile payments can add value. The survey found that rewards and other incentives could accelerate mobile-payments adoption. Slightly more than three of four consumers who currently make mobile payments say they would increase their usage if offered discount pricing or coupons based on past buying behavior or if they received reward points.

Below are some of the top features that would sway more than half of the non-users to start using mobile payments: 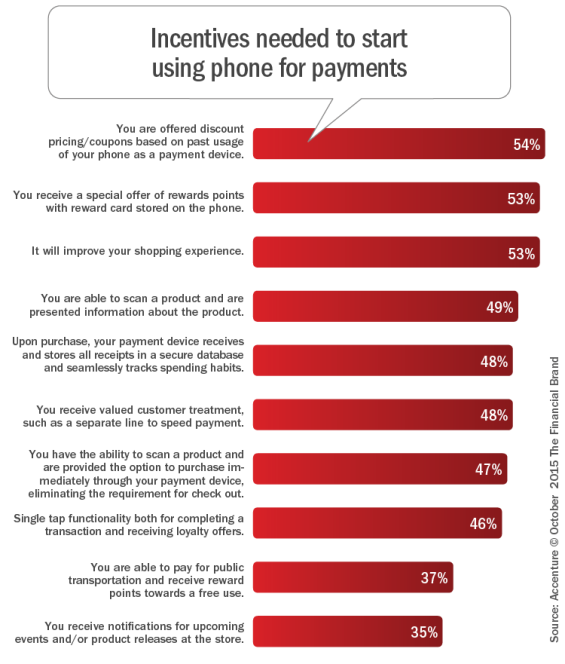 “Although smart phones are ubiquitous, mobile payments are not yet easier than other payment forms, Flynn told The Financial Brand in an exclusive interview. “It is still uncertain what the catalyst will be to greater consumer adoption. But our survey sheds some light on that question. Consumers’ interest in digital payment rewards that are truly tailored around them is an opportunity to incent mobile payments adoption and build customer loyalty.”

Banks and credit unions should also offer a digital version of customer experiences that are commonplace with plastic cards. For example, mobile payment users want assurances that fraud would be covered. They also want to receive a real-time alert when there is suspicious activity on an account and receive a digital receipt when a payment has taken place and for payments to be seamlessly integrated with consumers’ daily lives.

It is a bit difficult to discuss emerging trends in payments when the conversion to EMV, that was supposed to ‘change payments’ on Oct. 1, came and went with little fanfare at many merchants (or banks). Despite having almost three years to prepare, banks still have not completed the distribution of enhanced cards and many merchants still don’t have the capability to accept these cards.

One discussion to come from the EMV conversion process has been the debate over chip-and-signature vs. chip-and-PIN, the latter of which is the more secure option when it comes to chip cards. The FBI created confusion when it issued a warning that urged consumers to use a PIN with their cards. The problem was that the majority of EMV cards in circulation are not capable of working with a PIN.

Looking a bit more into the future, the survey found continued consumer interest in wearable or connected payment devices. While still in a ‘digital infancy’, one in five consumers (20%) said they have used a wearable device to make a payment at least once, and the same number of respondents reported being interested in making a payment through a connected smart device such as a smart appliance or a smart car.

The Accenture survey also called attention to the level of peer-to-peer payments for the first time. Only 15% of consumers said they make a P2P mobile payment either daily or at least weekly. Forty percent said they never made such a transaction, while 14% percent said they were not aware of mobile P2P payments.

Convenient, personal and on demand, the digital evolution has raised expectations of consumers to want friction-free payments that mesh with their daily lives. As this evolution continues, payment providers must extend the overall payments value proposition which will, in turn, improve the overall consumer experience.

Accenture came to three conclusions around the types of digital payments solutions consumers are seeking. 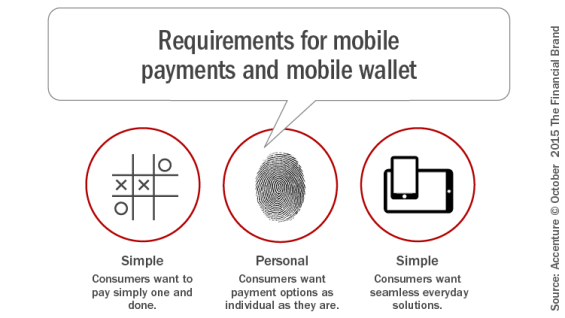 Albeit at a slower pace than the media would lead consumers to believe, the industry is making progress. Accenture reports, “As consumer awareness and confidence grow – and more merchants modernize their point-of-sale infrastructure – the pendulum will continue to swing to mobile payments.”

“Consumer appetite for better ways to pay is clear, Flynn told The Financial Brand. “While cash is still king today, our survey shows that by the end of the decade, use of cash will continue its decline and digital payments will increase. To win in digital payments, providers must keep it simple, make it personal, and ensure that payment methods are seamlessly integrated into everyday life. Revenue models focused on transaction volumes at the least cost will be in a race to the bottom when competing with digital payments.”

Please Note: Accenture does not advertise on The Financial Brand, and no compensation nor consideration was given to publish this story or provide the download link.