With the vast majority of banks and credit unions having implemented mobile banking services, the next step is to concentrate on building a mobile payments strategy that serves the increasingly digital consumer.

In a world where we’re connected to each other with mobile and other digital communications, there’s no excuse for financial institutions not offering payment options that are both contextual and instantaneous. Other countries, such as the U.K. are far ahead in achieving this reality, and are quickly moving towards a totally digital payments future.

With organizations like Starbucks, PayPal, Amazon, Square, Google, Apple and other third parties supporting digital payments, we’ll increasingly see consumers move from plastic cards to mobile payments because of speed, safety and convenience. This shift in behavior will occur with or without the support of traditional financial institutions.

According to a 66-page Federal Reserve Bank of Boston report, the percentage of U.S. banks and credit unions offering mobile payments as of August 2014 was a dismal 10%. This is expected to change rapidly, however, as the number of institutions that plan to offer mobile payment services by the end of 2016 is expected to reach almost 60%.

It should be noted that this survey was conducted between July and August 2014, two months before the Apple Pay mobile wallet was launched. As a result, it is possible that some of the “no plans to offer” FIs might have responded differently had they been aware of what Apple proposed, and some of the banks and credit unions already planning to offer mobile payments may have since expedited their payment strategies. 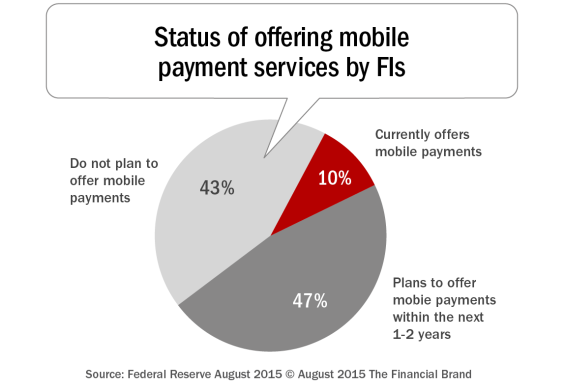 Alternatively, both banks and credit unions plan to use mobile payments to attract new customers, with the belief that retention of customers was not as critical due to almost non-existent service penetration. Interestingly, banking organizations surveyed did not see the offering of mobile payments to be in response to competitive pressures, and did not consider revenue potential as a driver for offering enhanced payment products. 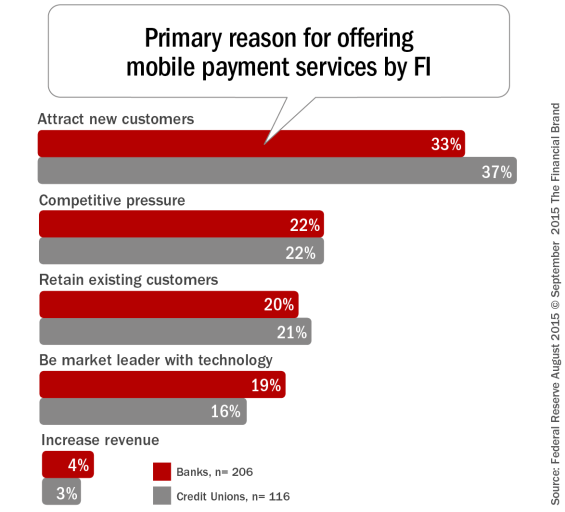 The Power of ‘Coopetition’

Breaking with tradition, legacy financial institutions surveyed recognize the need to collaborate with other businesses that may have specialized expertise (or a head start) in order to get to market more quickly. Apple Pay is an excellent example of this strategy in the U.S.

Partnering with third party providers was selected by the most FIs (both banks and credit unions), while working with card networks (e.g., MasterCard, Visa, American Express, or Discover) was the second highest choice. Partnering with a retailer or a digital/NFC wallet provider received the lowest levels of support, but this has already changed as CurrentC, Apple Pay, Google Wallet and Samsung Pay have become more viable partnering alternatives. 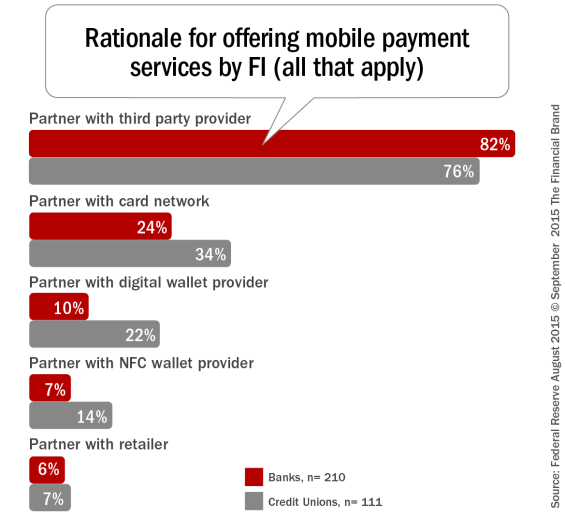 When respondents were asked to rank the importance of mobile payment strategies, 41% ranked ‘partner with white label mobile wallet provider’ as the most important. According to the FRB report, “This clearly indicates that FIs would prefer to use their own brand for the mobile wallet to maintain connections to their customers.” ‘Linking to a mobile NFC solution provider’ was selected as the second most important strategy.

The top two barriers that FIs perceived as hampering efforts to offer mobile payments were ‘market immaturity/fragmentation’ and security. The challenge will be for banks and credit unions not to ‘wait on the sideline’ as both of these barriers play out in the marketplace. A traditional ‘wait and see’ approach is not a viable strategy in a marketplace that is moving so quickly.

While market fragmentation makes it difficult to know who to partner with, and which offering may be sustainable over the longer term, this fragmentation can change almost overnight. In addition, numerous security solutions are being introduced both on the device and platform level, ultimately making mobile payments more secure than today’s heavily used, and somewhat dated options.

As we look at the lowest ranked perceived barrier to offering mobile payments, it needs to be recognized that the consumer is the ultimate judge as to whether digital payments provide a greater value than current alternatives. The key will be to effectively communicate these benefits ‘to the masses’ better than the industry has done for mobile banking up until now. 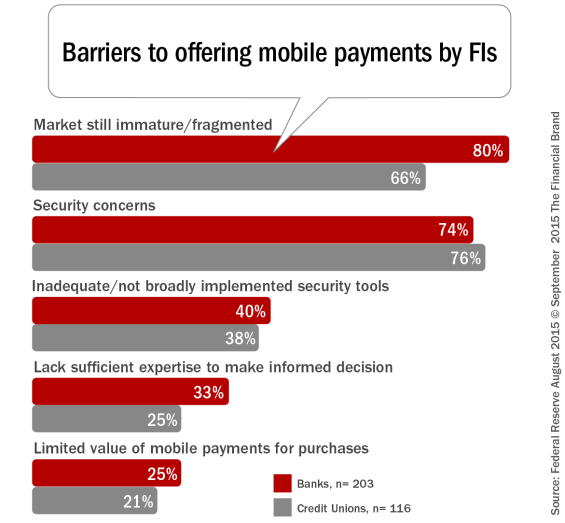 The Future of Mobile Payment Offerings

There is an extraordinarily competitive environment for both mobile banking and mobile payment services, which is clearly demonstrated by the FRB survey’s findings discussed in this article and previously. The digital consumer expects their bank and credit union to offer advanced mobile banking and payment services. In fact, given the extensive media coverage of fintech, an institution will be at a major competitive disadvantage if they aren’t positioned with a proactive strategy for meeting the banking and payment needs of their increasingly demanding customers and members.

The survey results reinforce the reality that most institutions don’t have the market power to develop and succeed with their own proprietary payment solution. “The vast majority of FIs will need to build mobile payment systems that are interoperable and work with common standards,” stated the FRB report.

Finally, the FRB study believes all organizations should be assessing their options for mobile payment services for the following reasons:

As was stated in the review of advanced mobile banking services previously, sitting on the sidelines is not a viable option.

The information presented, while representing only five of the 12 FR Banks, is pertinent to most districts for several reasons. First, this is one of the largest surveys about mobile banking and payment services at FIs that has been done in the U.S. It is also noteworthy because most of the data comes from banks and credit unions with less than $500 million in assets – a group for which information is not readily available. Additionally, survey respondents are geographically dispersed at institutions in 25 states and Washington, DC, which provides a broad picture of mobile banking services across the U.S.