Subscribe Now Get The Financial Brand Newsletter for FREE - Sign Up Now
Mobile banking is moving to near universal availability, but customer uptake rates continue to remain relatively low according to a report from five of the Federal Reserve Bank districts.

According to a survey released from the Federal Reserve Banks of Atlanta, Boston, Dallas, Minneapolis and Richmond, 78% of banks and credit unions offered mobile banking services in 2014, with an additional 16% planning to launch mobile offerings in the next one to two years. Despite this nearly universal availability, just 4% of financial institutions reported that more than half of their retail customers were enrolled and active users, while 80% reported that less than 20% are active mobile banking users.

The survey found that mobile banking offerings are driven by the need to attract and retain customers and compete with other institutions. Financial organizations believed the biggest barriers to greater acceptance were the lack of consumer awareness and security concerns.

The question is whether larger issues may be the cause, and whether these same issues may hamper the acceptance of mobile payments in the future.

Using smartphone penetration and usage as a key indicator of potential mobile banking and mobile payment adoption, research from ComScore has found that the percentage of the U.S. population over 13 years of age that owns a smartphone continues to increase, reaching 75.8% in 2015. This percentage has been growing steadily year over year and is forecasted to continue to rise.

This increase in technological potential has resulted in new mobile banking functionality being introduced and new fintech players entering the marketplace. These drivers of change across the expanded mobile ecosystem are highly interconnected, and are pushing the window for innovation in the financial services industry.

Furthering this potential has been the introduction of more powerful devices as well as improved contextual applications in other industries, such as travel, retail, hospitality and communication, connecting consumers to digital solutions 24/7/365 wherever the consumer wants to research or purchase products or services. 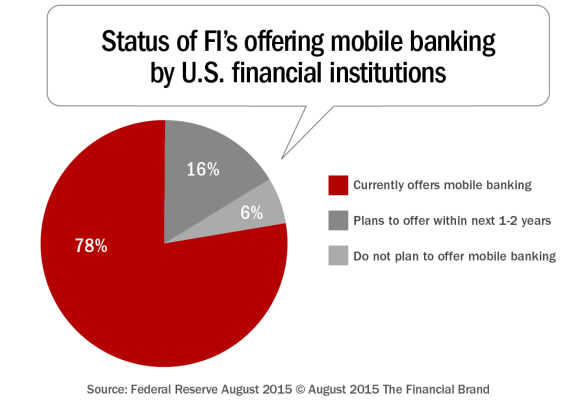 In addition, in those cases where all three platforms are not supported, 36% of the FIs offer downloadable apps, 18% support mobile websites, and 8% offer SMS either singularly or in combination with another platform. It was found that more organizations are moving away from SMS except to support alerts, balances and limited transaction history.

To determine the level of mobile banking support by financial institutions, the survey asked about 18 primary offerings, ranging from account and transaction information to funds transfer and payments. Five basic services were offered by about 75% of the organizations surveyed, with most of the remaining 25% planning to offer them by 2016. Five additional services were offered by at least half the institutions. 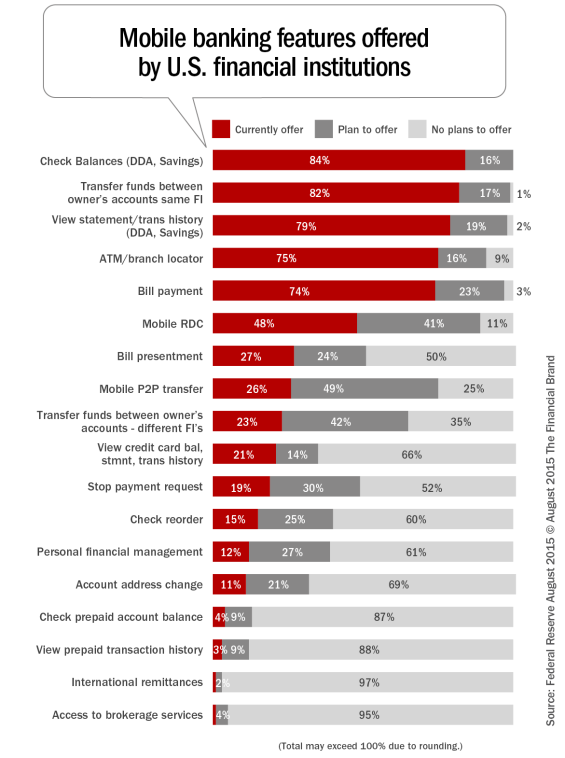 Three informational capabilities are considered standard for any mobile banking program – the ability to check DDA and savings account balances, the ability to view statements and transaction history, and the ability to locate ATMs and branches.

Almost nine in ten organizations currently offer or plan to offer mobile remote deposit capture within the next 24 months. In a study in March 2015, the Federal Reserve Board found that 51% of mobile banking customers used mRDC in 2014.

Finally, while mobile enrollment and single log-in functions are close to being mainstream, the same can’t be said for the ability to open a new account with a mobile device. As noted in the Digital Banking Report, Guide to Digital Account Opening, only 26% of financial institutions plan to offer account opening functionality by 2016. This runs counter to the desire to digitize the basics of banking. 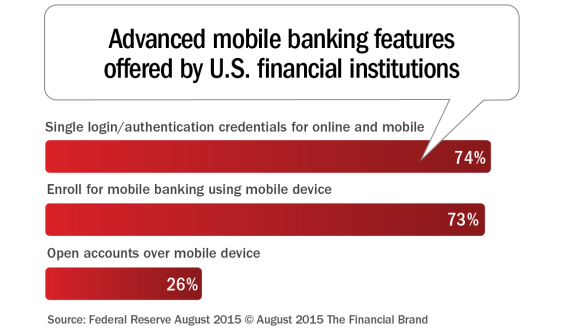 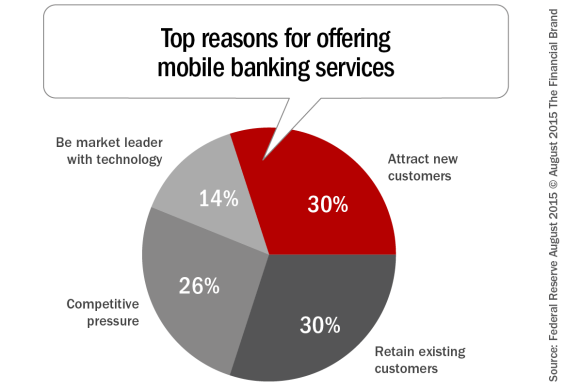 Given that a large percentage of organizations surveyed were smaller institutions and in many cases slower to introduce mobile banking to the marketplace, it is not surprising that the primary mobile banking benefit mentioned by organizations was to retain their current customers/members. In addition, while few organizations have done all that is needed to optimize efficiency or cost reductions (reduce branch staff and close/shrink offices), these benefits were also considered important. 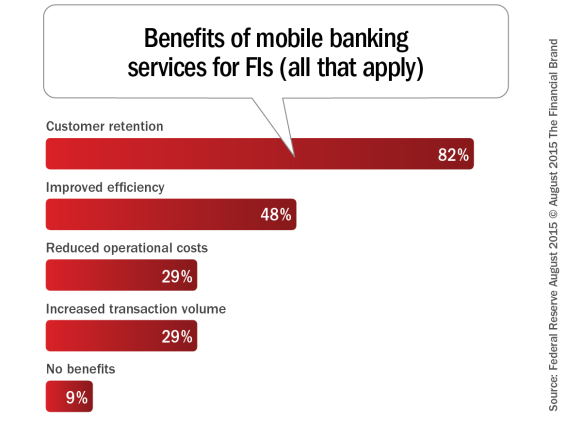 One of the primary reasons mobile banking penetration and usage may not be meeting expectations for many institutions could be because the marketing of the benefits of mobile banking is done with ‘passive’ media (web site marketing, in-branch signage, mass media) as opposed to direct communication (direct mail, email, social). In fact, while organizations may feel they are doing well by promoting mobile services within the branch, this channel is becoming less effective daily due to reduced branch traffic.

As has been found in other studies, the use of the mobile banking app to promote usage, while highly effective if done well,  is close to non-existent. 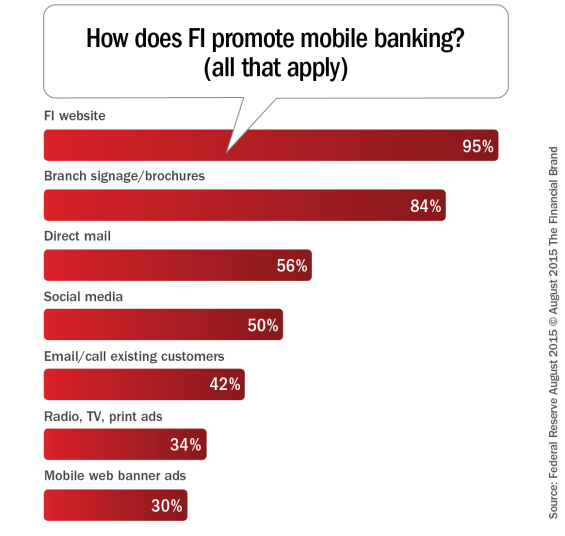 While mobile banking adoption rates are surprising low, there was a significant jump in consumer adoption rates from early 2013 to July/August 2014 (when this survey was conducted). In fact, for the first time in the survey’s history, 2014 saw rates adoption rate ‘jump’ from “less than 5 percent” to “5 percent to 20 percent,” or more.

The largest group of FIs (52%) has active users in the 5-to-20% adoption range, with 16% of FIs having active mobile banking users ranging from 21-to-50% of their retail customer base. Although only 4% of the FIs have more than 50% of their retail customers actively using mobile banking, the shift from 2013 to 2014 represents substantial progress, especially given that most respondents are smaller banks and credit unions. 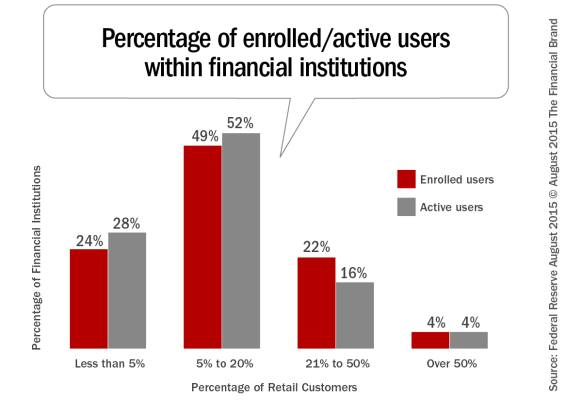 Seventy percent of FIs perceive the “lack of customer awareness” and “security concerns” as top barriers to broader adoption of mobile banking. The results are consistent across districts as well as for banks and credit unions, with a difference of less than three percentage points between bank and credit union responses. 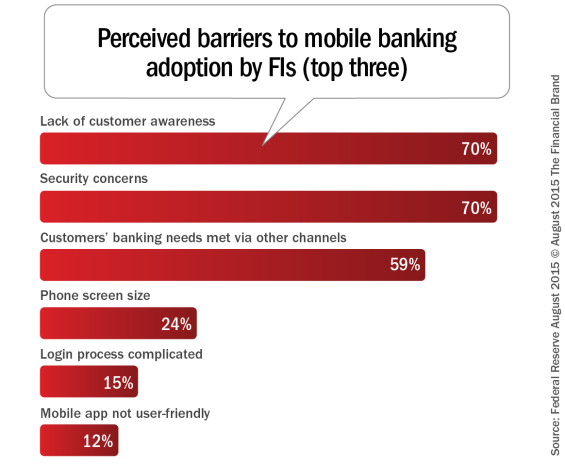 The Federal Reserve Board’s consumer survey results are in line with what FIs’ perceive as barriers to customer adoption, with 86% of consumers saying their banking needs were being met through other channels, 73% not seeing any reason to use it, and 62% being concerned about security.

The Future of Mobile Banking Offerings

Not only do active marketing and engagement strategies need to be implemented, but enhancement of offerings must be prioritized. From contextual engagement capabilities, to differentiated small business services and optimized mobile account opening capabilities, banks and credit unions must exceed expectations that are being set by non-financial industries.

As stated in the study, “Individual financial institutions must, at a minimum, keep pace with the market. Falling too far behind the curve is dangerous. With the exception of technology companies, mobile is not an area where late entrants can leapfrog the market.”

The information presented, while representing only five of the 12 FR Banks, is pertinent to most districts for several reasons. First, this is one of the largest surveys about mobile banking and payment services at FIs that has been done in the U.S. It is also noteworthy because most of the data comes from banks and credit unions with less than $500 million in assets – a group for which information is not readily available. Additionally, survey respondents are geographically dispersed at institutions in 25 states and Washington, DC, which provides a broad picture of mobile banking services across the U.S.