Subscribe Now Get The Financial Brand Newsletter for FREE - Sign Up Now
Today's banks will become the "attractors" of the future--firms that RE-bundle the emerging set of banking services, providing the front-end interface and back-end integration.

It’s popular, in banking circles, to claim that banking has become “unbundled.” Proponents of this view love to point to the picture below as proof. 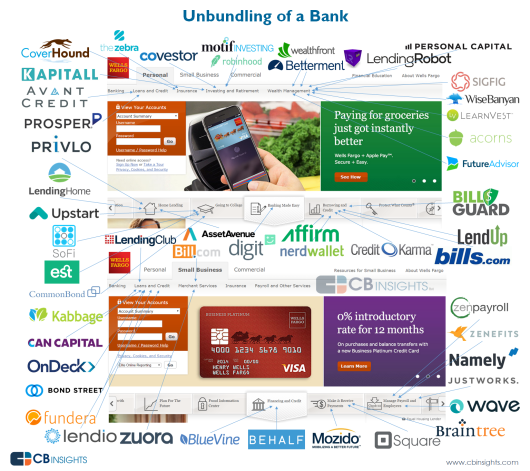 The noted banking expert (sarcasm) Marc Andreesen has written about the unbundling of banks. A more educated view comes from one McKinsey consultant writing in Medium:

Brett King had this to say: 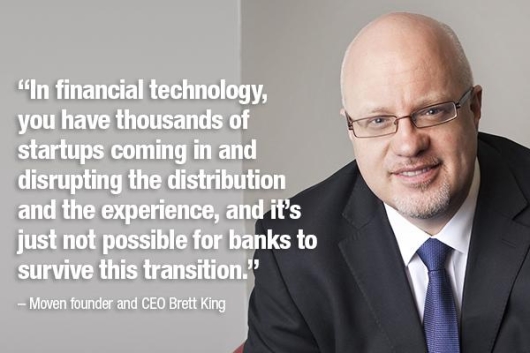 My take: The supposed “unbundling” of banking is a huge (and positive) opportunity for existing banks.

If I may toot my own horn for a moment (after all, it is my blog), I wrote about the “unbundling” of banking 15 years ago. While working for Forrester Research, I published a report titled Atomizing Financial Services, in which I predicted that, as a result of the Internet, financial services would see the emergence of many specialists–firms that provide a narrow range (or even one) set of services. Thanks to the distribution power of the Internet, these specialists would be able to deliver a limited range of services profitably–something that isn’t (and wasn’t) possible without the technology.

The “futurists” of 2015 are now seeing these firms emerging, and calling it as it happens. Nice work, fellas!

But there was something else I included in that Forrester report. It was a call for a type of firm called an Attractor: A firm that provided the front-end to all those back-end specialists, that integrated all the services, and that had the marketing muscle to “attract” customers in the first place.

The Marc Andreesens and McKinsey consultants of the world–while clearly seeing the emergence of many new players in banking–are failing to address one important question: How is this all going to come together for any one customer?

I’m in Las Vegas for the 2015 Financial Brand Forum as I write this. I’ve got half a mind (yeah, I know–I could stop the sentence there) to take a copy of that picture above (the “unbundling” picture, not the Brett King picture) out to the casino, show it to random people, and ask:

I’m betting that I hear mostly “No” to those questions (especially #4).

It’s great that all these firms are emerging to leverage (and create) technologies that create new banking-related services. Monetizing and scaling those technologies–that’s a different story.

The reality is that these startups represent more of an opportunity to existing banks than they do a threat to them. Existing banks have charters, money to invest, and (for the time being, at least) access to consumers.

I’ve heard Brett King characterize the startups as “death by a thousand cuts” (I hope I’m getting that right, and not putting words in his mouth). Sorry, Brett, but this isn’t an accurate characterization because existing banks don’t make money from the products and services that many of the startups provide.

Yes, there is plenty to learn from the Neobanks when it comes to value-added banking features and user experience. But no, the Neobanks are not disrupting the mainstream banks.

Startups don’t have the resources to create national-scale brands or become integrators of the vast array of banking-related services that are emerging. Yes, they have great design-sense, but no, they can’t pull it all together to scale it into something big.

Although…there may be one that emerges to do so. There is certainly the potential that a Google, an Amazon, or an Uber may emerge to integrate the array of emerging services and become a behemoth on the scale of a megabank (or even large bank). But I’d bet my last dollar there will be only one.

And it won’t be easy for that one company, because what makes this different from what a Google or Amazon did is a little thing the banking industry likes to call “regulation.” Google and Amazon didn’t have to deal with a bizarre and complex set of regulations to disrupt the industries they disrupted.

Today’s banks will become the “attractors” of the future–firms that RE-bundle the emerging set of banking services, providing the front-end interface and back-end integration.

In many ways, the business model of banks will shift from a pure B2C to a B2B2C model where there is revenue-sharing and pass-thru with specialists (today’s startups) who provide the core services that consumers pay for.

Amazon is a great model for what banks will become. Amazon doesn’t care what you buy as long as you buy it on Amazon’s platform.

The problem with today’s banks is that they do care what you buy–they want you to buy their products/services. By rebundling banking, banks of the future won’t care whose products/services you buy as long as buy them on that bank’s platform.

The banks that are threatened by all this are the smaller institutions. Relying on friendly, branch-based service isn’t likely to produce the level of revenue and profits needed to sustain a retail (i.e., consumer) banking business.