How are Millennials different than other demographic segments? These young financial shoppers don’t consider branches as important as their older counterparts. They prefer low-fee checking products and are more easily influenced by an institution’s reputation and promotions.

FindABetterBank is like Match.com for banking consumers, and around 40% of its users are under 30 years old. After shoppers on FindABetterBank select a checking account as their top choice, they’re asked why they’ve selected that particular checking product and institution. Overtime, we have observed that the population of consumers shopping online for checking accounts is very broad. For example, 20% of shoppers on FindABetterBank indicate they’re 50 or older and about 40% are under 30. These groups’ rationales for choosing particular checking products are different in some significant ways. 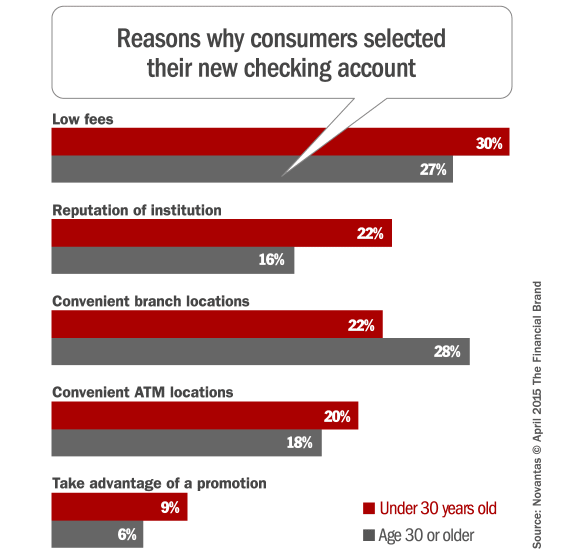 Millennials are more sensitive to promotions and reputation. Shoppers under 30 years old are a whopping 40% more likely than older shoppers to say good words from someone they know played a role in their top choice. Not surprisingly, they’re also more sensitive to advertising and promotions: Nine percent indicated that they selected an account because they wanted to take advantage of a promotion compared to 6% of consumers 30 or older.

Millennials want low fee checking products. On FindABetterBank, shoppers are presented with a list of potential checking products, each with a fee estimate based on their self-reported banking behavior. Millenials are the most likely segment to select a checking product with the lowest estimated fees. In the post-selection survey, Millenials were 12% more likely than older shoppers to indicate they chose a particular product because of low fees.