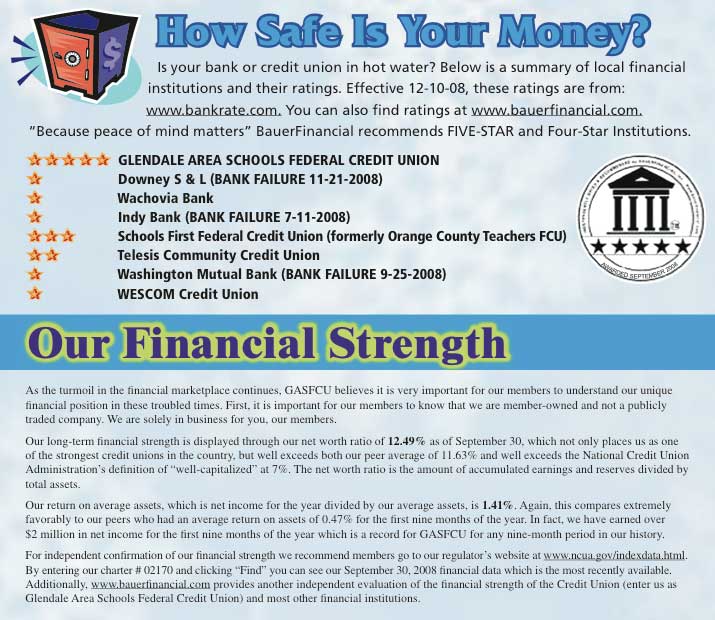 Last month, a credit union lodged a complaint with the NCUA about a rival credit union’s website. The credit union wasn’t happy that Glendale Area Schools FCU had publicized an unflattering rating from Bauer Financial.

The NCUA promptly fired off a letter to Stuart Perlitsh, CEO/Glendale Area Schools FCU. In the letter, the NCUA requested that Perlitsh remove the ad from their website as soon as possible.

Initially, Perlitsh ignored the request, citing free speech. But after a follow-up call from the NCUA, he finally decided to give in, saying he had “other battles to fight.”

“We’re operating in a low-testosterone environment.”

Perlitsh isn’t happy about it. He feels strongly that he did nothing wrong, And his board fully supports him. When Perlitsh showed the board the NCUA’s request, he said they were incredulous. They firmly believe it’s within their rights to exploit competitive weaknesses, certainly when drawing off public data.

“All I did was republish information that’s already out there. Yet the NCUA came down on us like we did something sacrilegious.”
— Stuart Perltish, CEO
Glendale Area Schools FCU

“I didn’t say ‘close your accounts,'” he told The Financial Brand. “All I did was republish information that’s already out there. Yet the NCUA came down on us like we did something sacrilegious.”

“I did the homework for people, and let them draw their own conclusions,” he added.

Perlitsh wondered why the NCUA was picking a fight with him when they could be concentrating on poorly-performing credit unions instead. He seemingly answered his own question by noting that “we’re operating in a low-testosterone environment.”

“GASFCU is proud of it financial strength and will market this competitive advantage,” he said. “It is all about capitalism, free enterprise, and freedom of press.”

The NCUA isn’t afraid to flex its muscle

This isn’t the first time the NCUA has put the smackdown on one of its own.

“What is safer than money in the bank? Depositing it at Resource One Credit Union. Your bank may be failing but Resources One is NOT! Don’t take chances with your money.”

And last October, TDECU elected to pull the plug on a “Safe & Sound” campaign after the NCUA sent them a similar request.

In its campaign, TDECU said, “Many banks and mortgage lenders made questionable loans that have gotten them, and their customers, into trouble.” TDECU was keen to point out that they didn’t “get into this kind of trouble.”

That may be true, but TDECU landed itself in hot water with financial regulators. TDECU’s campaign rankled both the ABA and FDIC something fierce, prompting a letter of concern from the FDIC. In the letter, Kelsey asserted that TDECU was implying — not stating, merely implying — that “deposits with banks are not safe and sound.”

The letter went on to say that “by casting aspersions on the health of the banking industry and implying that bank deposits are not safe and sound, TDECU has made irresponsible and misleading statements that could generate unwarranted public anxiety. Such statements may violate both federal and state laws, including the Federal Trade Commission Act and deceptive trade practices laws.”

The NCUA responded promptly, sending a firmly worded request to TDECU to kill the campaign immediately.

Does NCUA have the regulatory authority?

It appears that the answer is no, not necessarily. In all three cases, the NCUA has only “requested” the marketing be removed. Not once have they cited a regulation or portion of code governing their actions. And nowhere in the NCUA’s compliance guidelines is there anything about “finger pointing,” “fear mongering” or “playing nice with others.”

In an interview with The Financial Brand, an NCUA spokesperson said that there were indeed no specific guidelines concerning the issue, but they did cite other laws concerning deceptive advertising and unfair trade practices.

Nevertheless, the issue has created a bizarre allegiance of interests, including the NCUA, FDIC, ABA and various leaders in the credit union industry. All seem to be in agreement that anything that could be construed as an attack on the “safety” or “soundness” of any financial institution is unacceptable without exception. They are ready to kill any threat posed — big or small, real or imagined — to the insured deposits of America’s financial institutions, no matter what.

“Credit unions don’t need to criticize another financial institution regardless of its charter.”
— Michael Fryzel/NCUA Chairman

Whatever threats — real or implicit — the NCUA may be sending, they have proven to be exceptionally effective. Each of the three of the CEOs contacted by the NCUA have quickly backed down, basically saying they had “bigger fish to fry” and thus weren’t inclined to engage in a fight that could take a lot of time and energy.

According to one source, the answer is much more simple: “No one wants to piss off any regulators. Not right now.”

Bottom Line: Financial marketers will find themselves walking a fine line when they talk about their strength and stability, especially when you start drawing distinctions. If you feel tempted to succumb to your natural marketing instincts by attacking the safety and soundness of any financial institution (or just generically “those other banks”), be prepared for the wrath of regulators — backed by the full force and fury of the U.S. Government — to come raining down on you like a ton of bricks. Sure, they may just be playing a game of legal chicken…but then again, maybe not.