In December 2014, a survey fielded to bank shoppers on FindABetterBank asked them why they were shopping for a new checking account. One-third of shoppers under 30 indicated that they don’t currently have a checking account vs. 18% of shoppers 30 or older. Other significant age differences include: 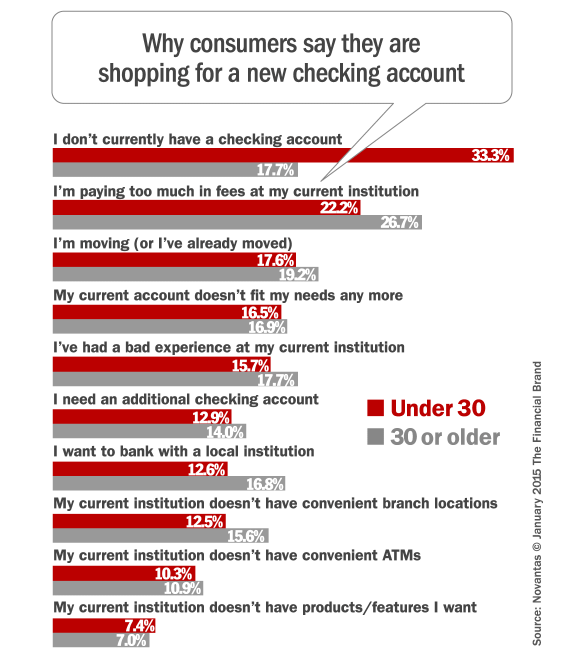 Dissatisfaction with account fees. Account fees are a big reason why shoppers are dissatisfied with their institution, but shoppers 30 or older were more likely to indicate high fees as a factor in their rationale.

Locality is important to younger shoppers. Nearly 18% of shoppers under 30 cited moving as a rationale for shopping. Clearly, this group of young shoppers associates banking with physical locations. And while older shoppers indicated more sensitivity to branch and ATM locations, it’s not by much.

Small institutions appeal more to older shoppers. This is not great news for community banks and credit unions. The bigger “brands” resonate more with younger shoppers. As opposed to 10 years ago, some banks are national brands (e.g., Bank of America, Capital One) and more recognizable to younger consumers. Banks like BofA and Chase have been able to extend the notion of convenience beyond the physical realm to digital channels. This message appeals more to younger shoppers.