In a pymnts.com article titled One Banker’s View Of Apple Pay Threats, the SVP of a large bank indicated:

“Though Apple gets a piece of every transaction, the company provides no help to banks in making sure their cards are “top of wallet” for use, or helping users decide which card is best of each situation.”

My take: Stop whining. Making sure your card is top of wallet, and helping users decide which card is best is YOUR JOB bankers!

Dear Bankers: What you give up for participating in Apple Pay (reportedly 15 basis points on credit and a half-cent on debit that comes out of the bank’s share of interchange) is for two potential benefits: 1) To be considered as one of the potential payment options in a transaction, and 2) Promise of a reduction in fraudulent transactions.

Participating in Apple Pay is like advertising. You pay to generate awareness and hopefully influence decision. When you advertise, there’s no guarantee that your efforts will lead to a sale. It’s the same with Apple Pay participation.

When you advertise, you hope to drive a prospect to take some future action in which you hope to make the sale. It’s the same with Apple Pay. Having your card in the wallet only gets you awareness and consideration–you must take additional steps to “make the sales” (i.e., get the consumer to choose your card).

[Note: At some point in the future–near or far–we’ll probably stop using the word “card.” But for now….]

“Contrary to many prognosticators, Apple Pay is likely to enhance the existing payments system rather than disrupt it. Apple Pay highlights the existing retail payment system’s openness to new and nontraditional players bent on enhancing it rather than on fundamental disruption.”

I agree. Grover goes to say:

“If Apple Pay is successful, it will erode the primacy of bank payments relationships, increasingly relegating financial institutions to a kind of back end utility.”

I disagree. In fact, the SVP quoted in the pymnts.com article (cited above) shows why this “erosion” won’t happen: Precisely because Apple isn’t doing anything to influence top-of-wallet status or help consumers decide which card is best in each situation.

This “erosion” isn’t going to happen as a result of Apple Pay for one other very important reason: Because the “primacy” of bank relationships isn’t built on payments. It’s built on “storage.” The reason banks have a primacy position in consumers’ financial relationship is because they park their money in banks. And as long as banks’ accounts (checking, prepaid, or whatever) are the funding sources for payments, banks have a position from which to compete.

What will banks have to do to compete in that scenario? The answer (in part) is “help consumers decide which card is best in each situation.” For better or worse, in some situations, the advising bank’s card may not be the best card. If that happens in a lot of a particular consumer’s situations, that bank (or that particular account at the bank) might not be the best one for that consumer.

This is why money management is more important than money movement to the bank of the future (which just happens to be the sub-title to my book, which will be published in the next couple of weeks).

There is a hierarchy of needs in banking. At the bottom level is security (or maybe APIs). On top of that is movement. And at the top, performance (you’ll have to read the older post to get the detailed description on each level–not going to repeat it all here). 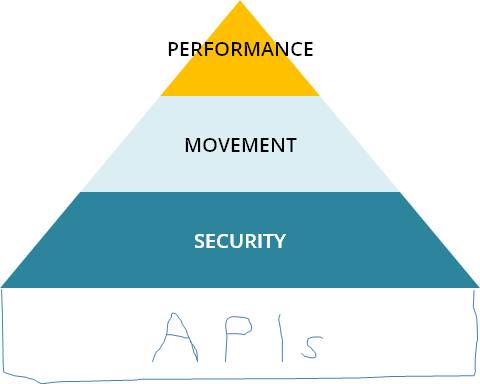 Apple Pay changes the security level, and changes one small component of the movement layer (i.e., the mechanism by which a consumer initiates the movement of money). But it does nothing to change the performance level. This is banks’ Apple Pay opportunity: To use data and create tools–built upon Apple Pay.

It’s not Apple’s job to do this. That’s not why they’re getting the cut of interchange. And, in fact, I don’t think Apple could do this if they wanted to do. I remain (for right or wrong) convinced that Apple just isn’t that good at data management and analytics (unlike a Google, for example). Maybe they can develop or acquire this competency, but it’s not in their DNA.