Salesforce.com released an interesting study regarding industry differences in Twitter engagement based on its analysis of nearly one and a quarter million tweets sent in 2013 by firms across a number of industries. One of those industries was financial services, who accounted for 94k, or 7.6% of the total number of tweets analyzed.

Oh, who am I kidding. The study is anything but interesting, and is simply the useless analysis of data that was done simply because the data was available to be analyzed. Why did Salesforce perform the analysis? Probably because they knew people would read the report, and that idiots like me would blog about it.

But not so fast. A deeper dive into the data reveals some anomalies. Two months–June and August–are serious outliers. In June 2013, FIs averaged nearly 46 retweets per tweet, while in August, FIs’ tweets generated, on average, almost 64 retweets per tweet!  Take those two months out, and FIs only averaged 9.6 retweets per tweet. Retweets of other industry’s tweets were far more consistent month to month. 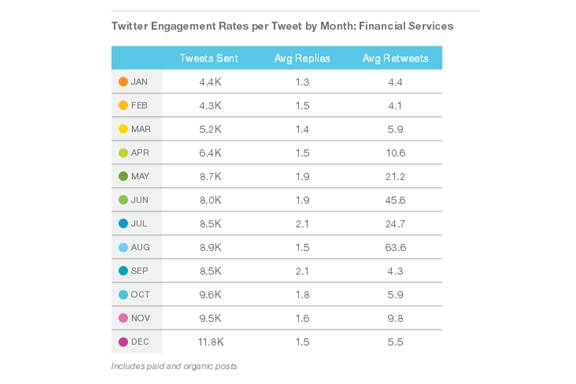 What happened in June and August? I have no idea. I doubt this really happened, but I can’t help but wonder if FIs were posting pictures of nude celebrities. Why would I even think that?

Financial services companies averaged nearly 47 retweets per photo tweeted in 2013! What in the world were they tweeting pictures of? New check designs? The new digital signage in their branches? I doubt those would generate many retweets. Naked pictures of celebrities, on the other hand… 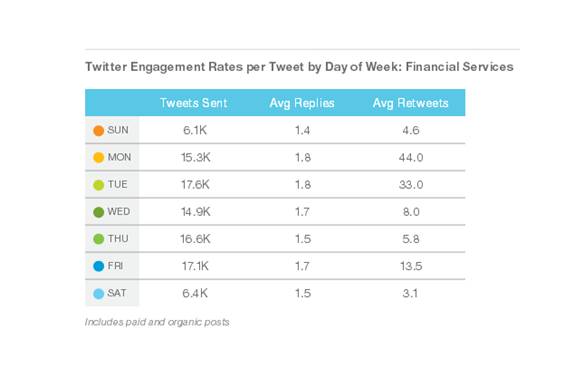 Some of Salesforce’s conclusions and recommendations need some rethinking. SF tells FIs that the “prime times to reach consumers who follow financial services companies are from 12:00 a.m. to 8:00 a.m. (the period with the most replies and retweets to company tweets) and from 6:00 p.m. to 9:00 p.m.”

Well, hold on here. The time analysis was done from the perspective of the central (US) time zone. An accurate analysis of tweets would look at the time the tweet was sent in the time zone of the sending firm. And anyway, who the hell is up at 3am reading–and worse, retweeting–tweets from their financial institution?

SF also instructs firms (of all industries) to “designate someone to oversee Twitter every day, during all hours of the day.” Let me get this straight. It’s OK for a company to have limited call center hours, and tell prospects and customers to call back during business hours, but it’s not OK to wait a few hours to respond to somebody’s tweet? Or is SF saying that because people retweet companies’ tweets at 3am, companies need to employ people to tweet at 3am? You’ve heard of scheduling tweets, right?

Bottom line: The good news is you only wasted about 5 minutes of your precious time reading this. Oh, and please be sure to tweet the link to this post. Preferably at 3am when, apparently, there will be a lot of people around to retweet it.