You probably think I spend my Saturday nights out at fancy dinner parties, going to the Symphony, or attending high-society social events. I do. It’s good to be me.

But this past Saturday night, the two older girls were home for the weekend, which put a crimp in my typical Saturday. So I took the family out for dinner to a restaurant close to the Burlington (MA) Mall. Needless to say, the Shevlin women had to go shopping after dinner.

After agreeing on when and where to meet up, I started walking around the mall. Outside of the Apple store (hardly a coincidence) was a kiosk selling LoopPay fobs and phone cases: 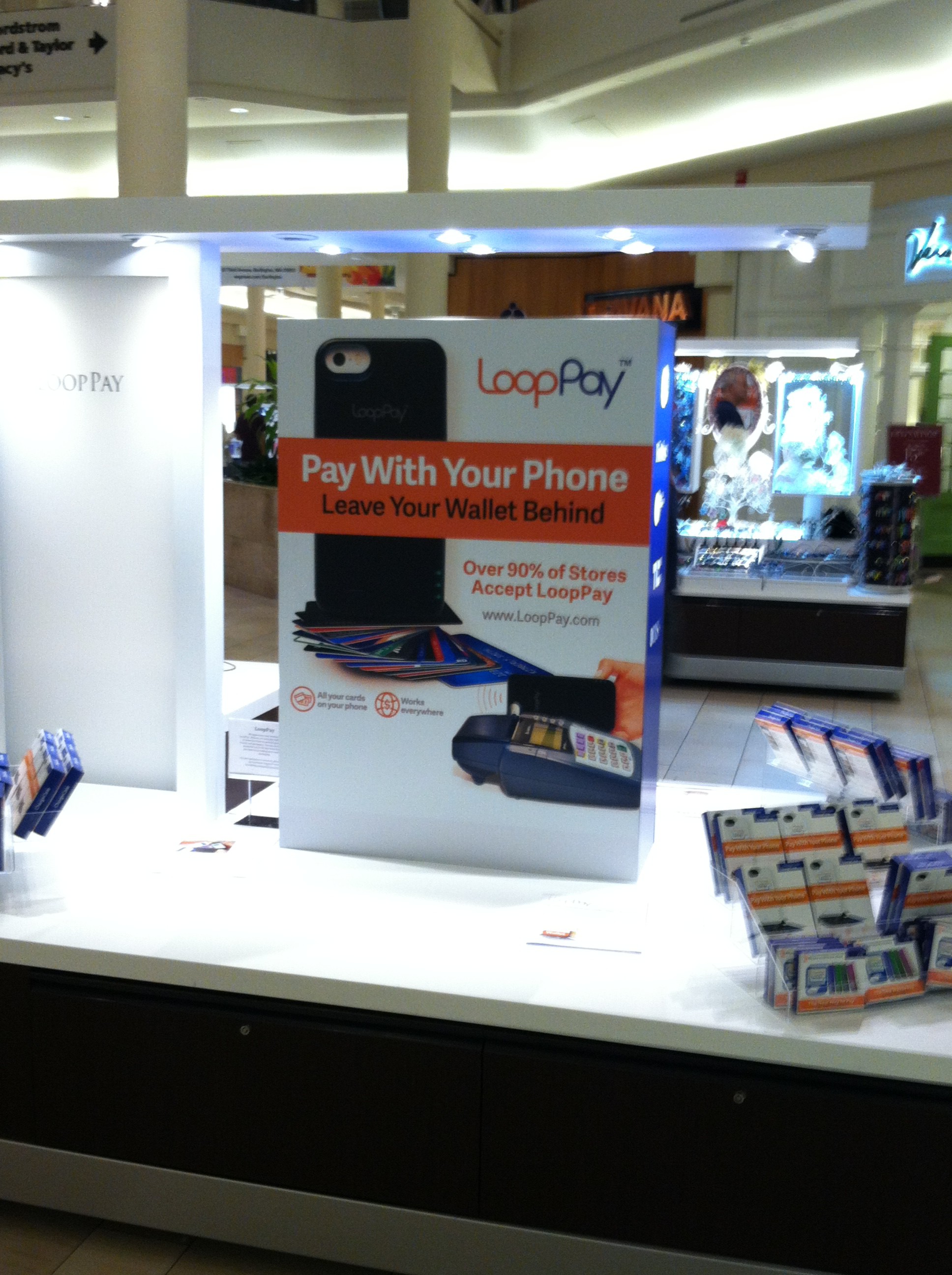 Sorry to say, but I lied, and said “no.” I figured, let me hear the pitch. I thought you’d be interested to hear how the conversation went. For the purpose of this post, I’ll refer to her as “Ms. Loop” since I didn’t catch her name.

Ms. Loop: Loop lets you store your credit card information on your smartphone, and pay directly from the phone, using existing card readers. Come around over here and I’ll show you how it works.

[I go over to where she’s sitting, holding a smartphone with a case around it].

You open the app, hold the phone over the card reader, and then select the card you want to use to pay for the transaction.

Here, you try. I have circulation problems, so sometimes it doesn’t work when I hit the icon.

[I press the icon, it blinks, indicating it was selected. The card reader (can’t remember if it was a Verifone or Ingenico unit) flashes “INVALID SWIPE”]

[I press the icon again, it blinks again, indicating it was selected. And again, the card reader flashes “INVALID SWIPE”]

Me: That’s ok. I trust it works in a real setting [yep, lied AGAIN]. Isn’t Apple Pay going to make this obsolete?

Ms. Loop: Absolutely not. Apple Pay works with only a fraction of merchants. Most don’t have the readers needed to accept Apple Pay payments.

Me: I thought I read somewhere that that was going to change, that they were going to issue new cards, and that retailers had to upgrade their card readers.

Ms. Loop: They are updating the cards. They’re called chip and pin. I lived in the UK for 5 months last year, and they work great. But a lot of mom-and-pop shops in rural areas aren’t going to upgrade their equipment.

[Do I blow my cover and argue this? No…I move on]

Me: How well are these selling here?

Ms. Loop: Not real well on a Saturday night. They sell much better on weekday afternoons, when the businessmen are here for lunch. I would say that a disproportionate percentage of sales go to young Asian or Indian men.

[Note: The Burlington Mall is on the Route 128 stretch outside Boston, where–probably literally–hundreds of high tech companies reside].

Me: Is that consistent with Loop’s overall sales?

Ms. Loop: I’m not sure, but it is different from what we found in New York City. One of the big demographics buying the product in New York were yummy mummies.

[Note: I think this is what she said. I’ve never heard that term before, but, upon reflection, I’m guessing she was referring to YUMmies (young urban moms). I’m pretty quick, no?]

Me: Really? Why would they like it so much?

Ms. Loop: They carry around big bags and don’t like to hunt all over their bag to find their cards. They keep their phones handy.

Me: Who’da thunk? [Still holding the smartphone in the Loop case]: This case really adds a lot of bulk and weight. Must be a real deterrent to sales, no?

Ms. Loop: Just the opposite. A lot women like that because it’s easier for them to find the phone in their bags.

Me: Oh, puh-leeze. I know I look like a moron but you don’t really expect me to believe that, do you?

[Note: I didn’t actually say that. I thought it, but it didn’t come out of my mouth]

Ms. Loop: So what do you think? Want to get one?

p.s. As this was exchange was clearly work-related, I think I’m entitled to expense that night’s dinner, don’t you agree?