When you hear “hierarchy of needs,” I’d guess that you think of Maslow’s hierarchy of needs. The theory posits that humans have needs that range from physiological needs (e.g., food, water, shelter) at the bottom level of the hierarchy, to self-actualization at the top. The theory has recently been updated to reflect the new reality that wi-fi and battery life are perhaps more important than food and shelter.

The “hierarchy of needs” concept is a useful way to look at the banking industry. There is–and always has been–a hierarchy of needs. At the bottom of the hierarchy is security, in the middle is (money) movement, and at the top level, performance. 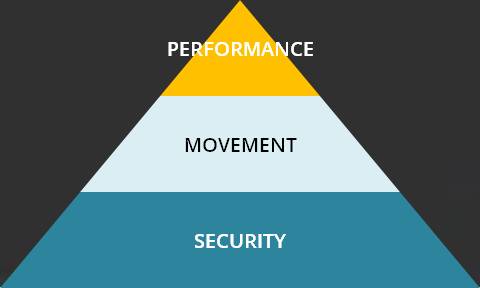 In the old world of retail banking, consumers had a need for security–they wanted to know that when they put their money in a bank of Monday, that money would be there on Tuesday. With deposit insurance, and a highly regulated industry, that level of need was satisfied, and has been for a while now.

In the old world of retail banking, consumers had a need for money movement–they wanted to know that when they wrote a check on their banking account, the money would be moved to whomever they wrote the check to. And they wanted to know that when they deposited a check into their account, that the money would be moved there (although we’ve long wished that movement happened faster than it does). These needs have been long met, as well.

And in the old world of retail banking, consumers had a need for account performance–they wanted to know that they were getting the best rates, and paying the lowest fees. This is a relatively newer level of need, as consumers (especially, and predominantly, in the US) have become more affluent over the past 50 years. The Internet has contributed strongly to helping meet this need.

Disruptophiles love to talk about how banking is being disrupted. Two speakers at this week’s SIBOS conference told the Innotribe group over and over that “you (bankers) will disrupted…it’s not a matter of if, but when.” Personally, I find these proclamations to be at a level of distraction that renders them useless. What’s happening in banking is that the hierarchy of needs–which to a large extent were satisfied in the old world of retail banking–need to be re-established.

With the advent of electronic, mobile, and alternative payments, the security of transactions and the efficient/effective movement of money is being challenged. At the top of the pyramid, the increasing complexity of managing one’s financial life makes managing performance far more complicated than just tracking rates and fees.

While the Disruptophiles would like to scare us into thinking that banks are becoming obsolete or will go out of business (i.e, become extinct) if they don’t adapt to the changes, the reality is that the financial services environment is too global, and way too complex for so-called disruptors to effect large-scale change without the assistance of, or reliance on, existing financial institutions (case in point: Apple Pay).

Bottom line: As banks and credit unions move into the latter stages of their 2015 strategic planning efforts, the challenge is not “what to do about potential disruption.” FIs needs to better understand the changing needs at the various levels of the hierarchy, and determine when and where to make investments in the technologies driving–and dealing with–those changing needs.