According to the FDIC, 7.7% of US households are unbanked and an additional 17.9% are underbanked. Forget this latter group — “underbanked” is a totally useless term.

But advocates for financial inclusion, who want policy changes (i.e., regulations) enacted to force financial institutions to bank the unbank, are missing something: Roughly half of the unbanked aren’t really un-“banked”.

Research recently conducted by Aite Group, sponsored by JPMorganChase, found that 7.2% of survey respondents said that they currently do not have a checking account. That puts the sample’s unbanked population half a percentage point from what the FDIC found.

However, roughly half of the 7.2% — 3.5% to be exact — said they have a prepaid debit card. That leaves just 3.7% of households who are truly unbanked.

Smart bankers (and consumer advocates and policy makers) should recognize four segments of consumers based on both checking account and prepaid debit card ownership: 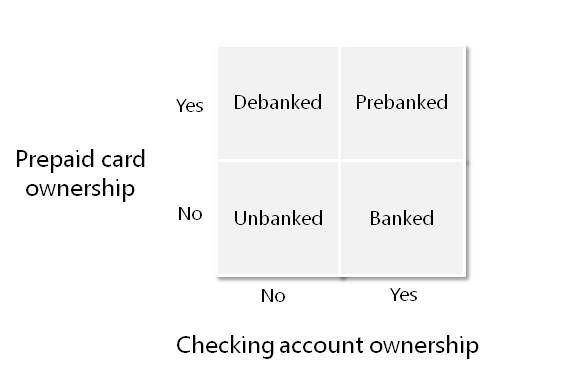 Here are some facts about each of the segments:

Banked. These consumers have a checking account, but do not have a prepaid debit card. They account for a majority of consumers, and as a result, their demographics tend towards the overall averages for the US adult population.

Prebanked. In this case, the prefix Pre doesn’t refer to “before” but to “prepaid debit card,” which they own in addition to a checking account. Demographically: 1) A larger percentage of them earn more than US$100k than among the Banked; 2) Three-quarters are Gen X or Gen Yers (in contrast to about half of the Banked); 3) Nearly six in 10 are employed full-time (higher than the percentage of the Banked); and 4) They’re more likely than members of the Banked segment to say that, since 2010: a) they’re saving more money, b) their credit score has improved; and c) their overall financial health has improved.

Debanked. These folks don’t have a checking account, but do have a prepaid debit card, which technically, qualifies them as being unbanked as defined by the FDIC. But don’t cry for them, Argentina. A third of them say that their financial life has improved since 2010 (compared to 25% of the Banked). Half of them had a checking account five years ago. The top two reasons why they don’t have one today: 1) They prefer to use a prepaid debit card, and 2) They don’t want to pay a bank’s monthly fees. One in five among this group has a credit card, nearly half has a government payroll card, and almost three-quarters have a PayPal account. Excluded from the financial system? HARDLY.

Unbanked. This is the group to be concerned about. Just one in five is employed full-time, down from more than a third that were employed full-time in 2010. Just 10% said their financial health improved over the past three years, while four in 10 say it’s declined. Just 18% have a college degree, compared to almost half of the Banked segment.

First, a mindset change regarding prepaid debit cards is needed.

The data doesn’t support this image.

The Debanked use the product as a way to avoid having a checking account. Willingly avoid.

Second, a mindset change regarding the “unbanked” is also needed.

Not all consumers who don’t have a checking account are “excluded” from the financial system. The financial “system” has changed, people.