If my basement (where I work) ever floods (again), the three things I’m grabbing are my iPad, my iPod (with the hundreds of Grateful Dead shows I have on it), and my GonzoBanker mug.

No matter. Love my GonzoBanker mug, love the GonzoBanker site, and have the utmost respect for the Gonzos from Cornerstone.

It was kind of CUES to let me sit in on a webinar the Gonzos presented the other day. Cornerstone has developed what they call a Payments Scorecard to help banks and credit unions understand how well they’re doing to generate payments-related revenue (call/DM/email them directly to find out more).

But a discussion of what merchants are doing also caught me ear. Apparently, merchants:

The Gonzos also presented research, however, which showed that, in order to get consumers to make mobile payments, merchants will need to offer some kind of incentive (i.e., discount).

In addition, merchants will pay a transaction fee to FIS for processing transactions and some amount of money to Gemalto for the development of the mobile wallet/payment app.

The boys from Cornerstone didn’t mention another factor, however: To drive awareness and adoption of a mobile payments apps, merchants will need to run some kind of advertising campaign. (If you build it, they will come? I think not).

I may be missing something here, but when I do the math, merchants could cut the transaction costs by a little more than half, or end up paying nearly seven times more than they do today: 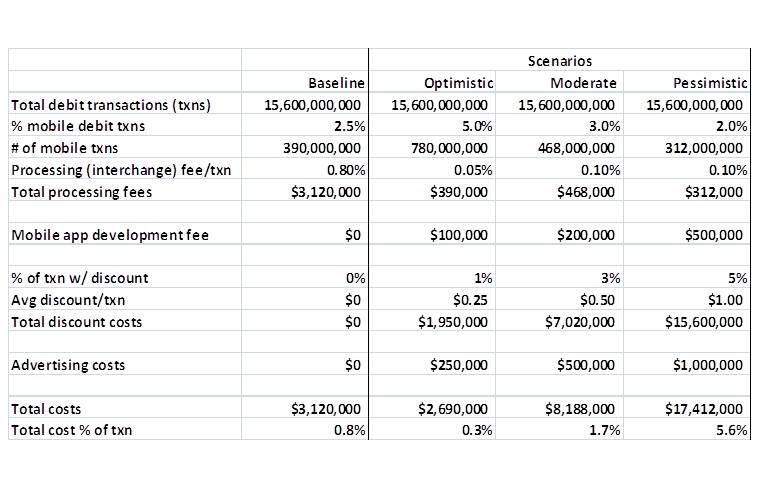 Merchants will have to launch an advertising campaign to make consumers aware of this, and get them to download and use the app. That’s got to cost at least $250k, and my high estimate of $500k is probably too low.

The key variable here are the discounts. If merchants can drive adoption of their mobile wallet without a big incentive, then the move pays off. If larger discounts are required, the business case goes down the tank.

I’m not optimistic that the move will pay off for merchants for a number of reasons:

1) Current interest in mobile wallets among consumers is low (mostly due to the fact that few people have any clue what a “mobile wallet” really is),

3) Consortia are tough to pull off. Too many conflicting interests. There’s one player, in particular, in the mix who tends to not play well in the multi-merchant sandbox.

DISCLAIMER: Please note that the numbers in the figure above are all swags (except for the total number of debit transactions, which comes from the FDIC). It doesn’t reflect any research I’ve done. I’m simply trying to put some numbers down to figure out if this thing is going to pay off or not. I’ll gladly update/change the numbers in the spreadsheet if you have anything more concrete.