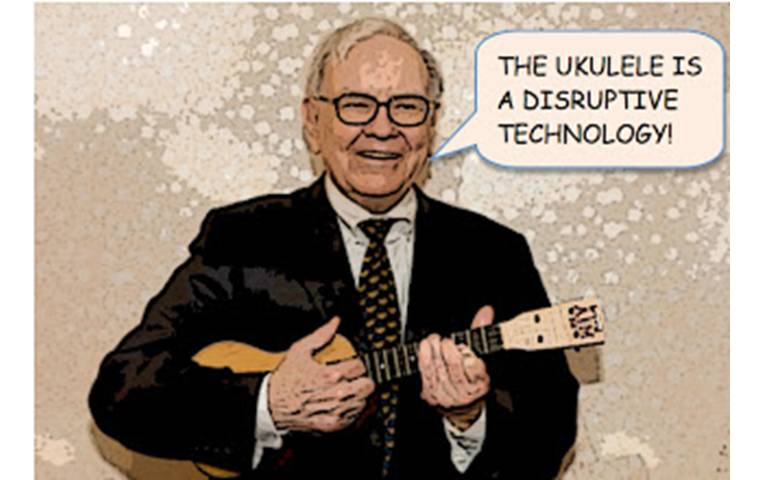 If I had a nickel for every time the word “disruption” was mentioned in a blog post, article, or conference in the past 12 months, I’d be richer than Warren Buffett.

If I had a nickel for every time the word “disruption” was appropriately used, I wouldn’t even be able to afford the ukulele that Buffett’s playing.

The most recent flagrant misuse of the term comes from the Harvard Business Review blog, which is ironic, since HBS professor Clayton Christensen is credited with popularizing the term in the first place. If a Fellow at the Forum for Growth and Innovation at Harvard Business School can’t use the term correctly, then I guess that I shouldn’t expect the rest of us intellectual lowlifes to figure how to apply it appropriately.

In an article title Revenge of the HourlyNerds, the HBS fellow(ette) writes:

“Last week’s news that Mark Cuban put $450K into consulting startup HourlyNerd should make traditional consultants nervous. Founded only last year by a team of current MBA students, HourlyNerd is a prime example of disruption in consulting. HourlyNerd represents one of the newest business models in consulting, the facilitated network business, which is structured to enable the exchange of services between clients and freelance consultants. These businesses have powerful disruptive potential because they can provide consulting at a fraction of the cost of traditional models, largely because they do not need to carry expensive fixed costs like recruiting, training, consultant beach time, and expensive real estate. HourlyNerd, by encouraging students to bid against each other, likely drives down the hourly cost of projects even more.”

My take: Last week’s news has me laughing, not nervous. Coming into a market simply with lower prices doesn’t make you disruptive.

Wikipedia’s definition (which I think it Christensen’s) of “disruptive innovation” is:

“An innovation that helps create a new market and value network, and eventually goes on to disrupt an existing market and value network (over a few years or decades), displacing an earlier technology. The term is used in business and technology literature to describe innovations that improve a product or service in ways that the market does not expect, typically first by designing for a different set of consumers in a new market and later by lowering prices in the existing market.”

In this context, HourlyNerds is hardly disruptive. No new market is being created here. Nowhere is there any proof that HourlyNerds will improve the quality of consulting. There’s no evidence that HourlyNerds is even changing how the consulting service is delivered. The only new technology involved here is the one used to connect small biz owners and the Junior Scout consultants.

There’s an axiom in the consulting industry:”You get what you pay for.” Can’t wait to see what $10 gets a bunch of small business owners.

Which brings us to the world of financial services (how, exactly, it does that I’m not sure).

There’s apparently no shortage of startups in the financial services space claiming to be disruptive (I know some of them personally, so apologies in advance to any friends — or soon-to-be former friends — that I offend here).

Most of them aren’t disruptive in the least. Instead, they’re niche fillers. They’re filling gaps, or niches, in the current market by serving unmet needs.

As Wikipedia describes it:

This is analogous to the situation in banking today.

Startups are finding cracks in the market serving people who don’t want to pay checking account fees, or who simply don’t like banks and want to find an alternative.

But these startups aren’t disruptive. They’re not creating a “new market” — they’re simply meeting the unmet needs of the existing market.

And they won’t be anywhere close to being disruptive until they develop some kind of technology that is adopted by other providers of financial services. In other words, just gaining market share in an existing market doesn’t qualify a technology development as disruptive. Ford may have been the first to mass-produce cars, but mass-produced cars only became a disruptive technology because other manufacturers learned adopted it as well.

Are there any disruptive innovations out there when it comes to financial services? The only thing I see that comes even close as a candidate to being disruptive is Bitcoin.