I was at the Association of Financial Technology conference this week, where I got to present some research and ideas about the future of retail banking. The key message I tried to leave attendees with (who were predominantly employees of financial technology vendors) was that the changes coming down the pike in the financial services industry will create new opportunities for fin tech vendors. I told them: “It’s a good time to be you.”

Who was I kidding? It sucks to be a fin tech vendor. Always has, always will.

Really now, is there any industry more organizationally dysfunctional than financial services?

Selling technology into even a mid-sized financial institution means dealing with the CIO organization, the line of business, the CFO organization, compliance, and risk.

Everybody in a bank has their own budget to spend on technology, and if they don’t have a budget, they try to spend to someone else’s budget on a technology they need.

Oh, and good luck trying to calculate a cost/benefit or ROI on your technology. I’ll never forget what Pat Swannick, who used to run the online channel group at Key Bank once told me:

“Ron, if every technology initiative we’ve got going on in this bank actually improved customer retention to the extent that the project sponsor said it would, we’d be at 700% retention by the end of the year.”

Estimates of the impact of technology on expenses are no more realistic.

A panelist in one the conference’s sessions mentioned an article he had seen about how a very large bank is not charging for remote deposit capture services because the service will reduce branch interactions which average $2.80 per transaction.  Fin tech vendors salivate over information like this, because they can say:

“Our technology can be deployed for $0,04 per transaction, so if you can migrate 1 million transactions from the old channel to the new technology, you can save $2.76 million!”

Let me give you a lesson in accounting:

If your bank’s branch does 1 million transactions in January, and you calculate (through your primitive little accounting methods) that the total allocated costs of operating the branch was $2.8 million, your average cost per transaction is $2.80, and your total cost is $2.8 million.

If you deploy remote deposit capture at the beginning of February, and reduce branch transactions by 50%, or 500k transactions in February, what are the average and total branch costs for February?

The answer: The total cost was $2.8 million and the average cost per transaction was $5.60. Branch costs aren’t variable. The same people go to work in the branch each day, and the branch is open the same amount of hours and days. You didn’t save diddly squat unless you closed the branch and fired the people.

This doesn’t sway fin tech vendors from claiming huge cost savings from the deployment of their technology, of course.

But seriously, I really do believe there are opportunities for fin tech vendors coming down the line.

Of all the challenges facing retail banking, one stands out: The need to generate additional revenue.

And with the technology and generational changes that are occurring, the opportunity to generate revenue by providing technology-based services should be at the top of any bank’s list of potential revenue-generating services.

Selling in their technology to capitalize on this opportunity won’t be easy for a lot of fin tech vendors, however.

First off, many are not very good at calculating the potential revenue gains from charging for a technology-based service (not that the banks themselves are, for that matter).

Second — and I think most importantly — is that there is a new selling dynamic emerging.

Fin tech vendors have learned from 30 (or so) years of experience how to sell into the CIO organization and address the needs and concerns of the CFO.

But there’s a new constituent getting involved in a lot of technology decisions, especially those decisions involving customer-facing technology: the CMO. 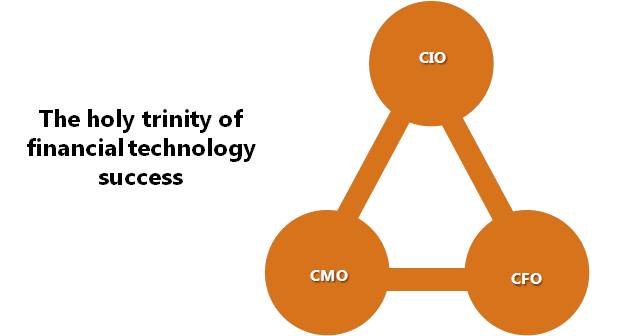 The CMO is a relatively new buyer, and new influencer, of fin tech decisions. With different motivations and metrics for making technology decisions.

The CIO and CFO are still involved in these decisions, making the sales process even harder.

And in many banks, alignment between CIO, CFO, and CMO is not where it should be.

The fin tech vendors who succeed will be those that navigate this trinity and help achieve alignment. And not necessarily those who have the best technology.

Another session panelist — the SVP of Digital Channel Management in a bank — mentioned how one vendor came into his office touting the superiority of the vendor’s integration capabilities, assuring the bank exec that integration would “never be a problem.” That vendor didn’t get very far.

Joking aside, it is a good time to be a fin tech vendor. Just not the one mentioned in the paragraph above.