A report published by Filene Research contained the following passage:

I don’t doubt for a second that the desire to “serve the underserved” is a driving motivation of many credit union professionals, and I wouldn’t for a second try to argue that it wasn’t a worthwhile, and honorable, objective.

But I would doubt, and I would argue, whether or not it describes the future of credit unions. Credit unions may have grown by serving underserved working Americans, but that doesn’t mean that: 1) The members credit unions serve today are “underserved” Americans, or 2) CU’s future growth potential lies with serving the underserved.

[Note: For the purpose of this discussion, when I refer to “CU members,” I’m referring to respondents who indicated a CU was their primary FI. I realize that this doesn’t reflect all CU members. The same construct goes for “Large bank customers” and “Community bank customers” — they’re not all customers of those types of FI, but consumers who consider that FI type their primary FI]

Comparing the demographics of the three segments reveals that:

Also consider this: When asked how well their primary FI helps them perform a range of financial management activities, survey responses were as follows: 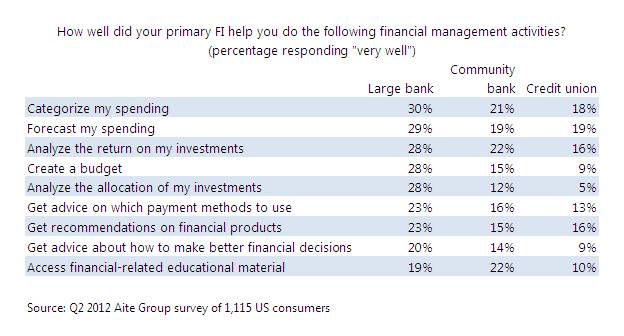 The cumbaya notion that CUs provide some sort of safety net to hordes of hard-working, down-trodden US consumers who have been taken advantage of by big bad evil large banks doesn’t hold water. CUs don’t serve any more of the underserved than other types of FIs. And, according to the consumers surveyed, CUs aren’t necessarily doing a better job of serving those members that are being served.

The key to the mindshift that needs to occur among creditunionistas is hinted at by the first line in the Filene report cited above: “Americans’ rising prosperity….” As Americans’ prosperity has risen, the number of truly underserved Americans has declined.

Consumer advocate groups and special interest groups will always point to the 8% of US households that don’t have a checking or savings account as evidence that big banks are taking advantage of people. And there will always be stories about someone who has a horror customer service story to tell about a big bank. But given the number of consumers served by the large banks, there is little evidence that the incidence rate of these horror stories is any larger among large banks than among community banks or credit unions.

Credit unions that cling to the romanticized view of “serving the underserved” will find it difficult to prosper themselves.