Ever notice how happy a pig in shit is? That’s probably how that saying came about. Well, give me survey data, and I’m happier than a pig in shit.

And I’m really happy right now, because the results of a survey of 1,115 US consumers, conducted by Aite Group and BancVue, is sitting on my PC providing me with hours of analytical fun. In the next few weeks, we will be publishing a report on PFM (which you might be able to get from BancVue if you’re really nice to them).

With permission from BancVue, I wanted to share a couple of data points (which have nothing to do with PFM, so I’m not giving away the PFM punchline here).

My take: Both banks and credit unions should take note of these data points as I believe they’re cause for concern on the part of both types of financial institutions.

We asked consumers to assume that they were in the market for a new financial product, and that the providers they were considering offered similar rates, fees, terms, etc. We then asked them if they would prefer a large bank, a community bank or credit union, or if they had no preference.

Below are the results by the respondents’ generation affiliation: 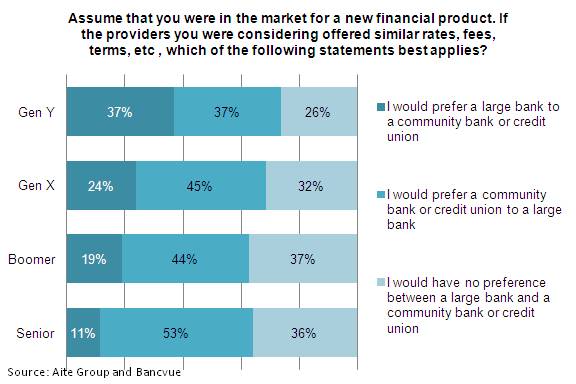 Credit unions should not be happy to see this. Gen Yers — the generation that practically all CUs are dying to court in order to lower the average age of their member base — are just as likely to consider a credit union or community bank as they are a large bank.

Who’s the most likely to prefer a CU or community bank? Seniors, who, it would seem, are discarded and ignored by so many industry observers as not being profitable or providing the engine for growth.

Bottom line: Credit unions should stop patting themselves on the back every time a survey comes out showing that consumers trust credit unions more than large banks.

I don’t want to downplay the importance of trust in developing customer relationships, but the data shown above (as well as other data points that will be published later) point to two concerns CUs should be worried about:

1. Preference. More than half of Seniors would prefer a CU or community bank, but just over a third of Gen Yers express the same preference. Not a good metric for CUs.

2. Conversion. Nearly half of Gen Xers — who, while not a particularly large generation in overall numbers, are critical because many are in the peak of their financial service need years — said they’d prefer a community bank or credit union. But do 45% of Gen Xers who open up a new financial account or apply for a new financial product do so with a community bank or CU? I don’t think so. Conclusion: CUs have a conversion problem.

This is what CUs should be worried about. Not their trust numbers.