IBM published an interesting study titled From Social Media To Social CRM. Lots of interesting data points in the report, but the one that stood out for me was the graphic that IBM labeled the Perception Gap: 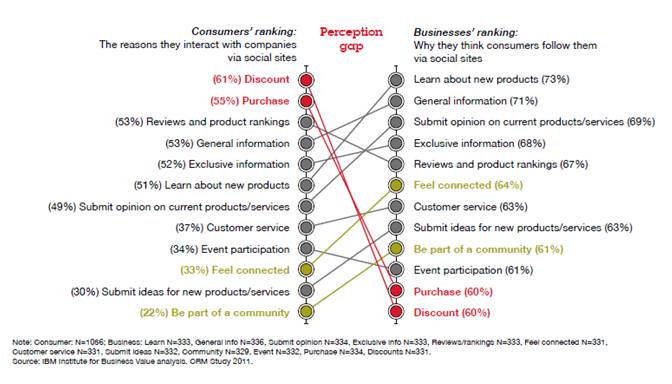 There are a number of things to take away from this chart, but the two most important are:

IBM calls this a perception gap. I call it delusion.

In a study titled Why Do People Use Social Media? Empirical Findings and a New Theoretical Framework for Social Media Goal Pursuit, Donna Hoffman and Thomas Novak from the University of California, Riverside identified seven “goal factors” including:

What IBM’s study shows is that– as it applies to consumer-to-business social media behavior — consumers are not looking to satisfy all of the needs identified in the Hoffman/Novak study. In a previous blog post on Facebook design, I suggested that understanding these goals should drive firms’ social media site design. What I didn’t know at the time was the relative importance of each goal in a consumer-to-business connection scenario.

As for social media metrics, some social media gurus advise firms to not measure the ROI of their social media efforts and to look at alternative metrics. In 5 Ways to Measure Social Media Success on the Business2Community site, one blog post advances the notion:

“You can’t measure the ROI of social media! [Executives] expect social media to be as measurable as traditional marketing techniques, but you simply can’t use the same metrics in this situation. You have to let go of the idea that you can measure dollar for dollar the return you get. People read tweets, but they don’t always go out and buy. Sometimes it’s about brand awareness, and after reading 20 tweets and seeing a company’s logo on their friends’ Facebook pages, they’ll visit the website and buy.”

This is flat-out wrong for a couple of reasons. First off, a consumer can’t follow a brand on social media that she isn’t already aware of. So there goes the “awareness” rationale.

Second — and more importantly — is the reason why the “you can’t measure the ROI” argument is wrong. If the majority of consumers who follow brands on social media do so for discounts and to purchase (per the IBM study), then sales, or revenue, is a perfectly valid measure of social media success.

There is another reason why ROI is a good metric (and why these social media gurus need to shut the hell up). It has to do with efficiency, not effectiveness.

[The problem with my example — which I’m well aware of, thank you — is that even though social media may be a lower cost channel, if marketing’s budget goes up, the efficiency effect is more difficult to measure.]

What’s really screwy about the current marketing environment is that, on one hand, social media proponents argue that traditional channels are dead and social media channels are more effective for driving engagement and community (which presumably lead to stronger relationships as measured by retention and sales), but that, on the other hand, you can’t measure the ROI of social media.

They can’t have it both ways. You can — and should — measure the ROI of social media.