In the history of Saturday Night Live, there might not be anything funnier than Eddie Murphy doing Buckwheat Sings:

Based on a (unrepresentative) survey of bank execs, it appears that banks, too, are wookin’ pa nub in all the wrong places.

The 300 or so attendees of Bank Director’s Acquire or Be Acquired conference were surveyed about a number of things, including this: 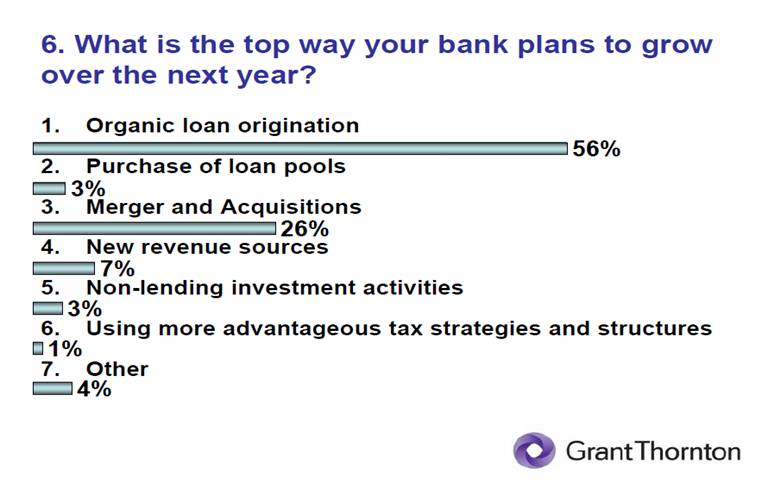 More than half of the respondents expect to grow through organic loan origination, while just 7% plan to grow through new revenue sources. (And you wonder why there are no banks in the list of top innovators).

I’m discounting the “mergers and acquisitions” answer since this was a conference about acquisitions, and the attendee pool was probably skewed towards those banks with a hankering for acquisitions.

The 56% planning to grow through loan volume are wookin’ pa nub, however. Look at these quotes from conference attendees:

“I don’t see any reason to be optimistic on the horizon. It’s a struggle to keep loan volume up there.” — Bank CEO

“Housing prices in [my] area have dipped about 10-15% since the recession and loan demand is still low. There was too much excess and too much bubble. Everyone has to deleverage, the government and the private sector.” – Bank CEO

There’s some serious short-sightedness here. Over the past few months, my colleagues and I have written about a number of revenue-generating opportunities for banks (and credit unions):

Sadly, a number of bank (and credit union) execs I’ve talked to about these opportunities choose to see only the risks and downsides associated with them.

Granted, reaping the revenue from these new opportunities is no slam dunk. But putting your faith in organic loan origination…well, that’s just being una panoonah banka. More seriously, it’s a telling insight into the innovativeness (or lack thereof) within the industry.

Does this just reflect the views of an unrepresentative set of banks predisposed to growing by acquisition?

There’s good evidence that it doesn’t. In a study done by The Financial Brand and Jim Marous, loan growth was listed as the top marketing priority by one-third of banks, and 60% of credit unions. Check out the data and the blog post on Bank Marketing Strategy.

[Thanks to BankDirector.com and Grant Thornton for publishing the survey results]