As I look back on nearly 30 years of being in the working world, two observations dominate my thought process:

The first observation reflects an issue I should take up with my shrink. (Or my dope dealer, cuz’ he helps take care of a LOT of issues).

The second observation I’m going to deal with here.

Over the past ~30 years, I’ve seen five management fads:

1. Client/server. The advent of PCs in the early to mid 80s led to the client/server fad (a term that Forrester claims to have coined) that proclaimed that PCs were taking over the world, and would lead to the decentralization and democratization of businesses everywhere.

2. Reengineering. The reengineering boom came in the early 90s as firms woke up to the realization that the business functions they were organized in performed business processes that cut across those functions. By redesigning those processes — reengineering them, that is — they would achieve step function improvements in efficiency and effectiveness that would drive profitability to astronomical levels.

3. Knowledge management. The late 90s brought on the knowledge management craze as companies became concerned that their “organizational knowledge” was walking out the door each night at 5pm each night, and could get hit by a truck walking across the street. It was the only period in the history of mankind where companies cared whether employees lived or died.

4. Digital business. The early part of this century brought with it the rise of the digital business as everything companies did would be done over the Internet alleviating the need for physical presence like stores, bank branches, etc.

Which brings us to the fifth, and current management fad of my long, not-so-illustrious career:

The most annoying thing about each of the fads that have proceeded the current one is that, for some inexplicable reason, business people can’t seem to do anything that isn’t related to the current fad. 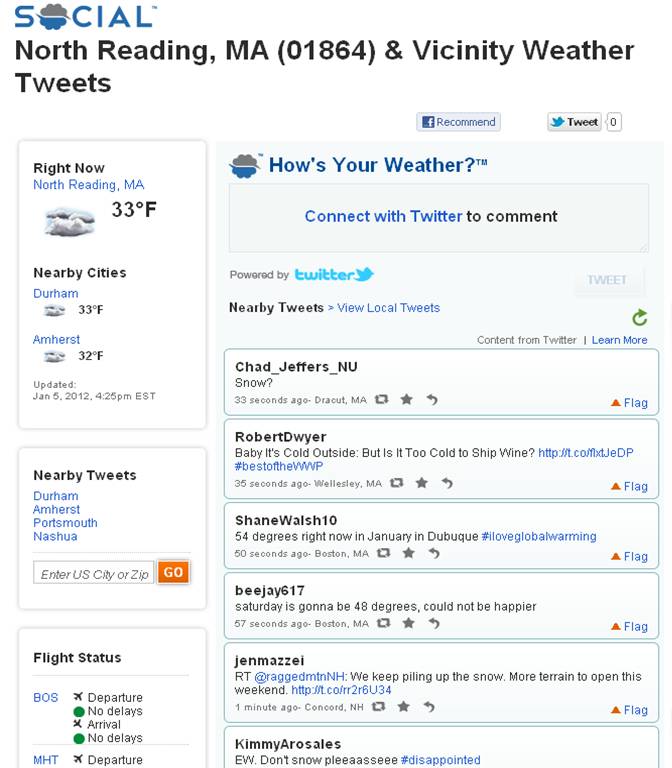 There’s simply no reason why Weather.com needs this feature. It’s not even really being “social” — the page simply picks up weather-related tweets from people who are supposedly in my geographic region. I say “supposedly” because one of the tweets listed above talks about the weather in Dubuque. Where the hell is Dubuque? Iowa? I’m in the Boston area, for chrissakes.

From a business perspective, I don’t get this, either. Is Weather.com driving deeper engagement with the site enabling it to sell more advertising space? Seems like a stretch to me.

While the innovation junkies and gurus yell and scream that we need more innovation! to improve the economy and restore profitability to businesses, it’s stuff like the above from Weather.com that companies are coming up with.

The current social media mania fad has produced a behavior commonly found in past fads: The relabeling of existing tools and technologies under the banner of the current fad.

When I started at Forrester Research in 1997, the first report I did was on knowledge management. It was truly a piece of shit report. What I couldn’t fathom, while doing the research for that report, was why every technology project that companies were proposing to do were labeled “knowledge management” projects.

Well, I understand why now. It’s how you get your project funded.

The relabeling of technologies is prevalent today, as well. Take a look at this comment from a Forbes blog (which references an outstanding report from Aite Group that…hey!…that I wrote!):

“Also interestingly, of all of the social media sites followed by Aite Group, only LinkedIn increased its overall use between 2009 and 2011. LinkedIn does not, however, address the client servicing side of the social media question. What about e-mail marketing systems such as Constant Contact? To me, this is one of the easiest and most efficient ways to enter the social media game, and it allows you to not only provide clients with information, but also in a branded way!”

There’s no doubt in my mind that we are smack in the middle — the high point (or low point, depending on your perspective) — of the social media fad.

If past business history is any guide — that the half-life of a management fad is 3-4 years — then we have another year, or maybe two, of dealing with this hysteria.

But what worries me is that the past may be not be a good predictor in this case. Here’s why: This is the first management fad that has transcended the business world to the consumer world.

Consumers, for the most part, were oblivious to the previous management fads. Oh sure, they might have experienced changes in the customer experience resulting from initiatives spawned by the fad, but they weren’t really conscious of the management fad itself.

Not so this time around.

Consumers and businesses are partners in driving this new fad.

This fad could go on for 10 years.

I hope my shrink and dope dealer are ready to help me through it.