Someone I follow on Twitter tweeted a link to a blog post titled “How to explain the social media ecosystem to your boss with 7 compelling charts”.  Go read the article, just be sure to come back.

My take: Six of the seven were interesting, but not necessarily compelling. And I wouldn’t recommend that you use any of them to try to explain social media to your boss.

The seven charts don’t even provide a compelling case for why the boss should care about social media. I hope you’ll forgive me for regurgitating some of what I’ve already blogged about, but you know what they say — some repetition is good, right?

I would strongly encourage you to focus on the former, and not the latter. Why? You’ll find it easier to get agreement from the folks in the room on what the problems are (they might not agree on the priority of those problems, but that’s OK). Untapped opportunities are generally harder to pin down, and subject to more disagreement. You don’t want disagreements in this area in the meeting.

2. Balance the dollars and sense. The quantitative/ qualitative mix in your presentation is a fine line. The presentation can’t just be a litany of statistics on social media use and trends. Talk about your customers, your prospects, and your competitors. Use internal statistics—metrics that help establish that there’s a problem to be solved. (Be careful, though—if your stats are all focused on the quality problems that manufacturing is experiencing, and the head of manufacturing is in the room, then don’t send me your resume when you’re out on the streets).

You do need to talk dollars (but not necessarily ROI). The boss wants to know what this is going to cost. The return on that investment does not have to be out to two decimal places, nor—I would argue—does it even have to be quantified at all. If the rationale for why you’re proposing to make this level of investment is sound—i.e., it solves problems and/or capitalizes on untapped opportunities—the C-suite will get it intuitively. They won’t need to know that you’ve calculated it out to be a 1,200% return, because, quite frankly, they won’t believe it.

3. Give examples. The more relevant they are to your business — like what your competitors are doing — the better. A litany of statistics isn’t as emotionally engaging as real-life examples.  Pick these examples carefully, though. Don’t give the boss fodder for shooting down your argument by refuting the validity of your examples.

4. Propose a test. Let’s say you showed the boss the seven charts from the article. Then what? Does the boss have any better idea how your company should be using social media, or what it should do next? No. Be specific. Propose an experiment or a test.

Remember how I said that six of the seven were interesting? Here’s the seventh, which needs to be called out for its foolishness: 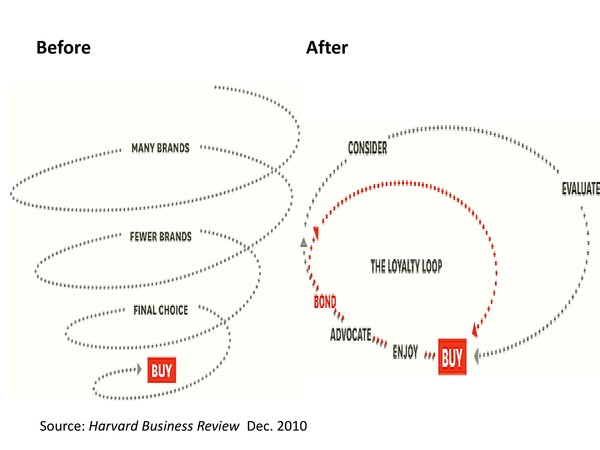 This chart comes from a Harvard Business Review article titled Branding in the Digital Age which defined what the author called the new “consumer decision journey” (there is a PDF available, but I’m not going to give it any credence with a link).

There is absolutely no evidence that the “Before” picture accurately describes how consumers made buying decisions. Think about your own decision making process. Was every trip to the supermarket a greenfield decision process? Or did you go to the store with a list, and a pretty good idea of what you were going to buy, and which brand you were going to purchase? And didn’t you respond to a special promotion, or an end aisle display, or — something — that got you to buy or try a new brand?

Of course you did.

You didn’t really go through a “winnowing” process did you?

The consumer decision-making process hasn’t changed from a cone (or a straight line) to a loop. Or to anything. I’ts always been complicated and hard to describe. No one has ever done a particularly good job of defining it. (Although, there have been plenty of consultants who have done a good job of oversimplifying it).

What has changed is this: There are many more points of influence.

Consumers have forever turned to other people — and sources — for reviews and input to help them make their buying decisions. And there have forever (forever being at least the past 50 years) been promotions and other inputs that influence what we buy when we buy.

What’s different is that thanks to technology — social media being just one small part of it —  there has been a proliferation in these points of influence. And the timing with which we can access these sources is real-time, 24/7.

What we have here is just another example of yet another consulting firm who has to claim that social media (or fill-in-the-blank with the latest management fad) has fundamentally changed everything in the world.

Do yourselves a favor: Don’t show this chart to the boss.