While attending a conference last week, I witnessed a number of speakers commit the same errors when presenting numbers and statistics.

Overall, 47.5% of speakers committed these errors on 62.3% of their slides, and as a result, 78.3% of participants completely lost track of what the speakers were trying to say.

What’s easier to comprehend? The second paragraph above or this:

Nearly half of speakers committed these errors on two-thirds of their slides, and as a result, the vast majority of participants lost track of what the speakers were trying to say.

I don’t know if presenters think it adds to the scientific accuracy of what they’re presenting, but from an audience perspective, decimals are hard to process. When you’re presenting, you want to make it as easy as possible for people to grok what you’re saying. Lose the decimal places.

One of the speakers at the conference was reporting on the results of an annual consumer research study her firm had done, and was comparing this year’s results to last year’s. She frequently referred to the percentage increases in individual statistics. This is misleading and wrong.

To illustrate this mistake, take a look at the table below. I borrowed it from NetBanker, and it shows the results of an ABA survey that Jim Bruene and I have both blogged about (fyi, I told Jim I was going to call him out on something, and have already apologized to him. I’m just too lazy to go find another example of this). 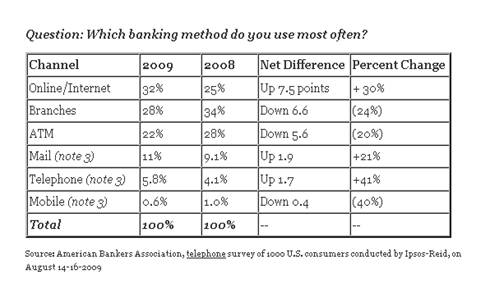 What’s wrong with the table? Technically, nothing. But it’s misleading — you can’t compare percentage changes across responses that don’t have the same starting base.

That preference for telephone is up 41% — nearly double the percentage increase of mail at 21% — is meaningless. Despite it’s “huge” growth, preference for the phone is still only roughly half of that of mail’s. If the two channels had started off at the same point, then comparing percent change would be relevant.

At the conference, the speaker went back and forth from citing the response statistic (out to one decimal place, no less) to citing the percentage change statistic. After a couple of numbers, nobody could keep track. The result: Whatever impact or impression she wanted to leave was negated.