I promised myself that I would lay low on anti-Net Promoter Score posts. But promises are made to be broken, right?

A recent Forrester report titled Demystifying The WOM Consumer (pw req’d) is to blame for my broken promise. According to a survey it did of 5,000 US households, Forrester found that nearly half of all consumers (46% to be precise) don’t give advice about products to their friends and family. 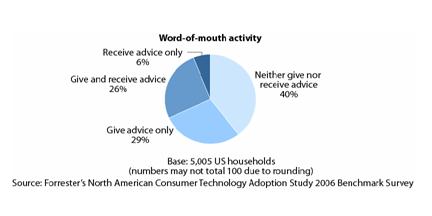 So let’s put this statistic in some perspective. According to Net Promoter (the “Official Net Promoter Web Site”), Saturn, for example, has a Net Promoter score of 74%. This means that, at a minimum, 74% of its customers are Promoters (if not a single customer was a Detractor).

But if nearly half of all consumers don’t give product advice, then how could Saturn (not to mention other firms) have that many consumers who are highly likely to recommend those firms to their friends and colleagues?

Unfortunately, that explanation holds no water. According to Forrester’s analysis, the demographics of WOM customers (those who do provide advice) are nearly identical to those who don’t provide advice.

2) Forrester’s respondents are lying. A distinct possibility for sure. But it’s highly unlikely that that many respondents would lie about something like this. The real number may a couple of percentage points lower — but could be higher, as well.

3) People apply their own interpretation to the Net Promoter question. I’m a Forrester client, and a fairly avid reader of the research. The online version of the research asks “how likely is it that you would recommend this document to a colleague”? In the year and a half that I’ve been a client, I have never recommended a document to a colleague. But I’ve rated plenty of documents a 10. Why? Because it’s the only way for me to express my opinion. Forrester doesn’t ask me if I like the document, or if I’m happy or satisfied with it — which is what I’d rather be telling them about.

And so when Net Promoter Syndrome sufferers ask their one question — would you recommend us? — it’s possible that respondents are rating the firm a 9 or 10, not because they would recommend the firm, but simply because they’re looking to express their — gasp — satisfaction with the firm.

And not only is this possible, but my bet is that it’s likely.