In an American Banker article titled Focus on Your Bank’s Brand, Not the Industry’s, the author writes:

“I believe the banking industry and their customers can restore trust. Not easily and not quickly. But, with a consistent commitment to authenticity and integrity across all outreach, trust and loyalty can be reintroduced at the heart of the banking industry.Advertising and public relations alone do not convey trust. They are simply communications channels that offer insights into the beliefs and values of the institution. Individual institutions cannot instill faith, trust, confidence, love and security into the industry brand, but they can inspire the same feelings towards their company, specifically.”

But for bank executives who would like to differentiate their bank’s brand by exceeding the industry average in consumer trust, I’d like to offer my advice on how to do it. It involves a two-step process.

Before I tell you how to do it, keep in mind that branding consultants normally charge six figures for this advice. But because I’m such a nice guy, I’ll tell you how to do it for free. All I ask in return is that you click on the Twitter button at the bottom of this post.

Ready? The two-step process for differentiating your bank’s brand on consumer trust, in two easy steps:

Here’s why this is true: Bank industry trust levels is a fictitious, meaningless statistic, created by opponents of the industry and the clueless media (e.g., Joe Nocera from the New York Times).

A few years ago, Aite Group asked consumers about their trust in financial services providers (as well as other business, religious,  and medical entities that they do business with). Although the numbers may have changed over the past few years, I’m confident that the relationship I’m about to describe still holds true.

We asked consumers about the extent to which they trusted banks, in general. Twenty-three percent said they trusted them “somewhat” and 2% said “very much.”

But then we asked survey respondents “To what extent do you trust your primary bank?”

I regret asking the question about banks in general. It produced nothing but fodder for people who want to bash banks.

It was a stupid question, one that nobody is qualified to answer.

When asked how trustworthy banks in general are, on what basis of experience or perspective could they possibly answer? Certainly not personal experience. It’s highly unlikely that any one has had experience with more than seven or eight banks throughout their lifetime.

So people parrot what they hear or read in the press. News that “consumers find banks trustworthy” isn’t going to sell as many newspapers or magazines, or drive as much TV or web site viewership, as “consumers hate banks and think they can’t be trusted” will.

For sure, some banks do some pretty crappy things from time to time. Bu those stories about how some big, evil bank wrongly evicted some single mother of five children are about as frequent as some guy jumping out of a hot air balloon and falling 700 miles per hour towards earth.

Perhaps you’re thinking that people’s trust opinions are shaped by word-of-mouth (not that anyone would ever embellish a story to make it sound better, would they?).

I’m not so sure. Research that I’ve done suggests otherwise. The problem with the research I’ve done, however, is that it would suggest that people’s trust in banks in general should be a lot higher than it is.

The more highly consumers ratetheir primary bank on an attribute,the more likely they are to ascribethat attribute to banks in general. 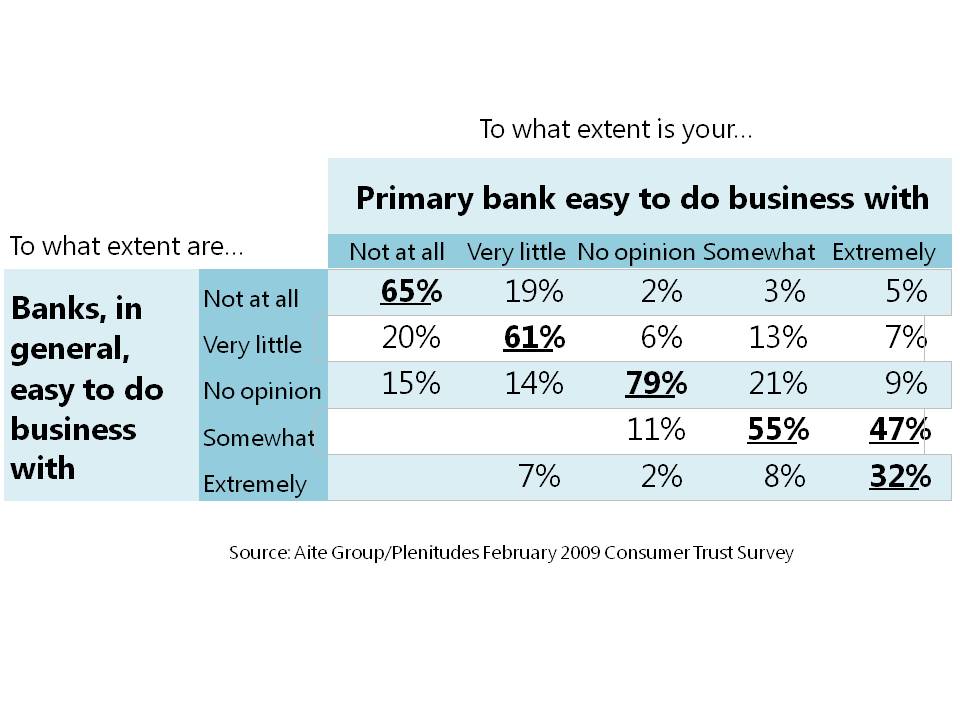 Want more proof? Sure, no problem. The following chart shows the same pattern regarding friendly and helpful service reps. 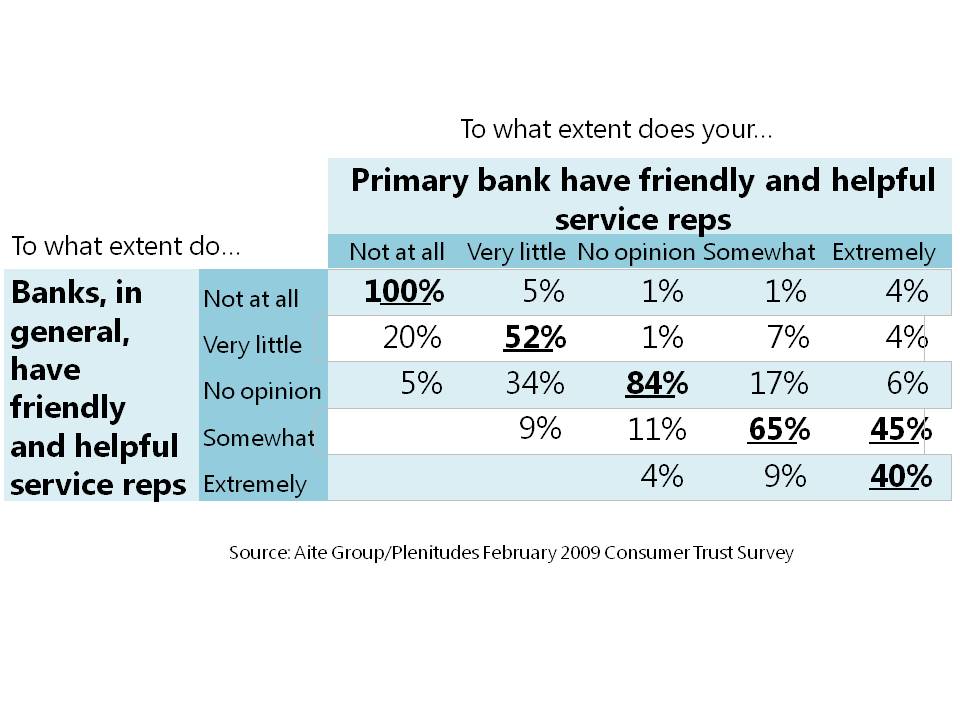 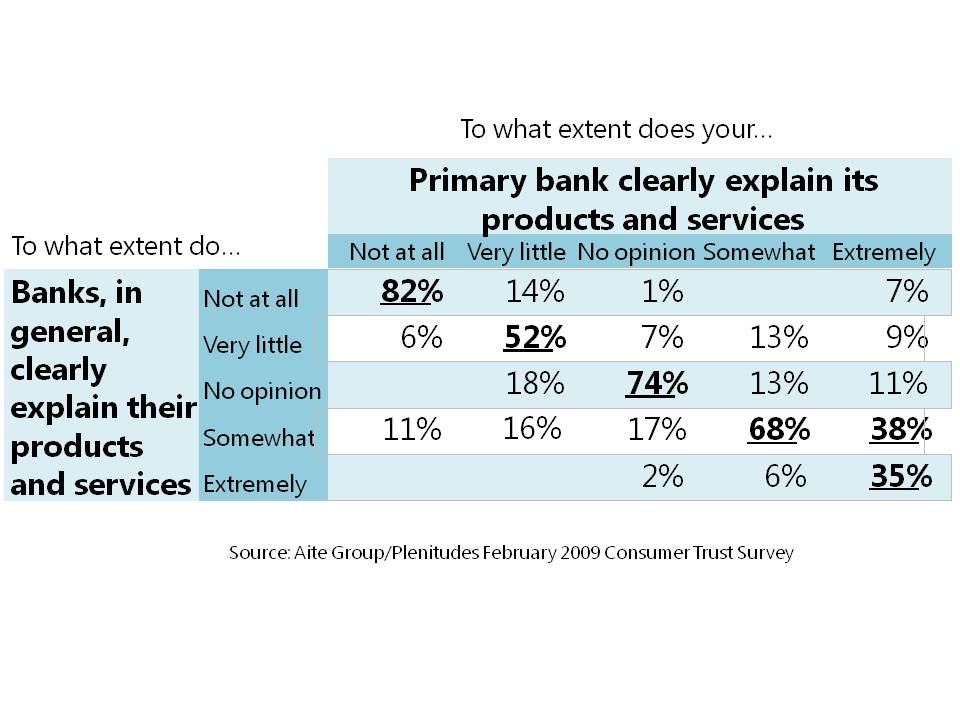 So how do we account for the low trust numbers if more than half of consumers have at least some trust in their primary bank?

We can’t. Those trust numbers are meaningless.

Pay no attention to the bank basher (trying to look intelligent by holding his reading glasses in his hand) citing those numbers. When bank bashers like Joe Nocera writes in the New York Times that the reason why people hate banks is because of credit card collection policies, they’ve got it wrong. Too few people experience abusive credit card collection policies to drive a majority opinion.

No, the reason people hate banks, and why they give them low ratings on trust, is that we’re always looking for a scapegoat, somebody to blame, for the things that go wrong. This time around, banks are the foil.

So when someone writes “focus on your bank’s brand, not the industry’s”, listen to them — it’s good advice.