Findings from a national retail banking study found that despite growth in digital banking, most Americans still regularly visit their primary banks to interact with tellers and advisors, and also frequently contact their banks’ call centers.

According to a study by Market Force Information, online and mobile banking is unlikely to displace traditional retail branch banking anytime soon. Consistent with other recent studies by McKinsey and others, the research found that consumers continue to visit their primary banks regularly and still utilize their banks’ call centers despite increasingly using online and mobile banking.

Just because consumers use multiple channels does not mean they are happy. Market Force found that one in five consumers are dissatisfied with their current financial provider and that less than 50% of consumers would recommend their current provider to a friend or colleague. The study also found that Chase and U.S. Bank are the favorite national banks, and that PayPal is currently the most popular digital wallet provider.

Despite the rise in popularity of online and e-banking, consumers continue to value the face-to-face transactions and interactions at a physical bank branch. The study found that 72% of retail bank customers had conducted a transaction with a teller in the previous 90 days – 21% walked into a bank to consult with an advisor, and 27% contacted their bank’s call center.

An identical study conducted by Market Force in the UK found that much fewer – just 57% – had made a teller transaction, while just slightly fewer had consulted with an advisor (18%) and contacted a call center (25%). 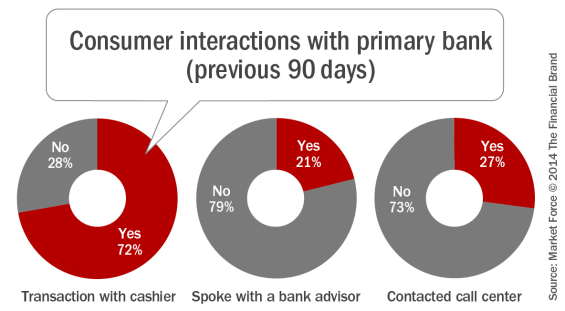 Market Force also uncovered a discernible link between consulting with an advisor and customer satisfaction. Of those who spoke with an advisor in the previous 90 days, 57% were likely to recommend their bank to others, compared with just 47% of those who did not speak with an advisor. This finding validates the move by some banks that are reallocating the space in existing branches, providing more space for platform personnel and less for teller transactions.

“Our research underscores how critical the advisor role is in retail banking – not just because banks need to sell their product portfolio, but also because it’s an opportunity for them to gain a competitive advantage in customer loyalty,” said Cheryl Flink, Chief Strategy Officer for Market Force. “We found that 17% of those who consulted with an advisor had a less than great experience, which tells me that many banks could be doing a better job of focusing on consumers’ financial well-being with superior advisory services.”

As part of the evaluation of banking interactions, Market Force looked at which national banks stand out as consumers’ favorites. Out of the five most frequented national banks, Chase and U.S. Bank ranked first and second, followed by PNC Bank, Wells Fargo and Bank of America. For the rankings, Market Force asked participants to rate their satisfaction with their primary bank and their likelihood to refer that bank to others. The results were averaged to attain a Composite Loyalty Score. 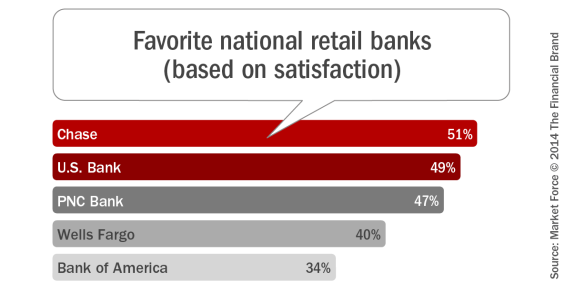 According to the study, Chase and U.S. Bank scored first and second in nearly all of the attributes that matter most to their customers, including financial stability, ease of doing business and transparency. PNC Bank, Wells Fargo and Bank of America ranked third, fourth and fifth, respectively, in these categories.

The importance of moving consumers to mobile channels is well documented. In addition to providing the potential for an improved real-time customer experience, a digital banking customer can also result in an overall reduced cost to serve. In the Market Force research, 80% of consumers said their primary bank offers a mobile banking app and, of those, 65% said they have downloaded it.

Interestingly, this is slightly higher than the UK where just 63% report having downloaded their bank’s mobile app. Three in five found their mobile banking app easy to use. 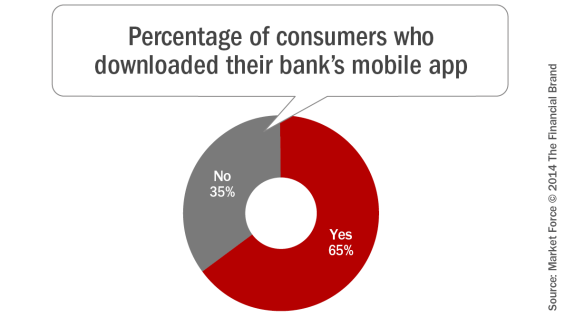 Not unlike many research studies in the past, the primary ways consumers in the United States were found to be using their bank’s mobile app were to check balances, check statements, transfer funds, deposit funds, use the quick-check balance feature, pay bills and find an ATM or branch. Also consistent with other research, very few consumers use the mobile banking app to pay others or to establish direct debits. It is a different story in the UK, where larger percentages use their mobile apps for these two purposes, and much fewer use the app to deposit funds or find ATMs or branches. 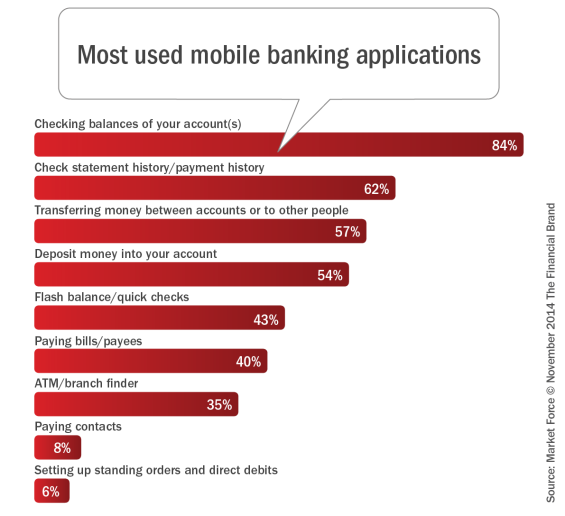 In the United States, 46% of those who have not downloaded their bank’s mobile app said they do not see the benefits of using their phone for banking, with 36% being concerned about the security of their information and 10% questioning ease-of-use. These figures were similar in the UK.

Despite all of the media attention on doing payment transactions using a phone, Market Force found the adoption of mobile wallets (prior to ApplePay’s launch) still fairly low, with only 7% reporting that they use digital wallets – with 45% of those being female and 55% being male. Penetration is highest among the 25–44 year-old demographic, but not by much. In fact, Market Force found that 20% of those using digital wallets are between 45–54 years old, and 22% are over 55 years old.

When viewed from an income demographic perspective, the highest use was in the $25,000 – $49,000 income range (24% of users), with usage dropping as income increased. 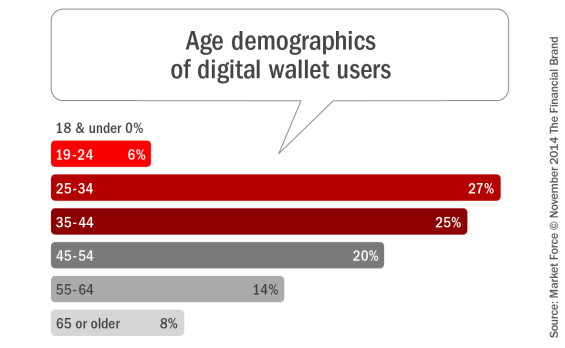 Other prevailing reasons given were that they provided no benefit beyond current payment channels (27%), concerns about security (22%) and concerns about personal data (20%). Difficulty was cited by only 2% of those polled. Interestingly, 88% of households who didn’t already have a digital wallet showed no interest in investigating or using a mobile wallet in the next six months.

At the time of the study, PayPal was clearly the most popular digital wallet provider. It claimed 60% of market share, with Google Wallet earning 43%, Apple Passbook with 17% and City Wallet by Citibank with 2%. 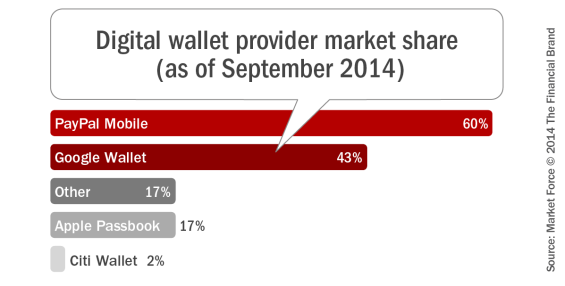 Overall, the Market Force research reinforces other studies that show that as important as mobile and online banking are, and despite a lot of noise regarding mobile wallets, consumer habits are slow to change. People continue to visit traditional branches for a variety of reasons, with the impact of these visits on overall satisfaction being significant. This is especially true with visits to advisors, where consumers usually go to for problem resolution and to open new accounts.

While the use of digital banking continues to increase, it is clear that consumers continue to use mobile banking apps for basic transactions, such as checking balances and transferring funds between accounts. It is important for banks and credit unions to continue an education process to move consumers up the learning curve, enabling them to make payments and conduct more complex transactions.

Finally, making payments using a mobile device continues to be an unusual occurrence for most households for a variety of reasons (not the least of which is the lack of merchants accepting mobile payments). With the introduction and support of Apple Pay by the largest financial institutions, mobile payments will definitely increase. The real questions is … how fast.

The online survey by Market Force was conducted in September 2014 across the United States. The pool of 3,733 respondents represented a cross-section of the four U.S. census regions, and reflected a broad spectrum of income levels, with 46% reporting household incomes between $25,000 and $75,000 a year. Respondents’ ages ranged from 19 to over 65. Approximately 58% were women and 42% were men. Three quarters were employed at least part time.