Millennials use ATMs more than older consumers, so they should be most interested in fee-free ATMs, right? Actually, that's not the case.
Subscribe Now!

In a recent survey on FindABetterBank, about 18% of respondents currently shopping for checking accounts were over 50 years old, while 42% were under 30. Most acquisition marketing efforts are geared towards Millennials (and rightly so), but older consumers looking for new checking accounts warrant some attention as well.

When comparing how people use their checking accounts by age, reveals some (unsurprising) behavioral differences. Younger consumers use ATMs at least weekly more so than those over 50. And the average low balance for shoppers over 50 is $2,300 vs. slightly more than $700 for shoppers under age 30.

But some of behavioral differences don’t jive with the features consumers say are most important when selecting a new checking account. One would think that young consumers — those who are most socially active — would be the segment most interested in surcharge-free ATM access. However, more than 37% of shoppers over 50 indicate they “must have” access to surcharge-free ATMs. Only 27% of shoppers under 30 must have this feature. 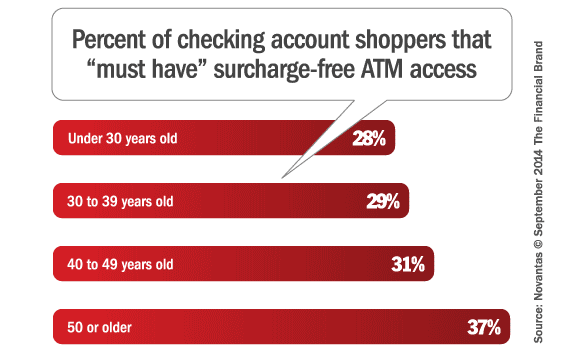