Subscribe Now Get The Financial Brand's FREE Email Newsletter
Hundreds of financial institutions drenched themselves in frigid water for the ALS Ice Bucket Challenge. Here are six PR lessons for banks and credit unions who participated... as well as those who didn't.
Subscribe to The Financial Brand via email for FREE!
Amyotrophic Lateral Sclerosis (ALS), often referred to as “Lou Gehrig’s Disease,” is a progressive neurodegenerative disease that affects nerve cells in the brain and spinal cord. The progressive degeneration of the motor neurons in ALS eventually leads to death. About 30,000 Americans currently have the disease.

If you somehow escaped the ultra-viral ALS Ice Bucket Challenge this summer, here’s the skinny: an organization or individual dares someone else to either donate $100 to the ALS cause or have ice cold water dumped on them. Participants post videos of themselves getting soaked on social media platforms like Facebook and Twitter. In the video, every participate is expected to nominate three others to take the challenge next.

Banks and credit unions were quick to jump in. Hundreds — if not thousands — of financial institutions have dumped buckets of icy water on their CEOs, executive teams, branch staff… even their board members. Just Google “ALS Ice Bucket Challenge” along with the term “credit union,” and you’ll find more than 500,000 results; there are over 10 million results for banks.

Total donations from most banks and credit unions have ranged from $100 up to $2,500. Wells Fargo ponied up $162,000 — $1,000 for every year they’ve been in business, which is believed to be the most donated by any financial institution participating in the Ice Bucket Challenge.

Wells Fargo CEO John Stumpf accepted the challenge in a well-coordinated PR event, getting a tub of icy water dumped on him as he was writing a check to the ALS Association. Webster Bank CEO Jim Smith and Hampden Bank President/CEO Glenn Welch also took the plunge. A number of JPMorgan Chase employees, including the CFO, Marianne Lake, did the challenge together outside the bank’s headquarters on Park Avenue.

The ALS Ice Bucket Challenge is being celebrated as one of the most successful charity drives in history. Within a month, the broader campaign has generated over $100 million in donations. (By comparison, it took over a year for the Livestrong yellow bracelet campaign to raise $50 million back in 2004.)

More Than Just a PR Stunt

For some financial institutions, the campaign was more personal. Former US Bank employee Debra Chaney died last November at age 43 of ALS, so the bank’s CEO Richard Davis encouraged employees at all of its branches to participate in the challenge after getting drenched himself.

Vermont FCU participated in the memory of former board vice chairman Gilbert Tabor, who passed away from ALS in 2011. Similarly, the CEO and board at Southern Mass Credit Union were doused with a bulldozer full of water in honor of CEO Daniel Waltz’s father, who died from ALS in 1988 at age 54. (Franklin Savings Bank and Maine Family FCU were among the many other financial institutions who opted to dump a bulldozer full of water on staffers.) 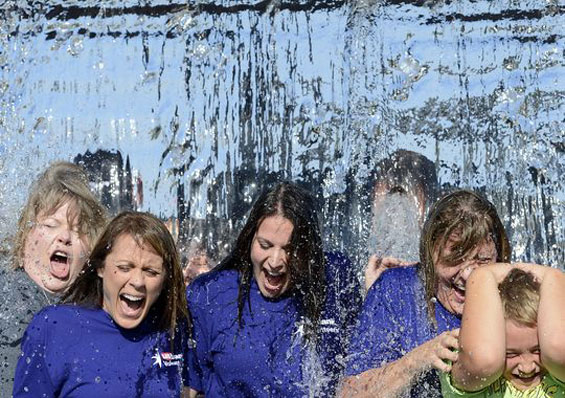 US Bank employees get soaked outside a branch in the ALS Ice Bucket Challenge.

1. Be Prepared to Pounce on PR Opportunities. Every now and then, viral memes like the Harlem Shake and ALS Challenge sweep across the internet. You need to be ready to strike when these pop culture PR opportunities present themselves.

2. Don’t Be Late to the Party. If you haven’t participated in the ALS Ice Bucket Challenge yet, it’s probably too late… at least for PR reasons (of course you can still make a donation to the cause). Most internet memes flameout as quickly as they initially erupted. Your team will have no more than a week or two to react, so they need to be nimble and willing to put in some extra hours to stay within the window of opportunity.

3. Make It Locally Relevant. If you’re a big, national financial institution, then it makes sense to donate to a large(r) charity. But most banks and credit unions serve smaller, specific, limited communities. Whenever possible, community-based institutions should look for opportunities to donate on a more local level. Similarly, if you’re going to challenge others to participate, you should pick people and organizations that your target audience relates to on a local level.

4. Get Creative. No one wants to see the same thing done the same way over and over again. It’s repetitive and boring. Thinking of new ways to execute an existing idea makes participation in pop culture fads fun for everyone — your team and the public.

5. Brand It. If you’re going to take the time and invest the energy into any public relations effort, do it right. There is no shame in branding your event. Consider using a giant backdrop with your institution’s logo — a large printed backdrop, vinyl banner or corporate sign. Employees should wear branded apparel. For the ALS Challenge, using branded buckets would have been a nice touch.

6. Be Authentic. Don’t get caught up in the sheer act of making videos. Make sure you stay focused on the substance of the charity itself. If you do a little research and spend some time investing yourself in the cause, your PR effort will feel much more authentic. In the Ice Bucket Challenge for example, it would be good to find someone in your local area with ALS and make your donation on their behalf. 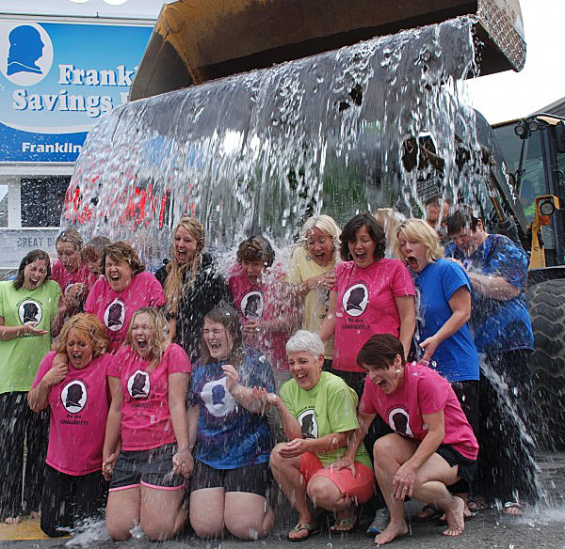 Wearing branded shirts, the staff of Franklin Savings get drenched.

Vantage Credit Union created a human waterfall for its version of the Ice Bucket Challenge. About a dozen employees formed a cascading series of bucket dumps on a flight of stairs that finished with their CEO.

After Belvoir FCU was challenged by another credit union, they decided to create a video where 1,000 $1 bills were dumped on employees rather than ice water. The money was then donated to the cause. 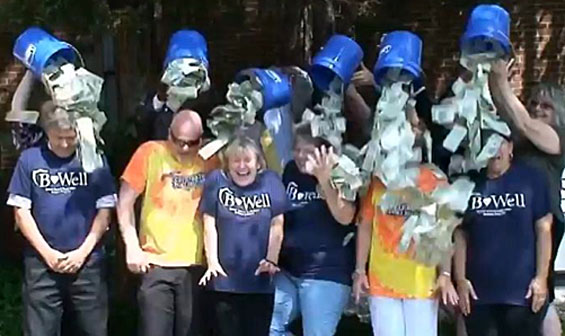 Numerica Credit Union coordinated a 45-person event outside their headquarters, believed to be the single largest group assembled in the financial industry. 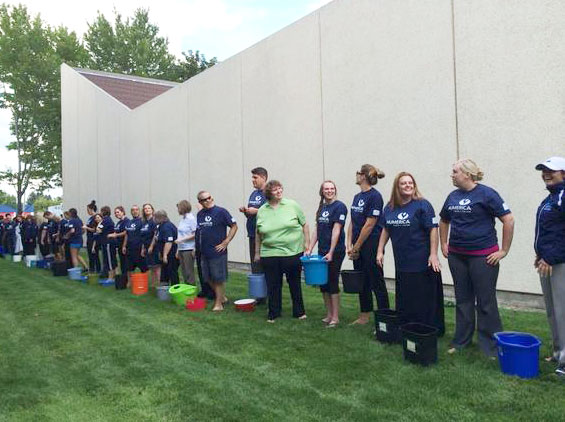 Numerica employees line up outside one of the credit union’s buildings.

Norway Savings Bank posted videos on YouTube from nine of its 16 branches. PeoplesChoice Credit Union got all four of its branches involved.

Mid-Hudson Valley FCU raised over $1,100, and pledged to donate an additional $1 for each Facebook share of its Ice Bucket Challenge video, up to $500. The video posted on Facebook drew over 1,500 views and 640 shares in under 24 hours. 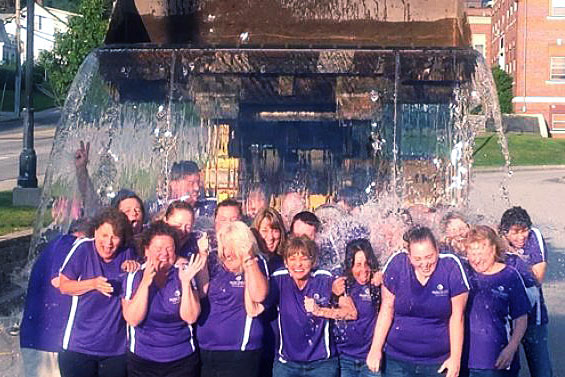 Employees of Maine Family FCU get a bulldozer full of frigid water dumped on them.

CFE Federal Credit Union made a lighthearted four-minute video using a variety of clever camera angles, including the “Bucket Cam.”

TCT Federal Credit Union CEO Curt Cecala accepted the ALS Challenge on along with members of their Milton Branch. The credit union then challenged five other local organizations.