Subscribe Now Get The Financial Brand's FREE Email Newsletter
Ohio Valley Financial Group ($250 million) and BankTrust ($130 million in assets), both based in Henderson, Kentucky, announced in early July their plans to merge. Rather than pick one of the two banks' legacy names — typical in most merger situations — the two institutions chose to develop a fresh new brand instead. Field & Main Bank will become the official name of the continuing organization early next year.

Seeking to capitalize on a merger and widen their market, executives for the two Kentucky banks set out to create a distinctive new name and brand identity that would capture the essence of their organizations’ rural roots but play well in small cities and suburbs as well.

They kept coming back to two words: “field” — which they associated with rolling acres of crops, baseball diamonds and football stadiums, nature preserves and parks, and well-tended yards — and “main,” the center of commerce in small-town America.

The word “main” also imbues a subtle echo of the message that “Wall Street, not Main Street, was the source of the financial crisis,” observes Scott Davis, Chairman/CEO of Ohio Valley Financial Group. Davis, currently president and CEO of BankTrust, will continue as chairman/CEO at the freshly minted Field & Main Bank.

The name Field & Main inspired the brand promise of “modern craft banking,” which aligns with the burgeoning craft movement of farm-to-table restaurants, farmers’ markets, craft breweries, and handmade goods. As Davis notes in a video on a website created to showcase the new brand, craftsmanship is “about creating something unique, something authentic and genuine,” just as reimagining banking as a “craft” promises a very different customer experience.

FMS President/CEO Tim Pannell says that — given the pace of change in the financial services industry — nothing will be the same five years from now. “But you can identify your organization’s overarching principles and core convictions and say, ‘In 15 years, we want to go from here to there,’ adapting to customers’ needs and technology advances along the way,” Pannell explains.

Even before the merger discussions began, removing geographic references from the bank’s name had been under consideration. “Ohio Valley” has been part of its name since the bank was formed in 1887, but while that phrase makes perfect sense to people in certain geographic markets (specifically those living along the river that forms the Kentucky’s northern border), prospective customers in the Lexington area, where the bank operates a loan production office, associate it with “the state across the river.” Clearly a geographically-limiting name incorporating the word “Ohio” wasn’t going to fly.

Executives of the merging banks were also looking for a unique name that would set their organization apart from community banks in the region as well as the big national financial brands. Toward that end, they stuck all the names and logos of competing banks on a wall as they brainstormed “to come up with a name that didn’t sound like the usual suspects of a bank name, and a word combination that provided differentiation without sounding awkward,” Davis says. “We believe Field & Main reflects the heritage behind our two banks and conveys the idea of community banking at its finest.”

And — just as critically: the name is much more easily trademarked than all the me-too monikers most financial institutions tend to prefer. (Back in 2008, Ohio Valley Financial Group — known as “Ohio Valley National Bank” for 120 years, learned a hard lesson in trademark law. You can read more about it here.)

The supporting brand promise was the brainstorm of Laurie Pannell, brand director at FMS. “Laurie felt like the words really played naturally to the strong craft movement currently running through our culture,” Tim Pannell says. “Everything we’re seeing says that people want a different experience — one that is a little more customized, more crafted and personalized, less mass-produced.”

The new brand aligns with market research from its existing customer base Ohio Valley conducted over the years, and indications suggest it should resonate with potential customers in larger communities, especially those who choose to shop at Whole Foods, farmers’ markets, and stores featuring hand-crafted goods.

“People can feel like there is a banking experience that fits into this movement, a bank that identifies with them on that level,” Pannell explains. “It has a small-town community feel, but as we move into larger metropolitan areas, it allows us to fit in there with a more boutique feel.” 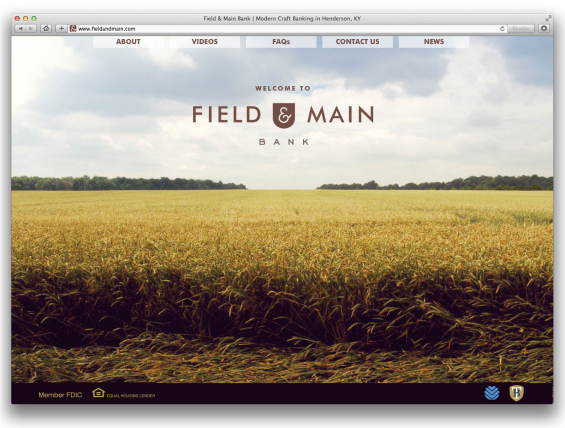 Once they settled on the new name, FMS and its two clients worked quickly to pull together supporting material to unveil the brand when the merger was announced. In just four weeks, they created two videos and the microsite (which will eventually become the bank’s main website once the merger is official), packets for employees and the press in a style that reflects the “craft” concept, along with letters to existing customers announcing the merger and new name.

Rumors often plague big, institutional events like mergers and name changes, so Pannell says it was crucial both banks be ready to respond to questions surrounding the rebranding as soon as it was announced.

“I tell my clients, ‘You only get one “get out of jail” free card when it comes to a name change — and that’s when it’s an acquisition or merger, because that’s when it makes sense to everyone,'” Pannell says. “Before you say the first word, you need to have everything in place and ready to go. If you try to play catch up with the rumors, you’ll always be behind.”

In addition to the system conversions that accompany any merger, the future Field & Main Bank also began planning how to deliver on its brand promise through its service and infrastructure. The bank is working with the design/build firm NewGround on a “retail evolution” to be staged in at its five banking locations, including three offices in Henderson, a branch across the river in Evansville, Indiana, and a BankTrust branch in Cynthiana. The new lobby design will move employees from behind the teller counter so they can interact more comfortably with customers and move more easily to guide them to the services they need and demonstrate electronic services on computers and mobile devices, Davis says.

NewGround is also working to incorporate the rebranding into the décor, Pannell adds. “They were ecstatic about the new name. The decorator sent us an email saying ‘I couldn’t stop thinking about ways to incorporate elements that communicate the concept of craftsmanship.’”

A banner ad on the two banks’ websites about the new name/brand.

The bank’s main office lobby will be transformed first and serve as a “laboratory” and training hub for the new approach to customer service. “Staff training will be a huge component of introducing this new model of interacting with our customers,” Davis notes. “We even have new positions, called ‘relationship bankers,’ who will handle account opening and other traditional interactions, but also be trained in consumer lending and be proficient in demonstrating our electronic banking offerings.”

Staff members have also been brainstorming how they can connect with the community to demonstrate “modern craft banking” in action — e.g., events showcasing craftspeople and entrepreneurs, such as how baristas brew the perfect cup of coffee.

“Serving small businesses is a key part of our business model, both for the businesses themselves and those who would be drawn to this concept of craftsmanship,” CEO Davis says. “Our aim is to connect with people in ways that show we understand their quality of life issues. Many small business people are not motivated primarily by profit, but in seeking a better quality of life. We’re offering solutions to help people to manage their busy lives.”

Reactions to the new name and brand identity thus far have been mainly positive, though there there have been conservative constituents asking, “What does that mean?”

“It’s a big deal to depart from the old brand name,” Davis explains. “But younger consumers seem more readily to get it and connect with it. We believe there will be much more acceptance as we roll it out and demonstrate modern craft banking in action.”

In the meantime, the FieldandMain.com microsite is available to answer customers’ questions about the changes underway, and a video featured on the video page introduces the new brand on an emotional level.

It’s no accident that the URL doesn’t include the word bank, Pannell notes. “We decided there’s something nice if you don’t know at first that Field & Main is a bank. The message is that banking can be a craft as well. Just as craftsmen can take tools and do something very special with them, Field & Main Bank can deliver an experience that is personalized for its customers.”