There is a widening gap between customer expectations and the delivery of social banking services according to a report from Capgemini. For the first time, this gap has negatively impacted customer experience ratings.

Bank customers reported a decline in positive banking experiences for the first time in three years, according to the recently released 2014 World Retail Banking Report from Capgemini and Efma. The growing prominence of Gen Y was an important reason behind the overall decline in customer experience ratings, underscoring the challenges banks are facing in meeting the evolving demands and high expectations of the digitally-savvy younger generation.

For instance, in North America, only 41.7 percent of those between 18 and 34 years cited positive experiences, compared to 63.4 percent of those of other ages, a difference of 21.7 percent. It was found that Gen Y customers want to conduct more of their banking through social media channels and are frustrated that most banks only allow them to do basic research via these channels.

“The decrease in the percent of customers reporting positive experiences signals an early warning alert for the industry,” said Jean Lassignardie, Chief Sales and Marketing Officer, Capgemini Financial Services Global Business Unit. “To reverse the troubling decline in positive experiences, banks need to fully understand evolving customer preferences and the expectations of ‘Gen Yers’, who are driving current and future demands in banking and its digital transformation.”

Balance Between the Physical and Digital

Increasingly, the bank of the future is shaping up to be an integrated network of distribution channels, with each channel working fluidly with the others to serve the specific needs of a diverse and changing customer base. To be prepared, the Capgemini report believes banks need to embrace some form of omnichannel delivery, presenting a clear and positive experience through all channels.

“We know that today’s end-users expect seamless interactions via multiple channels with faster, almost instantaneous responses. The findings in this year’s World Retail Banking Report demonstrate that retail banks need to be more agile, innovative, social, and mobile in order to create a more meaningful experience to engage their Generation Y customer base.” — Simon Short, Global Head of Digital, Capgemini

As the number and type of channels increase, knowledge of how customers prefer to interact with their bank is critical. Only with a full understanding of individual customer habits and preferences will banks be able to ensure a consistently positive customer experience.

The Importance of a Social Banking Strategy

“The mindset of Gen Y customer expects interactions with all organizations to be similar to what they receive from Google, Amazon, Apple and others,” said William Sullivan, Head of Global Financial Services Market Intelligence at Capgemini during an interview with Brett King on his “Breaking Banks” radio broadcast. “They don’t interact with their bank from a traditional channel perspective … but as part of an overall customer experience.”

Sullivan continued, “It’s not like the branch is not important for Gen Y, it’s just that all channels are important to this segment – with the internet, mobile and social being the most important. In the end, Gen Y wants convenience and reduced friction, allowing them to do banking as part of their everyday lives, when and where they want.”

In the research study, Moven and Simple were illustrated as examples of banks that are changing the way people bank by empowering customers with information and advice – providing an advanced user experience, simplifying payments, and focusing on the customer.

Among banking customers surveyed as part of the Capgemini report, more than 89% of the respondents said they had a social media account. As would be expected, the most active users are the younger demographic segments.

While relatively late to the social media table, a majority of banks and credit unions currently leverage social platforms, particularly Facebook and Twitter, to monitor and respond to service issues and to build brand awareness. Some of the more advanced institutions are using social media to better understand customer preferences and even sell services.

While serving as a communications channel, the Capgemini study found that social media has not yet matured into a channel for executing transactions … yet. According to the study, at least 10% of customers in some regions of the world are using social media to interact with their banks at least once a week.

The study also found that retention is likely to increase at banks that offer a strong social media experience. As shown below, the impact of social media differs by age of the customer and region of the world. 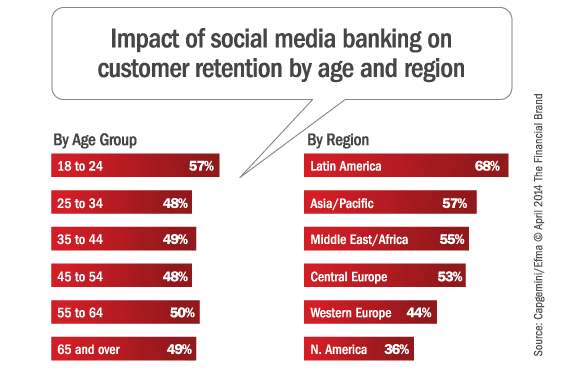 According to the Capgemini study, more than 90% of the banks surveyed provided (or plan to provide) basic information and customer service capabilities via social media. As shown below, only 32% offer some form of collaboration functionality with 51% planning to do so.

Even lower on the priority list was providing transaction or account information capabilities through social channels. In fact, more than half of the banks surveyed (58%) said they were unlikely to offer account information, citing data privacy, security, potential regulatory issues and inadequate back-end infrastructure as reasons. 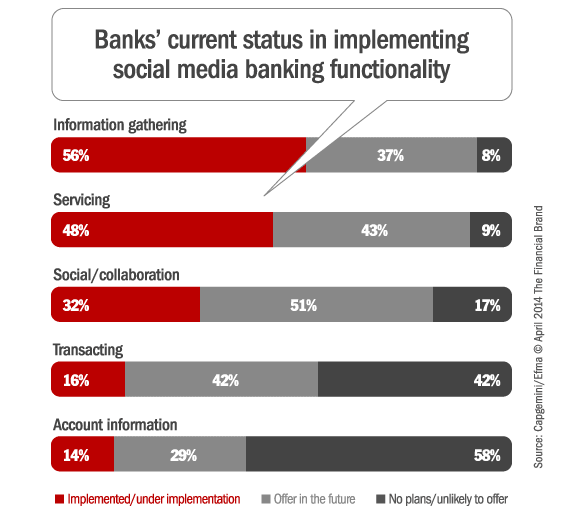 Some examples of banks that have leveraged social media in a relatively broad way according to Capgemini include:

Existing banks face technological challenges because legacy core systems have a difficult time supporting mobile and Internet banking, much less social network interactions. “There’s no question the legacy systems pose challenges in cost and execution at the larger banks in the U.S.,” Sullivan said in an interview with Forbes.

“The likelihood of a core replacement is not extremely high because of the cost and risk. So we find focus on how to work within existing system, how to manage and leverage data, and how get channels to interact seamlessly.”

The report notes that there is also a lack of clarity around the emerging social media landscape and that social media channels add another layer of complexity to an already crowded channel infrastructure. Another challenge is that there are few metrics to measure the impact of social media to a bank’s bottom line.

Some believe the biggest barrier to the advancement of social media as a banking channel is the lack of regulations governing its use. Proper disclosures, privacy issues and the risk associated with working with third parties all add to the challenges of broader social media use.

Finally, while some banks have developed a wide variety of ways to leverage the power of social media, including access to account information, payments, etc. there’s no single proven path to success with social media banking.

According to the 2014 Retail Banking Voice of the Customer survey, there are several mismatches between the social banking functionality and what customers want to do through social media.

The biggest gap is in the area of account information where, while ranking highest on the scale of customer importance, virtually no financial institution provides this functionality. Another gap was apparent with social collaboration, where customers did not find this capability as important, yet a relatively high percentage of banks provide this functionality. 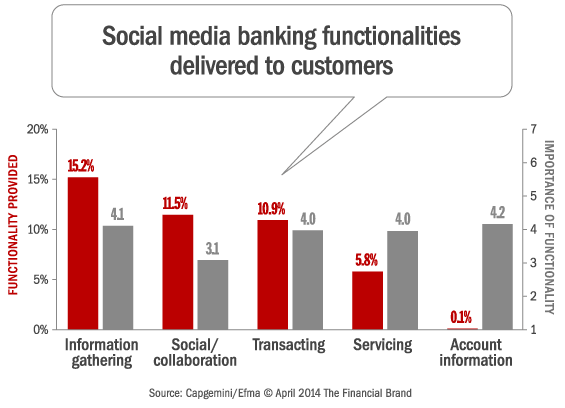 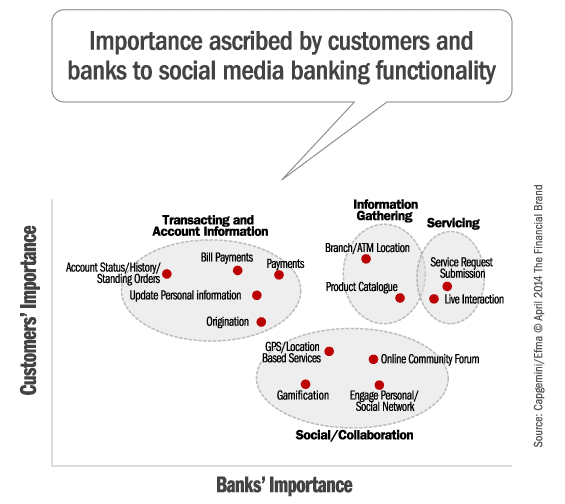 According to the report, “We anticipate social media will become a permanent part of retail banking, with growth in social media accelerating at speeds similar to those witnessed during internet and mobile banking adoption.” Therefore, bank strategy can become misaligned with customer expectations, particularly when technology is evolving so rapidly.

“Just when we thought we had internet banking and mobile banking with apps under control, now Gen Y is calling out social media to us,” said Phil Gomm, Capgemini director and banking industry Australia practice leader. “Gen Y is becoming disenfranchised because they can’t transact in the way they want and when they want.”

It is clear that banks have to work out how to make social media an effective channel, alongside the branch, telephone, internet and mobile device.

It’s all about convergence, with ‘SMAC’ being the door to the future, according to Gomm. “That refers to acknowledging that Social media is now entrenched, recognizing that the Mobile device is in our hands and always switched on, having the Analytics to interpret big data enabling sensible business decisions that become a competitive differentiator and all based on Cloud-hosted technology.”

To carry out a strategic social media strategy, Capgemini recommended that banks build a multi-layered infrastructure to include:

Read More: 12 Questions: The Role, Relevance and ROI of Social Media in Banking

With Gen Y comprising one-quarter to one-third of the population in many markets, its attitudes and preferences are highly influential. Retail banks must pay attention to the needs and expectations of Gen Yers, as their influence is only expected to grow.

While the Gen Y customer may not generate the largest amount of revenue for banks today, that dynamic will change. According to Sullivan from Capgemini, “The value and profitability you receive from Gen Y is ten years from now when you get to stay in business.”