When the marketing team at Associated Bank began started exploring new ways they could bolster the organization’s brand awareness in the marketplace, it’s unlikely any of them realized they would wind up pinning their hopes to a green chair.

Why a chair? And why green? The color is easily explained: Associated Bank’s brand is soaked in verdant green. The chair, however, is being used as a metaphor for the bank’s service philosophy.

Dawn Riedel, SVP/Director of Brand and Marketing Services, says that she and her colleagues — who were assisted by a local agencies CI Design and Versant — chose a chair because it could be shown to represent the kind of experience customers have banking with Associated.

“Like that green chair, Associated Bank is a good fit for our customers,” the bank’s marketing copy says. “With responsive service, knowledgeable advice and smart solutions that make managing your money easier — we’re here for you, whenever and wherever you need us.”

In its ad campaign, Associated has plopped green chairs into all sorts of environments, like an artist’s studio, a baseball field, a gym and a metropolitan rooftop.

“It’s all about putting this striking green object in places you wouldn’t expect to see it,” Riedel explains.

The campaign concept— which was one of about 12 ideas Associated’s creative partners came up with — is wrapped with the new tagline, “A Good Fit,” a marketing message that Riedel and her colleagues hope will resonate with consumers. 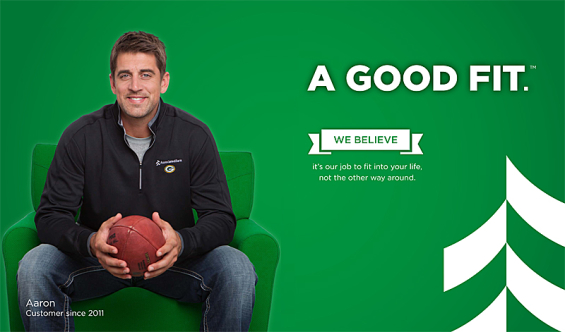 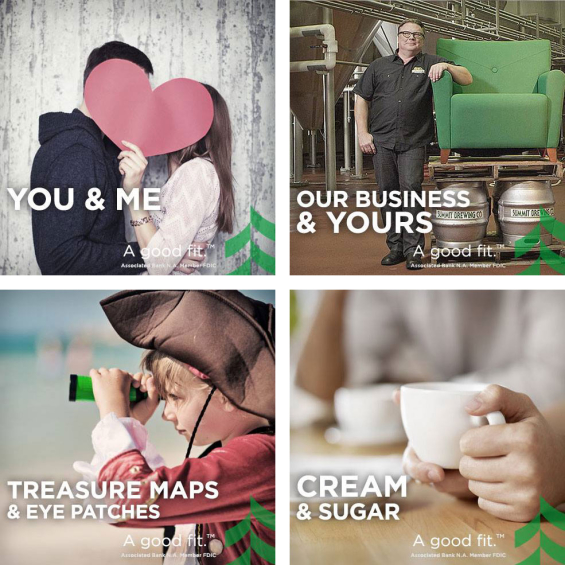 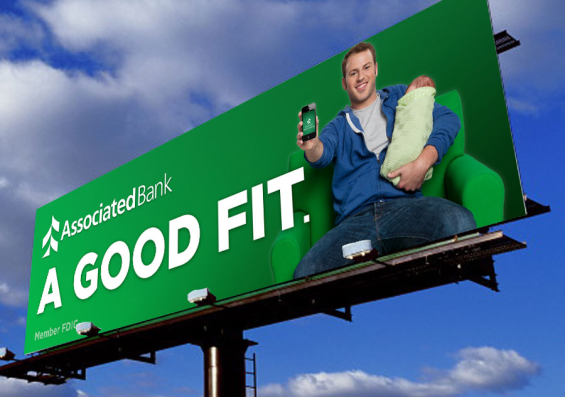 This three-and-a-half minute YouTube video walks through the development of the bank’s ‘Green Chair’ concept, including insights from Associate’s CEO. You can see three of the commercials in the campaign at the bank’s YouTube Channel: here, here and here.

Associated is tapping pretty much every media channel available to spread the “good fit” vibe.

Anchoring the campaign is a series of five TV spots, which feature real Associated Bank customers — including Green Bay Packers quarterback Aaron Rodgers — sitting on, standing around and otherwise posing with the signature green chair while spinning out lines like, “consistent,” “good people,” “no surprises,” “protecting my legacy” and “with me from the beginning.”

Associated decided to enlist actual customers for their ads because “we wanted this campaign to be about them speaking for us, rather than us speaking for them,” Riedel explains.

The spots focus on customers’ stories, allowing the bank “to extend the messages that are shared in our TV spots and also allow us to reinforce the idea that our customers are speaking for us,” as Riedel puts it.

Some of the customers also pop up in a series of radio ads and billboards the bank is running as part of the campaign.

Associated is airing the commercial in all of its major markets, spanning Wisconsin, Minnesota and Illinois.

As for the campaign’s outdoor ads, Riedel says: “We wanted it to be like someone might see their friend or neighbor up on one of those billboards.”

“We’re just getting going online,” Riedel shares, “but the intention is that it will eventually help us take the next step of telling these stories.”

The stories Riedel alludes to include a series of short videos with customers’ testimonials.

“We’ve produced about 14 of them,” says Riedel

Associated has also invested in YouTube advertising, paid search and banner ads as part of the campaign.

“We’re kind of sprinkling the stories around as time goes on.”

Although Associated is already utilizing both its Facebook and Twitter pages to “invite fans and followers to talk about things that are ‘a good fit,’” Reidel explains, the bank is still dialing up the social-media component of this campaign. She says the marketing team plans to take things “far beyond that” well into 2014.

Riedel says she considers social media’s primary role in campaigns like this one to be “to develop relationships and loyalty and increase referrals of friends and family to Associated.”

Print will eventually play role in the campaign, too.

“We didn’t start out with any print media because the message was more brand-related and we weren’t making a strong call to action,” says Riedel. “Now, though, we’re in the process of developing how we can utilize the green chair and ‘A Good Fit’ for product-specific print advertising, as well as ads for some of our other business lines.”

Although Associated only unleashed its “green chair” campaign only late last year, Riedel team already feels it’s been a success.

There are two reasons for that, she says. First, Associated’s staff as a whole — from the corner office down to the teller window — “have embraced this campaign like I’ve never seen before.” Riedel says she’s received “a lot of requests from colleagues who want miniature green chairs they can display in their offices or give as gifts to customers.”

The other reason she calls the campaign a success is more directly related to the bank’s bottom line.

“We go into our major markets and we track where we are in terms of levels of awareness, advertising recall and various other areas,” Riedel explains. Just after the green chair campaign’s initial salvo, Associated repeated the survey. “We wanted to see if we moved the needle at all in terms of general brand awareness and advertising recall. The top-line results look really positive so far.”

Riedel say the campaign is expected to run for at least 18 months, and possibly up to three years.