Mass affluent households are tricky, with unique patterns of media consumption, technology use and attitudes about financial services.

Representing a sweet spot between the mass market and affluent segment, the mass affluent segment is not homogeneous, but a diverse array of micro segments that differ from each other. To reach this group, new products and services need to be developed, new messaging needs to be used and varied channels need to be leveraged.

Three studies help to shed light on the opportunities and challenges presented by this highly sought after segment.

According to Nielsen, the mass affluent segment consists of more than 13 million households and represents approximately 11 percent of all U.S. households. The segment is defined as having income producing assets between $250,000 and $1M (excluding real estate) and an average household income of $105,000 in 2011. This income is more than 50 percent higher than the national average household income of $62,912. In depth analysis also shows a high correlation between income and assets for targeting purposes.

Well educated, this segment is primarily comprised of baby boomers who grew up in the middle class. Many are over the age of 55, married and primarily empty nesters, but the segment is far from monolithic since many are in the 45-54 age range with teenagers who have not left the nest yet. The segment as a whole tends to tune out traditional marketing strategies and, interestingly, don’t consider themselves to be ‘rich’. Instead, they like to be under-the-radar and considered savers or conservative investors. Other highlights of the mass affluent consumer from Nielsen’s research:

For the financial services industry, while the segment is rich in opportunity, it has actually shrunk over the past few years due to the economic crisis (impact on savings and investments) and because some have moved into the affluent segment. The product use of the mass affluent segment has also decreased in recent years, but is still significantly higher than the mass market. With households in this segment beginning to roll over their 401(k) funds into retirement accounts and many receiving inheritances, the opportunity is still significant. 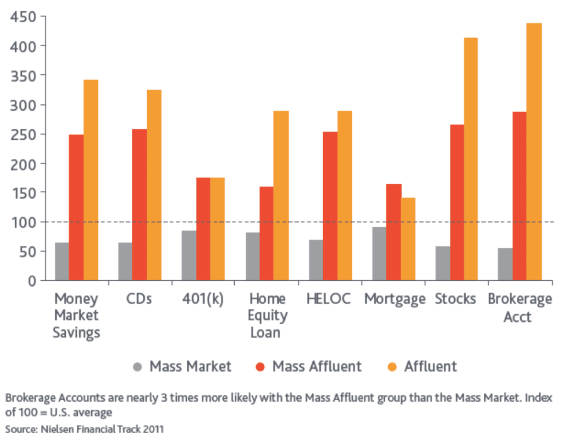 Channel use for this segment is also different than other segments, with acceptance of direct deposit being high as well as ATM and mobile access. As could be expected, the use of smartphones and tablets increases with income within the mass affluent segment.

Mass affluent households go online multiple times a day, at home and at work, averaging 23 hours a month online. They receive financial and business electronic newsletters and use online sites to track investments, pay bills and even register gift cards. While this segment embraces new technologies, they are still 8 percent less likely than the average consumer to access the internet using their mobile devices. 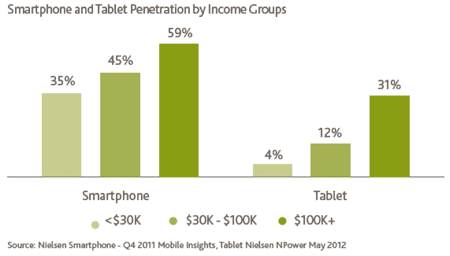 According to the Nielsen research as well as research from HNW and a report published by Aite Group and Scivantage, the primary obstacle to a deeper relationship with this segment is the perception of a ‘one size fits all’ value proposition offered by banks. They feel like they will be treated indifferently despite their balances and relationship potential, and that a bank is not the best option for investment services or financial advice. They also view their relationship with their bank as remote as opposed to being a ‘trusted advisor’. 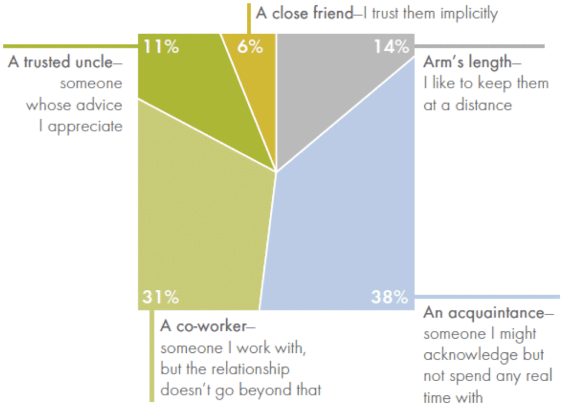 The segment wants to be recognized for their value and provided services commensurate with their worth. They don’t want to be ‘sold’ products, but provided advice that is client-centric. Waiving bank fees is definitely not enough.

Despite these seemingly negative perceptions, banks still have an opportunity in today’s market since the majority of traditional services are still maintained at a bank. In addition, while this segment does not currently use a bank for their investments, the relationships with their non-bank advisors are not as well entrenched as their more affluent counterparts. 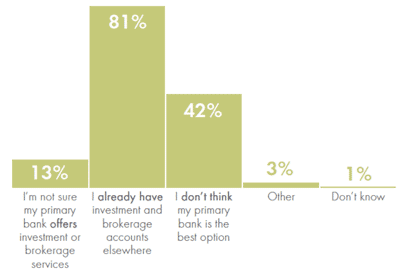 Because this segment also believes they are somewhat ignored by their current investment firms, there is still an opportunity for banks . . . and there are significantly more households in this segment than in the traditional affluent segment.

“Caught between two worlds—the middle class and wealthy—the mass affluent are looking for solutions and advice, but failing to find it from advisors within the retail banking space,” HNW’s CEO Stacey Haefele said in a statement. “Retail banks have an opportunity to tangibly demonstrate worth by getting customers to consider them for their investment needs.”

Leslie Paladin, senior vice president of HNW, asserts that banks must do a better job of communicating to their mass affluent customers about their services and advisory expertise if they want to compete with wirehouse and independent advisors. She added that banks would do well to push advisors to “work within the ecosystem of the brand.”

Beyond baby boomers, the mass affluent segment also includes a growing sub-segment of Gen-X and Gen-Y consumers that have a potential for banks. While many of these households still have not accumulated enough assets to be considered mass affluent, there are some who do meet the criteria.

“Gen-Xers and Gen-Yers have been far less loyal to their investment providers over the last few years compared to Boomer and Silent Generation investors, indicating that young consumers have yet to find their ideal investment providers,” said Sophie Schmitt, Aite Group Senior Analyst, Wealth Management. “Banks seeking to maximize their ability to retain and grow share of wallet with young investors should work on growing their online investing capabilities and providing more convenient services.”

The mass affluent is a huge opportunity for banks, but it is not a monolithic customer segment. While the asset and the income range of the mass affluent segment is similar, reaching this segment must go beyond traditional mass media. The group is made up of voracious readers of traditional print (newspapers and magazines), but their taste in reading material reflects their individualized lifestyle. The segment is not best reached through radio. And, while they are significant subscribers to cable packages, they are much less likely to watch TV (broadcast or cable) than the average U.S. household. 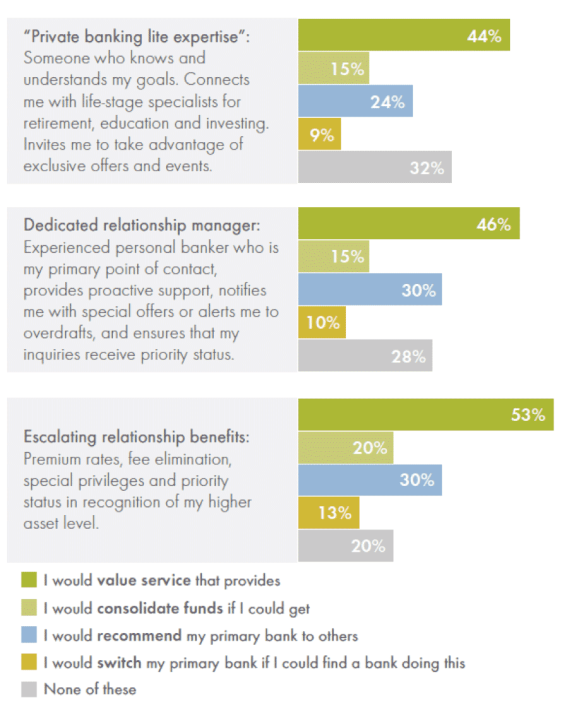 Bottom line, financial marketers will need to subsegment the mass affluent based on their demographic and behavioral differences. They will need to understand the channels each subsegment uses, the products they prefer, the media they consume and the way they want to be communicated with. Because of the diversity of this segment, targeted direct communication is the best vehicle. Both digital communication and direct mail should be used, leveraging as much internal and external data available.

The marketplace is opportune for banks to develop models to serve the mass affluent. But those firms interested will need to move quickly since competition for relationships is high and unique product and service offerings are being developed. Failure to develop a cohesive strategy will not only limit the potential for growth, but could ultimately result in the loss of relationships already in place with this segment.