PNC is experimenting with its brick-and-mortar strategy, testing different concepts in various markets to find a new solution that will meet consumers' changing needs and expectations.

It’s clear to the senior leadership at PNC Bank that the dynamics of branching are experiencing a massive tidal shift.

“The way people want to do business with us — the way they’re using our branches, especially — is changing,” says Dan Bishop, manager of one of the PNC’s newest branches in Malvern, Pennsylvania.

The Malvern concept branch eschews the traditional bastion of teller windows for a row of supercharged ATMs. PNC’s “DepositEasy” ATM allow customers to deposit multiple checks and loose bills without an envelope (receipts include scanned images of any deposited checks). Customers can also withdraw cash in denominations as small as $1 and as large as $50.

“Essentially, these ATMs can do anything a teller could do from a transactional standpoint,” Bishop explains.

“We designed this branch to break down the barrier between the teller line and the customer,” says regional manager Dawn Doherty. “Every single interaction here is shoulder to shoulder. It’s very collaborative, very relaxed.”

Most of the 11 staffers at the Malvern branch share interchangeable office space, as well as the same new title — “Financial Consultant.” All receive a level of cross-training more rigorous than traditional tellers receive.

The Malvern location also has a video room enabling customers to virtually meet with financial specialists who can dispense investment, mortgage and retirement planning advice.

“We really wanted to take a different approach with this branch,” explains PNC spokesperson Jason Beyersdorfer.

“When we looked at things like how more and more of our deposits are being made via mobile or ATM,” Beyersdorfer continues, “and how our customers are using e-banking offering more than ever, we thought to ourselves, ‘Okay, how can we take this from something that’s transactional to something that’s more conversational and relationship-based?’” 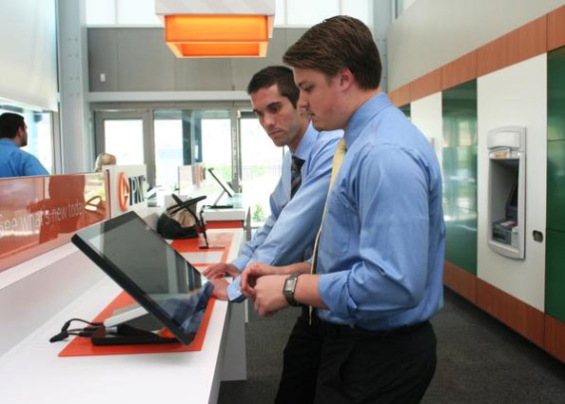 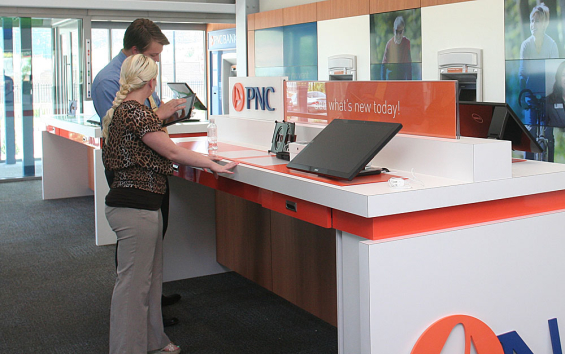 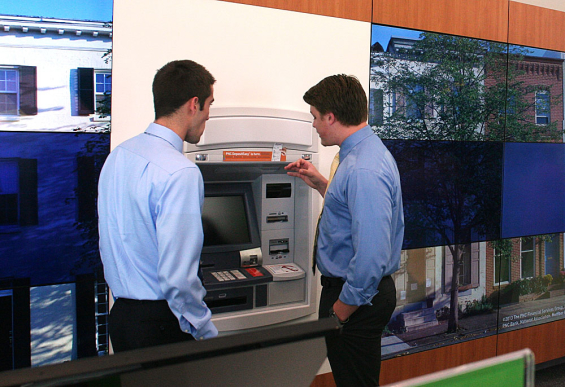 By today’s standards, PNC’s Malvern location is large — 3,600 square feet. But that doesn’t mean PNC thinks bigger is necessarily better. To help pinpoint its branching sweet spot, the bank is exploring other radical design concepts for its stores, including locations on the opposite end of the scale spectrum: micro-branches.

For instance, the “pop-up” branch PNC opened in Atlanta last year measured a Spartan 8-foot-by-20-foot. PNC is using the pop-up location to help test its new service delivery solutions — like the smart ATMs, and staffers armed with iPads. But they are also using the branch to evaluate whether a particular market needed- or could even support a more permanent banking location.

Should consumers expect to see more such PNC branches “pop up” in the future? Yes. Probably. Well, maybe… Todd Barnhart, EVP of branch banking, says that PNC is still very much “in the R&D phase” and that “there isn’t a blueprint or single answer.” Instead, it’s just “trying to react to and anticipate some of the consumer expectations and consumer trends that we’re seeing.”

“The number of customers at the teller window continues to decrease” explained David Melin, one of PNC’s regional presidents, in an interview. Melin says this is due in large part to the fact that many of them “have decided ATMs, online and mobile banking best meet their everyday banking needs.”

“Technology has made it possible to automate many functions that once could only be performed at the branch,” Melin adds.

This became a part of PNC’s calculus early last year to close about 200 of the branches within its 19-state footprint, with another 25 on the chopping block in 2014. But wider adoption of eBanking solutions was only part of the decision. The branch closings were primarily driven by an aggressive cost-cutting program that aimed to shave some $700 million in expenses from the bank’s balance sheet.

Top brass at PNC aren’t giving up on the brick-and-mortar channel. In fact, quite the contrary. The bank still maintains around 2,700 branch locations. And, and PNC’s Bishop points out: “Many of our customers still expect to have that face-to-face experience with a teller when it comes to important transactions.”

That’s why PNC is retooling the way they look at, think about, design and roll out their branches.

However it all shakes out, a few changes in PNC’s branch design are likely to become permanent. Barnhart is confident that the bulk of the branches PNC opens in the coming months and years “will be smaller, staffed differently and [feature] more technology.”

Nevertheless, PNC says it is committed to the brick-and-mortar channel because “that personal access, that face-to-face interaction is something consumers still need and want.”

In the meantime, PNC will continue to refine the unique staffing model at its Malvern and pop-up locations while trying to strike that perfect balance with tech and self-service options.