51. Make inside jokes only locals would think are funny.

The Bank of Ann Arbor ran a playful series of billboards mocking its competitors’ lack of local knowledge. The billboards feature user-submitted slogans along with the names of those selected as winners in the bank’s “Build-A-Billboard” Facebook contest. “Non-local banks think Briarwood is where Peter Rabbit lives,” read one (translation for non-locals: Briarwood is Ann Arbor’s big mall). 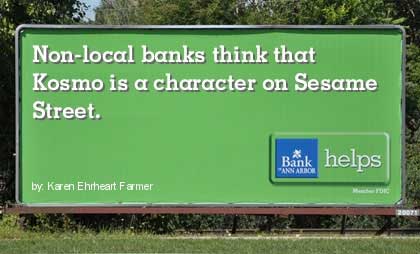 People are fascinated by money — stacks and piles of it. It’s just fun to look at. This bus shelter display is made from special 3M security glass and real coins. The headline: “Millionaires take the bus.” The copy: “Taking mass transit versus driving saves roughly $5,000 per year. If those savings are invested over a typical 45-year career, you’ll retire a million dollars wealthier.” 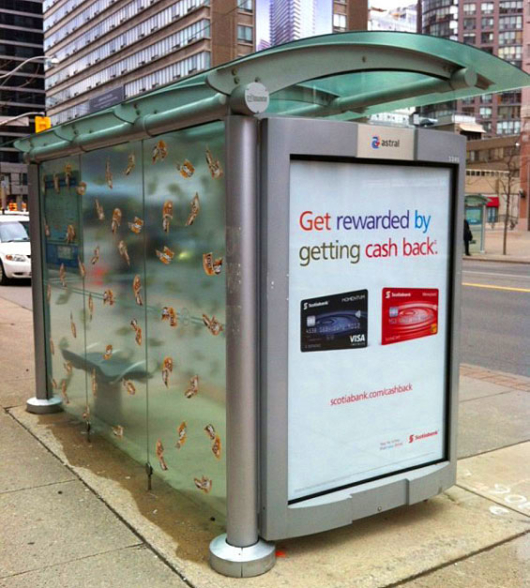 A teaser campaign is an advertising campaign which typically consists of a series of small, cryptic, challenging advertisements that anticipate a larger, full-blown campaign for a product launch or otherwise important event. In the teaser billboard below, the bank starts off with a nearly all-white billboard. “What is it?” people wonder. “Who’s it for?” Then over the course of the next few days, more and more of the billboard is shown to reveal the advertiser. 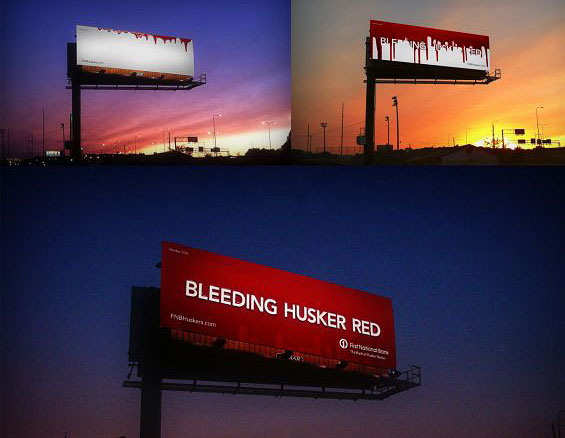 Psshhaw, you scoff? “Banks can’t make a viral video,” you say? Not true. This three-minute video from TC Bank has been viewed over 4.7 million times.

Guerilla is one of the most effective tools in the marketer’s arsenal, and yet it is nearly completely ignored by most financial institutions. There is no better way to get mountains of free PR than pulling of a good guerilla marketing stunts. Study non-traditional campaigns and turn yourself into a guerilla marketing commando. If you want to make banking fun — on a budget — the bang for the buck (i.e., ROI) on guerilla can’t be beat.

If you’re running low on ideas to make banking fun, replenish your creative juices with beer. Get everyone together on a Friday afternoon, or have an offsite overnight retreat. When you’re looking for fresh ideas, it helps to break away from your stale surroundings.

One way to make banking more fun is to eliminate headaches, hassles and roadblocks. If you’ve got a product or program you know annoys consumers, kill it. It’s only going to get in your way as you try to build a fun brand.

If you have a financial education program for kids, a mascot is a fun and engaging way to bring your message to life. You can find 25 different ideas for mascots that other banks and credit unions are already using here.

Western Sun FCU made these printed pieces — a third of a $100 bill — and left them around public places for people to find. It really doesn’t matter what they printed on the insides of this nifty little marketing trick. People probably read the entire message no matter what it said. 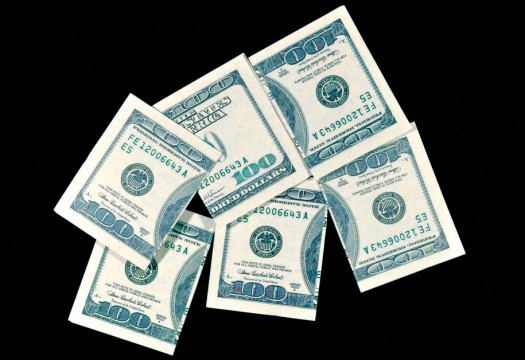 It’s not that billboards are a tremendously effective advertising medium (although they can be). It’s that billboards give financial marketers excellent opportunities to express their fun, fresh take on banking. Good outdoor advertising makes use of its environmental context. Great billboards will become local pop culture sensations. 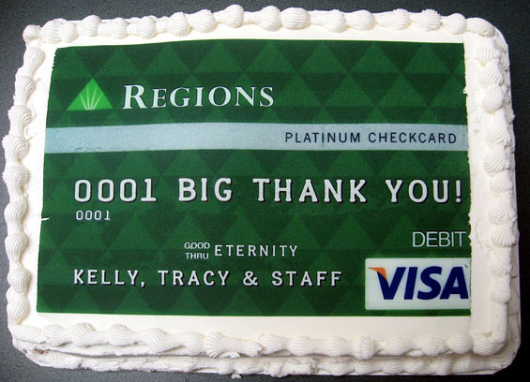 62. Have fun during Halloween.

Take a page out of First National Bank’s marketing playbook. They came up with a brilliantly simple Facebook promotion that’s a spin on the age-old guessing game made popular at county fairs in the 20th century — e.g., guess how many pennies are in this jar. They took a picture of some piles of cash, posted it on Facebook, and invited participants to guess the total sum. The closest guess won a cash prize.

Technology now exists that allows mobile users to point their smartphone at an ad and it will trigger an interactive video. Imagine how much fun it would be to bring your next ad to life — literally. Commonwealth Bank has run a mobile-driven, augmented reality advertisement in key Australian markets. The ad, placed in a number of Australian newspapers, invites readers to download the CommBank 3D reader app so they can explore Cherryford Hill, an interactive virtual town.

Some local businesses are famous for the amusing messages they rotate on their monument and pole signs. 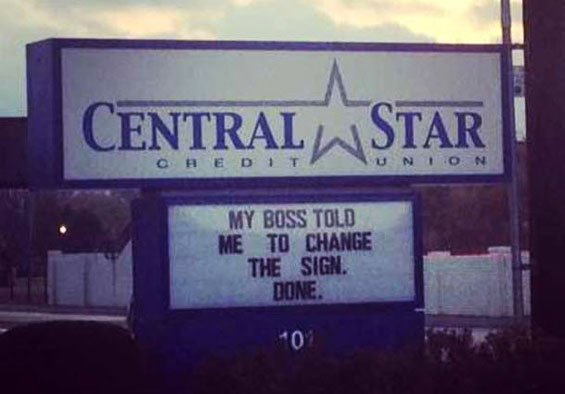 This is great for charity campaigns. One credit union held an internal contest for staff. Any employee who made a donation was entered into a drawing for various prizes, including a “Pie in the Face Contest.” Winners were allowed to throw a pie in the faces of two credit union executives. Six members of the senior team volunteered to take a pie in the face.

Sound silly? Maybe it is. But isn’t that part of having fun? A credit union in Australia hired street teams to give away hugs around Sydney when it relaunched its brand under the theme “Generous Banking.”

Dogs are fun, playful — man’s best friend. You can put water bowls out in front of your branches for your patrons’ canine companions. You can give out dog treats in your drive-through lanes. You can have a dog mascot, like Sunova Credit Union that has a St. Bernhard in every branch. You can also support local dog charities.

Cowards hide behind political correctness, while bold brands have all the fun. And Christmas is fun! Innovations FCU performed a brilliant 3-minute lip-dub performance of “Jingle Bells” — shot all in one take. Innovations posted the video posted to its YouTube channel, where it’s been viewed over 16,000 times — not shabby for a credit union with only 18,000 members and $157 million in assets.

Element FCU offers zombie debit cards, and OCBC in Singapore offers a sprawling series of wild card designs including one called “Deep In The Valley” you have to see to believe. 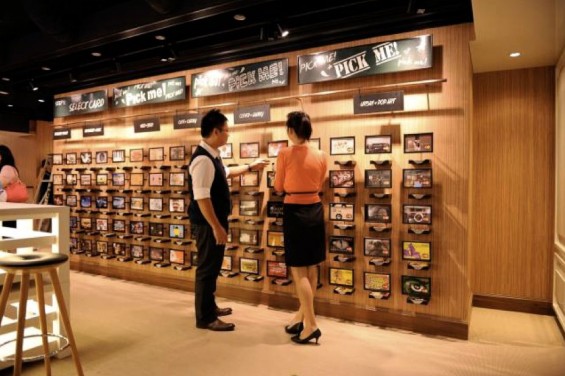 OCBC in Singapore has a large display with all their fun credit card designs that consumers can choose from. 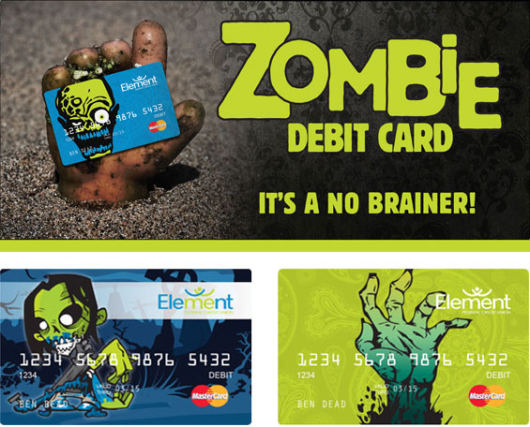 72. Have a stamina contest.

Here’s an idea for an auto loan promotion: everyone who asks about an auto loan is entered into a drawing. Ten winners are assembled at one of your branches on a Saturday where they lay one hand on a new vehicle you’ll award to the last person to be touching the vehicle. You could also run this kind of contest at a state or county fair. BofA ran a similar promotion where contestants had to keep their hand on a branded-jersey to see who would win season tickets for their favorite NFL team — “Last Fan Standing.”

If you’re going to be the “fun bank” (or “fun credit union”), you might as well make some noise about it. Consider changing your institution’s branding tagline to something that celebrates your focus on making financial matters fun.

74. Put a big smile on your brand identity.

Refresh your brand identity with a bright, vibrant, playful design. Make your brand identity something that consumers enjoy looking at and have fun interacting with — something they look forward to. Let your creativity and imagination run wild. Copy should be light, clever and friendly. And be brutally honest, because nothing is funnier than the cold, hard truth.

Make a display with some assortment of bills and ask branch visitors to guess the amount. Be sure to tell the public about the contest and give the promotion adequate marketing support. Alternate version: put the display in a shopping mall for increased exposure and PR value.