These things are a blast. Objects are projected onto the floor, where motion detectors interpret people’s actions, allowing them to interact with the objects. You can kick things like soccer balls. Swipe things off the screen like sand. It’s loads of fun, and something financial marketers can easily make relevant to banking (e.g., coins, piggy banks, etc.)

Consumers love cash, so start handing out free money in public. Just be sure to bring your camera, because you’re going to have some great material for TV stations and viral YouTube campaigns. Businesses in every other industry give away their inventory, so why not banks and credit unions? Invite people in for some “free samples from the vault.”

If you want to build your brand and your internal culture around the concept of “fun,” that means you’re going to need fun people on board. It shouldn’t be very difficult finding questions HR can ask in interviews to screen prospective job seekers and see how fun and/or witty they are.

When a PNC customer is banking online, they can just “punch” a little piggy bank icon that pops up from time to time. Whenever they “Punch the Pig,” money transfers from checking to savings in a pre-defined amount specified by the customer. For smartphone users, the “punch” is actually a “shake”. Users can decide how often the pig pops up or choose to let PNC surprise them randomly.

Countybank cooked up a clever campaign targeting businesses in the bank’s area. They offered new business customers a free biscuit breakfast for up to 13 people delivered to the firm’s doorstep as long as the business was willing to meet with a Countybank representative.

Countybank Cooking Up Biscuits for Breakfast

Commonwealth Bank assembled 935 people wearing Aussie team colors to break the Guinness World Record for “most people wearing the same team uniform in a photo.” This stunt, organized by Commonwealth as part of the 2012 Olympics, reminds financial marketers that there is a lot more to PR than just pounding out corporate press releases. Commonwealth managed to get themselves on the front page of every paper, on the homepage of every new website, and on every news broadcast in Australia. And what did it cost them? Basically nothing. All they had to do was invite a bunch of Aussies to a barbie, then give them beer and jerseys.

Standard Chartered Bank went one step further (actually many steps further) when they became the first bank on earth to have someone use their mobile banking app at the peak of Mt. Everest.

People love to gamble. So if someone wants to sock some money away for a while, why not do it at a bank or credit union where they have a random shot at winning a few thousand extra bucks? A savings account lottery is a fun, innovative way to capture consumers’ attention and encourage positive savings behaviors while generating new account activity for financial institutions. Just make sure prize-linked savings schemes are legal in your area.

34. Make a friendly bet with a competitor.

Challenge a competitor with a wager. It could be a local rival — say a bank vs. a credit union. Or it could be a non-threatening institution in another part of the country (even the world). When Notre Dame’s football team played Alabama for the national championship, two credit unions — Notre Dame FCU and Alabama Credit Union — competed to see who could get the most credit card applications by game time. The loser had to pay $10,000 to the charity of the winner’s choosing.

There are few amusements at live events as alluring as those booths that blow cash around. Lucky consumers get to step inside for a predetermined amount of time and snatch all the cash they can from the monetary whirlwind. It’s fun for everyone, and relatively easy to control your risk/exposure/costs. 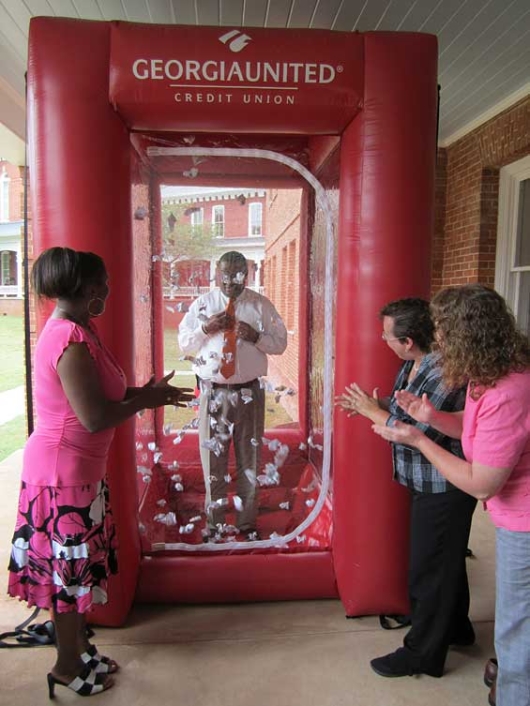 When Umpqua Bank opens a new branch, they send out a branded ice cream truck to hand out free frozen treats to everyone within a five-mile radius of the new location. The bank also has an “Icicle Tricycle” that they take to community events. 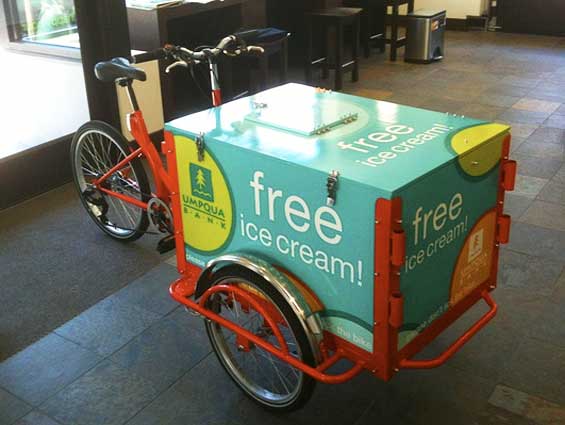 Using motion tracking, pedestrians can interact with LCD screens mounted in your branch window displays. Citizens Bank did this with an interesting nature theme, and Grow Financial had a virtual “grab-the-cash” game that passersby could play. 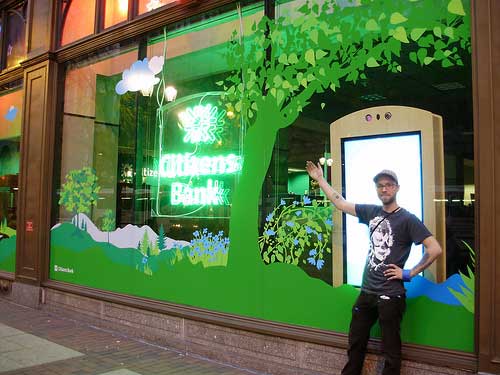 Whenever you have a contest or sweepstakes, you can make your prizes fun. OnPoint Credit Union used an all-you-can-grab supermarket sweepstakes where winners had three minutes to stuff everything they could fit into a shopping cart.

USA Federal Credit Union used “Spike,” a bulldog to deliver all manner of amusing headlines. And Georgia United used “Aunt Sophie” — a cute little old lady — as their sassy, no-nonsense and unexpected spokesperson. Another credit union created “BubbaLuv.” And E*Trade has been using its talking baby spokes-infant for nearly a decade.

One credit union decided to have fun with the Mayan prediction that the world would end on December 21, 2012. If that indeed happened, the credit union promised to forgive any of its members new auto loans. And if the world didn’t end, then members would be stuck with a killer rate on a great auto loan.

There’s a lot that people can get mad about in banking. So why not stage a protest for them. President’s Choice (a supermarket in Canada with a financial arm) had its employees march in front of their locations with protest signs that said “Stop Paying Bank Fees.” Members of the press and various supporting materials were also on hand. 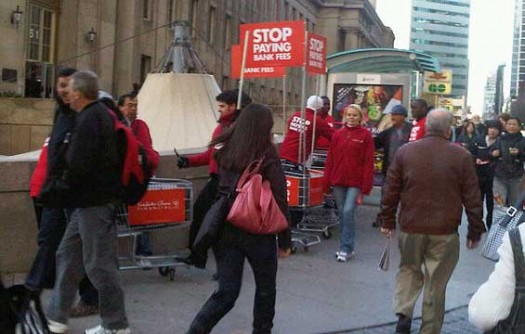 Eastern Financial Florida Credit Union ran a barf bag promotion back in 2006, the headline, “Is Your Bank Making You Sick?”

If you want to create a fun banking experience for consumers, you’re going to have to maintain a fun internal culture. You should “walk your talk” with employees. Don’t tell them to have fun; show them how to have fun. (Hint: Rows of lifeless, depersonalized cubicles are not conducive to a fun workplace.)

Social media is fun, and it’s a part of our everyday lives. Only a fun-hating organization would block access to social media sites. And besides, everyone has a smartphone these days, so isn’t it kind of pointless?

Talking babies and talking animals are always funny fodder in ad land. First Direct used a platypus. First Tech Credit Union used talking squirrels in its commercials. And who can forget the devious comedy in this series of TV spots from Ally starring hapless kids? GEICO’s crazy commercials prove that you can be funny doing just about anything you feel like.

You can fight attrition by acknowledging people’s tenure. Start with their first anniversary — even just a simple card saying thanks. Loyal customers (or members) might get a yummy treat sent to them on their fifth anniversary. On their tenth, they might get a gift card. In the years in between, you could send amusing reminders about the advantages, benefits and savings they’ve realized in the last year by being a customer.

47. Have fun in social channels.

If there is anywhere that you can let your hair down, it’s on Facebook, YouTube and Twitter. Don’t be afraid to do create unusual content for your social channels — photos, tweets, cartoons, jokes, videos, etc. If you can’t have fun here, then the “fun strategy” probably isn’t for you. Conversely, don’t try to build a fun brand if your CEO or compliance people force you to play it safe and straight in social channels. You can’t say, “Hey, we’re all about fun,” if you’re not having any fun on Facebook.

Whenever you print a direct mail piece, always be looking to do something more than just your standard 6×9 postcard or 8.5×11 letter with a #10 envelope. If you have to send out a standard letter/envelope, at least stick something “lumpy” inside — like a pen. The post office will let you mail just about anything you can stick a stamp on, so they don’t care if you put “lumpy” stuff in your envelopes. Sure you’ll pay a bit more for postage, but you’ll also get a much higher response rate. And it’s fun for the recipient, almost like they are getting a little gift in the mail. With DM, you should always introduce one or more tricks/techniques to make the piece more fun and engaging — a die cut, unusual fold, unusual paper/texture, pop-up, foil, translucent envelope, etc.

There are any number of ways to structure fun trivia contests. One question or many. One big prize or lots of little ones. Online, offline, on Facebook or Twitter.

The next time you listen to a stand-up comedian as they work through their routine, pay close attention to the things that make you laugh the hardest. Those will invariably be the subject matter you feel holds the most truth. Comedians love taking unspoken truths and turning them into punch lines.