A national study reveals what consumers think about branches today, and why the brick-and-mortar channel still has relevance.

By Julian Vermaas, VP/Client Services at The MSR Group

There’s been a great deal of debate about the future of branch banking as declining transactions and increased adoption of electronic channels have left many brick and mortar locations on the chopping block. If branches went away, what kind of impact would this have on the typical banking consumer? More than you might think.

According to The MSR Group’s National Banking Study, consumers not only like the idea of branches, they continue to use them. In this online survey of over 1,300 banking consumers across the nation, 70% of respondents say they have used a branch to conduct their personal banking business within the past two weeks.

A Matter of Convenience

Only 25% of consumers overall identify the branch as their preferred channel. However, even those who say they would rather do business through automated services (online, mobile or ATM) are using branches on a regular basis. Over 60% of those who prefer using other channels have actually conducted business at a branch in the past two weeks. 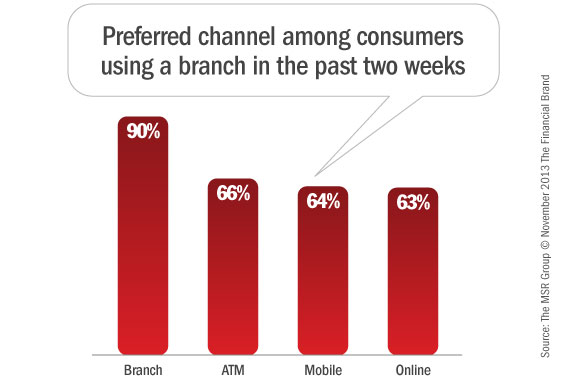 When asked why they chose the branch versus other channels on this most recent visit, 43% said it was because this was the quickest, easiest way to complete their task. Survey participants often referenced using the branch to make a deposit or withdrawal because they couldn’t or wouldn’t do it another way.

Physical convenience was key as well, with 20% indicating the branch was near their home or work or where they happened to be at the time. In addition, sometimes it’s just easier to resolve a situation with face-to-face communication—6% said they needed to speak with someone.

( Read More: Are Branches Dead? No Way, According To Performance Data )

Survey participants were asked to describe what makes each channel better than the others. Not surprisingly, the most common responses to “What is better about branch banking compared to other available options for interacting with your bank?” centered on personal service (35%). Being quicker and easier was mentioned by 23%, while 13% said the branch is best when they need to speak with someone.

Aside from an affinity for personal interaction at the branch, speed and ease of use are driving factors in banking consumers’ decisions regarding channel usage. When asked why they chose a different option than the branch for their latest transaction, over 40% of those who used either online banking or mobile banking said that what they needed to do was quicker and easier via these automated channels.

Whatever Fits My Needs

Essentially, people choose the channel that allows them to meet their specific financial need as quickly and easily as possible. Sometimes that may be online or mobile banking, other times may require face-to-face conversation at the branch and still others can be resolved through a phone call.

While some channel attributes are inherent, others can be enhanced by incorporating the strengths of other channels. For example, including a live chat element on your website promotes a personal connection and provides immediate answers to questions or problems. The option of interacting with a “real person” can make customers more comfortable with the technology. Taking this a step further, video tellers like those at American Heritage FCU in Philadelphia provide virtual “face-to-face” service and allow you to serve members/customers in more locations without the investment of a traditional branch. On the other hand, enhanced technology, operational changes and improved training at a traditional branch can speed interactions and customers’ perceptions of the time and effort required to conduct their business.

( Read More: Poof! Branch Transactions Drop By Half in 20 Years )

Still a Place for Branches

Regardless of which channels are customers’ favorites, there are some things they just feel more comfortable doing at the branch. As familiarity with automated channels continues to increase, mobile check deposit and ATMs that dispense multiple denominations of cash will become more readily available and accepted. However, when it comes to dealing with their money, few customers would be satisfied with completely taking people out of the loop.

As one participant commented:

And, of course some of those personal interactions simply can’t be duplicated through other channels:

Julian Vermaas is Vice President, Client Services at The MSR Group, a full-service market research company specializing in customer satisfaction measurement, brand awareness, and advertising and creative testing. With over 20 years’ experience in the market research field, Julian serves as a research advisor and consultant and directs the firm’s analytics team.