Subscribe Now Get The Financial Brand's FREE Email Newsletter
Here's a list of do's and don't for acquiring Facebook fans -- lessons learned from the brands that are gaining and losing the most ‘Likes.’

What might cause a brand to lose Facebook fans? Because that happened to 7% of the banks and credit unions The Financial Brand tracks in its Power 100 social media database. These are some of the biggest, presumably most successful financial institutions on Facebook, and yet one out of every 14 actually shed ‘Likes’ last quarter.

Brand pages on Facebook are managed by people. And these people are just like everyone else; they like being liked, so shedding fans feels like a nightmare. There are some lessons to be learned from these unfortunate situations, so here’s a list of Do’s and Don’ts for building Facebook fans and engagement. Keep in mind, this advice is based on what really happened to brands that lost fans… as well as those who saw massive gains in the same timeframe.

Between April and June 2013, Barclays and CIBC both gained fans at a very high rate. During this period, both brands rallied around major sporting events. For Barclays, content and promotions surrounding the English Premier League and Wimbledon fueled their increase in fan acquisition. For CIBC, the bank hosted the FIFA World Cup trophy at a number of locations allowing fans to pose with the trophy and post their images. With this strategy, you are essentially pandering to people’s passions. 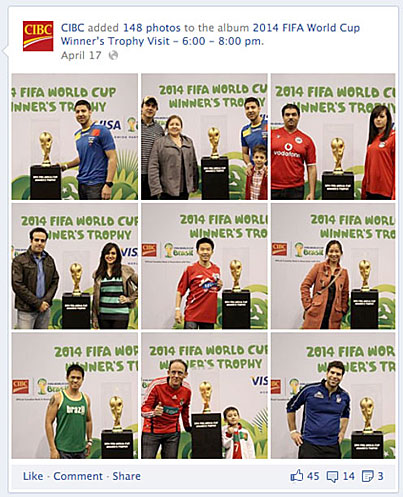 Key Takeaway: These “shared passion” posts was a consistent winner among all top-performing financial institutions on Facebook. Of course it makes sense, content that is highly engaging will get your brand to show up in the feeds of your fans creating amplification (which we all love).

Don’t: Talk About Yourself Incessantly

It has been said that social media is a lot like a cocktail party, and as such, you should not spend all your time at the party trying to sell everyone in the room on your business. You’ll never get anyone to pay attention to you if you are always talking about yourself. It is boorish behavior, whether in person or online. And we have proof that it results in a net loss of fans.

One of the chief offenders (who will remain anonymous) shed about half of their entire fanbase. In the first quarter of 2013, they had more than 3,200 fans, but 90 days later they had only 1,669. Why did this happen? Analyze their Facebook page and you’ll find self-serving posts.

Key Takeaway: If every post on your social profile is all about you and offers very limited value to the audience, you will lose fans… and fast. Look at the pronouns you’re using. Ditch “we” and “us.” Use “you” and “your” instead.

An example of a self-serving post — “Enough about me… now let me ask you some more questions about me!”

Promotions drive new fans, but the jury is still out as to whether these are short-term, low-value, unengaged fans or not. Nevertheless, the fact remains that promotions drive a lot of fan growth. Between April and June 2013, Barclay’s UK increased their fan base by 112%, achieved by running modest, simple promotions, like counting the tennis balls in a picture, or downloading their new mobile app to win movie tickets, and so on.

Key Takeaway: Promotions get fans. Keeping them and getting them engaged is a whole different challenge. 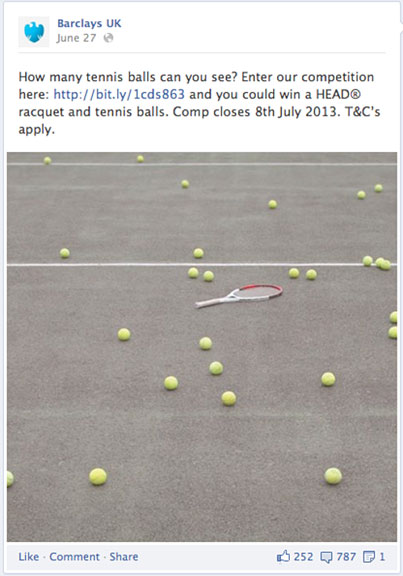 Don’t: Be a Broken Record

When you do have a promotion, don’t make every post about that promotion for a solid week straight. Just because you’re not talking about yourself all the time doesn’t mean you shouldn’t vary your content from day to day. One of the brands who lost over 1,200 fans ran a promotion to generate new fans, but guess what? Every post that week was about the promotion. It backfired.

Key Takeaway: Four consecutive posts on the same topic is a big “don’t.”

Read More: Facebook Engagement in Banking – How The Top 5 Brands Get It Done

Do: Give Them Ways to Save

It is no secret that people love to get a bargain. ING Vysya shares offers, coupons and deals with their Facebook fans. It must work, because their audience grew nearly 270% in only three months. Coupons and offers are truly value-added content to people. They pay attention to it and align with it very easily. This content is very focused on the user and what is important to them.

Key Takeaway: Reward fans with deals. Coupons and discounts are incredibly easy to use and afford strong visuals. 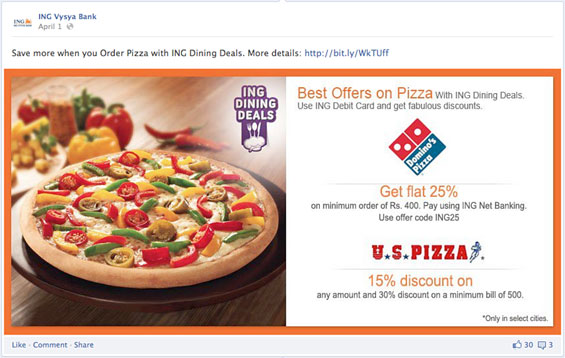 Don’t: Bore Them to Death With Financial Education Tips

Posting saving tips sounds like a wonderful content strategy for Facebook, but they tend to fall flat. While people like a deal, they do not want to be told how to spend and save their money. There is a strong perception among financial marketers that people want this, but, based on the performance of one financial institutions in The Financial Brand’s social media database, they lost nearly 2,000 fans in the second quarter by pursuing a “financial education” strategy. In fact, the top three financial institutions that lost the most fans in Q2 2013 invested heavily in this type of “fin lit” content.

Key Takeaway: Most institutions post money-saving tips, and they still manage to grow their fan count. And yes, some people do react to these postings. Just use this type of content sparingly.

Read More: 7 Things Banks & CUs Don’t Do In Social Channels… But Should

Do: Be Personal and Personable

Photos yield strong engagement. And when you post local photos of real people in your community engaging with your brand, people will pay attention. Just ask the team at Scott Credit Union. Their fans increased 280% in second quarter of this year. Their posts generally spotlighted their work in their community, including local photos, events and helpful content about goings-on in the local area.

Key Takeaway: People love looking of photos of familiar things and people, particularly themselves, their friends and their family. This is content they like to share with others. 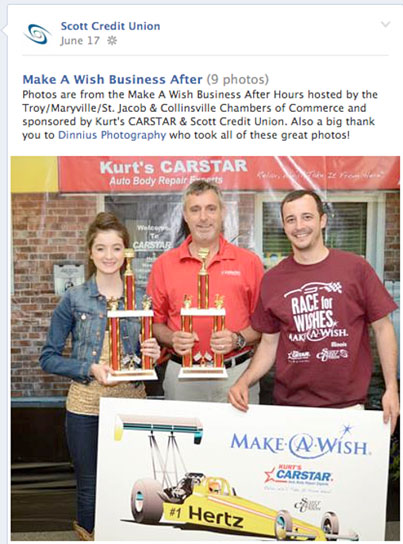 Don’t: Scare the crap out of people

The brand that experienced the highest percent of lost fans in Q2 posted a significant amount of content that may have been perceived as frightening. Posts about fraud, theft, scams, what to do when you lose your wallet — yikes!

When people are on Facebook they are catching up with friends, they do not want to be greeted by Debbie Downer or Timmy Trouble from their local bank. Think about it: Do you really want people scanning their Facebook posts only to see your brand, your name and the word “fraud” tied together? 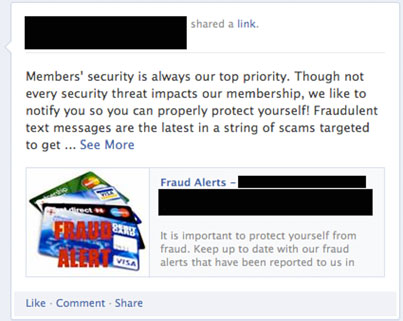 Tracey Parsons is the Digital Strategist at Social Media Explorer. With more than 15 years in digital, Tracey is dedicated to bringing cutting edge, thoughtful and measurable solutions to marketers. She has worked with some of the world’s most recognized brands to develop and devise cutting-edge social, mobile and digital marketing practices. Connect with Tracey on Twitter @tparsons.