Small institutions need to do more to promote surcharge-free ATM access if they are to meet consumers’ demand for convenience, and should consider adding ATM fee rebates for higher value customers.
Subscribe Now!

Many consumers try to avoid paying ATM fees by choosing institution with convenient locations, having accounts with institutions that offer access through surcharge-free networks such as AllPoint or MoneyPass, or having an account with an institution that rebates ATM fees when using a foreign ATM.

Thousands of consumers shopping for banks and credit unions search FindABetterBank every quarter. Analyzing these searches reveals that convenience drives selection for most shoppers, and the ubiquity of locations of national banks plays a big part in why they’re selected… 45% of the time.

But many institutions listed on FindABetterBank — particularly smaller institutions and direct banks — offer either surcharge-free ATM access or ATM fee rebates. How popular are these features? And are there differences in shoppers that want one or both of these features? 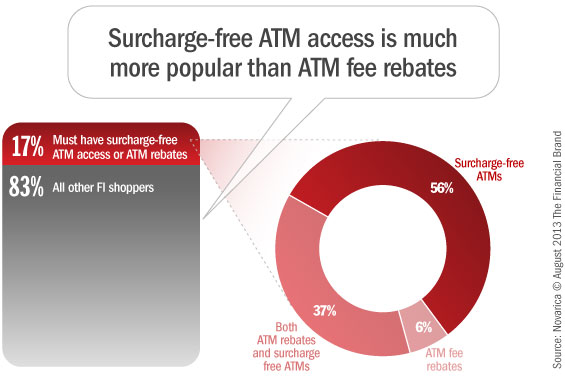 However, further analysis of consumers’ ATM usage patterns shows that those who like ATM fee rebates withdraw cash from ATMs more frequently than those who just want to use surcharge-free ATMs. At the same time, the ATM rebate crowd also carries higher balances and (according to them) overdraw their accounts less frequently.

As it turns out, consumers who want surcharge-free ATM access are more likely to select a community bank or a credit union.