A collection of 10 new and notable name changes from banks and credit unions around the world.

Old Name: 66 Federal Credit Union
Reason for Change: Confusion about who could join

Analysis: The credit union used to serve the employees of Phillips Petroleum, whose gas stations were known as “Phillips 66.” But times have changed, and the credit union has changed along with them. Now that the credit union serves multiple employee groups — not just those in the oil industry — they felt it was time to rebrand. “Truity” is a coined name created by Weber Marketing Group, who blended the words “trust” and “integrity.” The mark is intended to represent the flames of truth, knowledge and service. Despite what some people think of coined names (a few really dislike them), there is good reason to go this route… all the good names are taken! The Financial Brand estimates that 9 out of every 10 name changes in the banking industry expose the organization to serious trademark risks; many would lose a lawsuit. In order to get a clean trademark these days (and a decent URL!), one of the safest solutions is to coin a new word or phrase. That’s why they do it on the internet all the time: Facebook, YouTube, Flickr, Zynga, Tumblr, Instagram, etc.

Analysis: The limitations of geographic names become all too clear whenever financial institutions merge — one’s name won’t work in the other’s backyard, and vice versa. But Bankwell is a good, solid, strategic solution. First, the bank isn’t repeating the problem with another new geographic name, like “Connecticut State Bank” or something similar that would hinder expansion beyond the state where they are currently based. Second, Bankwell is a coined word, making it more easy to trademark. But it isn’t some goofy moniker that sounds like a drug (e.g., “take Zelucidate twice daily”). It’s a call-to-action, almost a mantra or battle cry: “You should bank well!” It’s a command using “bank” as a verb instead of the soiled noun. It’s a bold, direct statement with an inherent promise that consumers will have a positive experience. As an added bonus, the bank doesn’t need to add the descriptor “bank” to its name (i.e., it’s just “Bankwell,” not “Bankwell Bank”). Furthermore, there are strong, positive connotations with the wordpart “well.” Wells have depth. They are used to store an abundance of a necessary resource. The new tagline is “Bank smart. Bank local. Bank well.”

Analysis: The bank was frustrated by sharing its name with its closely situated competition, Naugatuck Valley Savings and Loan. The bank also hopes to expand beyond the Naugatuck Valley. An “ion” is a an atom or molecule with a net electric charge due to the loss or gain of one or more electrons. But Jane and Joe Average probably don’t know that, nor do they care. All that matters is that the word “ion” is short, easy to remember and sounds like something techy. The bank could also play on the word: “We keep an ‘eye on’ your money.”

Analysis: First the credit union was called Northern Massachusetts Telephone Workers Credit Union. Then it was Northern Massachusetts Telephone Workers Community Credit Union. Then NMTW Community Credit Union. Now it’s just “Align.” It’s hard to criticize a name that gets chopped down from 57 characters to only five. There’s a nice story you can tell around the word “align,” and it’s easy to imagine how “align” could be used as a guide for a visual identity system — everything neat, tidy and organized.

Analysis: How would you feel if your organization’s future was tied to the fate of the U.S. Postal Service? Fearfully nervous? Yeah, probably. Today there are only 100 credit unions left with the word “postal” in their name, but only 25 years ago, there was nearly three times that many. Many have gotten the proverbial memo — delivered by email, no doubt — and one thing is clear: delivering the mail is not what you would call “a growth industry.” It was very smart for Blue Eagle Credit Union to pick the new name that they did. The “Blue Eagle” name and logo honors the credit union’s history serving postal workers. The new brand makes a reference to the USPS logo that current members will both recognize and appreciate. It doesn’t matter if anyone else sees the allusion. Using a color in your name is a powerful branding technique; pairing “blue” with “eagle” is almost like naming a new, imaginary animal (e.g., blue elephant, blue giraffe). It’s evocative on its own, whether you understand it’s a nod to the USPS or not.

Analysis: The credit union says the word “heritage” connects the heritage of the early pioneers who settled in their area, the heritage of the city of Salem where they are located, and the co-op’s heritage serving state employees. The word “grove” is intended to signify a group working together, as well as a place to gather and prosper. The “heritage” theme is a popular one in the credit union industry — 33 have the word in their name (10 start with it). Only four other credit unions have use the word “grove.” Heritage Grove FCU worked with Raoust+Partners on the rebranding project, who produced an attractive logo and a very nice website, among other outcomes. 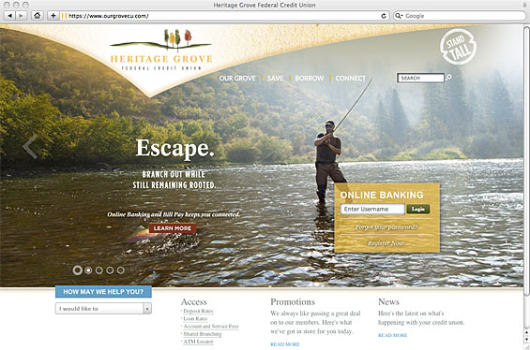 Analysis: The bank wanted to expand beyond its base in Lowell, Massachusetts and felt its name was a hindrance. The new “Sage” name is short, logical and has a positive message. (Bonus: it’s a plant and a color, too.) The word sage is synonymous with intelligence, and sage is a wise thinker — a guru. Those are all desirable attributes for a financial institutions, a fact not lost on other firms in the financial industry that also share the “Sage” name. If the bank ever gets into the investment game, they could be facing a trademark dispute from any number of sage investment companies.

Old Name: Kaiser Federal Bank
Reason for Change: They were originally chartered as a credit union to serve employees of Kaiser Permanente. They switched to a bank charter and wanted to expand beyond Kaiser employees.

Analysis: This name makes sense for a member-owned cooperative, and has positive connotations that could be used to link money, lifestyles and community. But it presents a few trademark challenges. First, and most significantly, there is another credit union one state away that’s already using the name “Connection” — very close… too close for comfort. And the logos for the two credit unions are eerily similar: a blue river flowing from a green mountain. There is also Connect, Connex and Connexus credit unions, any of which might have a trademark beef.

Analysis: The credit union serves more than just those health care workers living in Greensboro — they cover the whole state of North Carolina — so it makes perfect sense to change names. The new name still makes a clear and obvious connection to the credit union’s field of membership. However, there are 89 other credit unions in the U.S. with the word “health” in their name, 31 of which start with the word “health.” Although remarkably none of these other CUs are in North Carolina. Six credit unions besides HealthShare use “share” in their name. Presumably the credit union chose common terms to create a name that felt comfortable and familiar.