Here are the top 100 banks and credit unions on Twitter ranked by their total number of followers as of the second quarter of 2013. If you think your bank or credit union should be listed and it isn’t, click here. 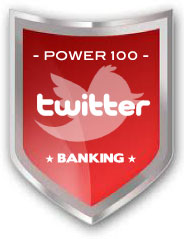 Financial institutions first started dabbling with Twitter in 2007. In fact many banks and credit unions chose Twitter — not Facebook — as the first social network they engaged in. They’ve had six years to accrue their following, so The Financial Brand partnered with Social Media Explorer to see how the everyone is performing.

Twitter followers are much harder to come by than Facebook fans — 10 times harder to be precise. The top 100 financial institutions on Twitter have a combined total of 1.3 million followers, an average of 13,407. This is a sliver of what the top performing banks and credit unions on Facebook have been able to accomplish, where the average is 212,977 ‘Likes.’ The top three banks alone have seven times as many ‘Likes’ as the top 100 financial institutions have on Twitter totaled together.

A third of the financial institutions listed in the “Power 100 Twitter” rankings have more than 10,000 followers. There are only two credit unions with that many. Navy FCU (#26) has 12,285 followers, but they are edged out by an account left dormant by First Community (#25). It’s sad to see the world’s biggest credit union Twitter account abandoned.

Note: All data covers Twitter activity through April, May and June 2013.