Here are the top 100 retail financial institutions on Facebook ranked by the number of new ‘Likes’ they received in the second quarter of 2013. If you think your bank or credit union should be listed and it isn’t, click here. 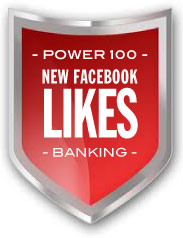 The Financial Brand partnered with Unmetric to assess how quickly the world’s most successful banks and credit unions on Facebook add new ‘Likes.’ After pulling the stats for roughly 500 financial institutions over the last two quarters, we now have the data to run an in-depth analysis — the first of its kind anywhere in the retail banking sector.

Crunching the numbers, one thing becomes painfully clear: Financial marketers shouldn’t expect to add thousands of new ‘Likes’ every quarter. That’s extremely hard to do, even for the best banks and credit unions on Facebook today. The “Power 100” database encompasses the world’s top performing financial institutions on social networks, and even among this crowd the number of new ‘Likes’ is typically around 200 per quarter, or about two new ‘Likes’ every day.

Among the 500 banks and credit unions in the “Power 100” database, two thirds added less than 500 new ‘Likes’ in the last 90 days. One in 14 financial institutions actually lost ‘Likes’ — net negative “growth.” And keep in mind: These are some of the biggest financial institutions on earth, and they are throwing significant resources — both manpower and money — at their social media initiatives.

The number one reason financial institutions lose Facebook fans: contests. Banks and credit unions love hosting giveaways on their Facebook pages. These work like artificial sweeteners though, dragging in prize-seekers who have no intention of maintaining a social connection with a financial institution for any length of time. They are there to win something — and that’s it. The financial institution may see a big — and temporary — spike in ‘Likes,’ but as soon as the contest ends a flood of quasi-fans runs for the exit.

If you took the totals for the top 100 retail financial institutions that added the most ‘Likes’ on Facebook, you’d have an impressive 2.6 million new ‘Likes’ in 90 days. But 72% of those new ‘Likes’ belong to the top 10. Those near the bottom of the “Top 100” list are barely adding 10 new ‘Likes’ a day, which might sound impressive to a financial institution with $200 million in assets, but for banks with millions of customers and billions in assets it’s barely a blip on the screen.

Note: All data covers Facebook activity through April, May and June 2013.