Here are the top 100 credit unions on Facebook, Twitter and YouTube ranked by their Power 100 score for the second quarter of 2013. If you think your bank or credit union should be listed and it isn’t, click here. 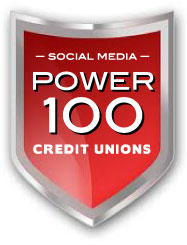 All but seven of the world’s most active credit unions in the three major social networks come from the U.S., and the majority are among the largest by assets.

Navy FCU is the biggest credit union in the world — and by a wide margin — so it’s no surprise that they are in the #1 position. They accomplish this by having a solid presence in all social channels. What is very surprising, however, is that Pentagon FCU, the third-largest credit union on earth, ranks only #90, and SECU, the only credit union smaller than Navy isn’t even on the list.

Credit unions have the most social traction on Facebook, where successful institutions are seeing around 5,000 ‘Likes’ and an engagement rate hovering around 4.0% — pretty good. Credit unions doing well on Twitter have approximately 1,500 followers and have sent 1,750 tweets. But YouTube is a struggle, where even the best credit unions can only muster between 50,000 and as few as 7,500 video views.

Financial industry insiders might assume that credit unions — with their feel-good community vibe — would have enjoyed relative success with social media compared to their bank brethren, but that’s not necessarily the case. While they’ve been early pioneers in social spaces, they haven’t reaped many of the rewards. Considering many have been horsing around with various social platforms for over six years, many can’t seem to build any kind of following.