Here are the top 100 retail banks on Facebook, Twitter and YouTube ranked by their Power 100 score for the second quarter of 2013. If you think your bank or credit union should be listed and it isn’t, click here. 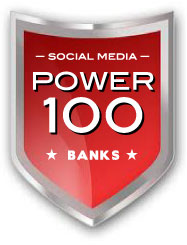 A bank with trillions in assets has a much easier time amassing a few million followers in social channels, but there are only a few of those. Everyone else in the banking sector has had to work diligently to build the social media community they have today.

While most financial institutions only excel in one social channel (if that), the majority of banks in this Power 100 list are strong in at least two. Facebook may be the world’s biggest social network, but a bank doesn’t necessarily have to have a page with a gazillion fans to be included in this list. While the highest ranked banks have over 1 million ‘Likes,’ some in the list have around 1,000 ‘Likes’ and one has even less than that. Same thing with Twitter. A dozen of those listed in the “Power 100 Banks” have less than 1,000 followers, even though the biggest have over 100,000. Eighteen banks have broken one million video views on YouTube.

Unlike the “Power 100 Credit Unions” where the U.S. dominates, banks from around the world are more evenly represented in the list of “Power 100 Banks.” About half hail from somewhere other than America. There are ten from the UK, nine from Australia, eight from Canada and 23 others from countries including Ireland, India, Nigeria, New Zealand, the Philippines, Singapore and Switzerland. Three banks from India are in the top 10, but they also have 1.24 billion people vs. an island nation like New Zealand with only 4.4 million.