The new Ally Bank tagline, “Your money needs an Ally,” reflects the organization’s philosophy that stresses the importance of putting the customer first. 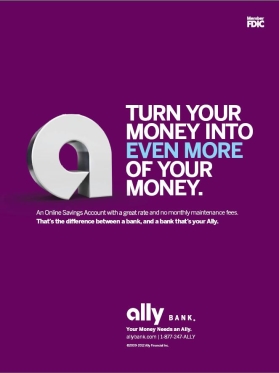 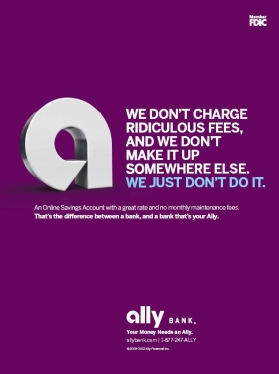 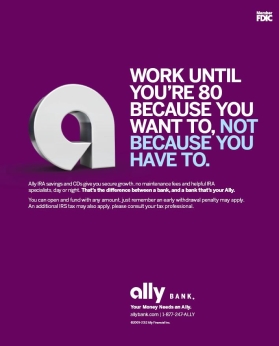 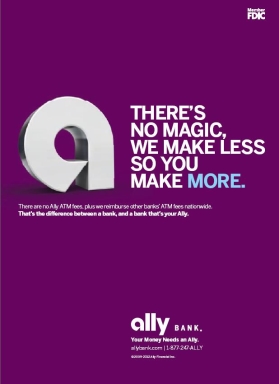 Today, the first two “Stages” broadcast commercials in the new campaign will begin airing on networks nationwide. Named “Robot” and “Predictions,” both spots illustrate the advantages of banking with an Ally in today’s ever-changing financial landscape.

“Robot” demonstrates the benefit that live human interaction offers, versus automated systems. The spot highlights Ally Bank’s 24/7 live customer service, which has achieved customer satisfaction scores near 90% throughout 2012. This service, alongside Ally’s no ATM fees, no monthly maintenance fees and Sleeping Money Alerts, supports recent Bank recognitions, including one of the top five “Most Trusted Companies for Retail Banking” by the Ponemon Institute (July 2012).

“Predictions” includes Thomas Sargent, Nobel Laureate in Economics, who is asked to predict what CD rates will be in two years—and is unable to do so. The commercial features Ally Bank’s popular Raise Your Rate CD, which offers the option to increase a rate once over the two-year term CD or twice over the four-year term CD should rates go up. Like all Ally Bank CDs, the Raise Your Rate CDs require no minimum deposit to open, feature no monthly maintenance fees and offer the Ten Day Best Rate Guarantee.

In 2012, Ally Bank customer loyalty remained strong, with customer accounts having grown to nearly 1.1 million (up 27 percent year-over-year), and a steadily increasing deposit base.

In addition to the convenience of 24/7 live customer service, highlighted in the launch of the “Stages” ad campaign, Ally offers customers features like mobile banking, a debit rewards program, Ally Perks, and a person-to-person payment service via Popmoney. The bank’s Raise Your Rate CD is part of a broad product line including interest checking accounts, online savings accounts and a suite of IRA products among others.

As consumers are leveraging technology and media in new ways, Ally Bank has expanded its campaign into cinema and tablets to reach broader audiences.

“Our customers are smart and sophisticated and we try to make sure our advertising speaks to them intelligently and in an interesting, memorable way,” said Diane Morais, deposits and line of business integration executive for Ally Bank. “Three years after launching the Ally Bank brand, we continue to look to our customers for their input and provide them with the products and services that are important to them. Customers are looking for an ally in banking and that is what we aim to be.”

Grey New York is the agency behind this advertising campaign.