The big are getting bigger, while small credit unions are shrinking. If current trends hold, half the credit unions around today will be gone in the next 20 years.
Subscribe Now!

The Financial Brand examined asset, member and branch trends in the credit union industry for the years 2007 through 2012. The study revealed a series of massive shifts with serious strategic implications for credit unions of all sizes.

What’s Changed in the Last 5 Years?

Key Fact: Every month, the industry sheds about 20 credit unions.

Key Fact: Branch growth has been generally flat for credit unions, but not for the top 100. While the industry has only added 712 new branches in the last five years, 552 of those belong to the top 100 (77.5%).

Key Fact: Membership gains from the top 100 credit unions are generally offset by the collective membership losses realized by the rest.

The Big Just Keep Getting Bigger

The Small Get Smaller

Key Fact: Over a five-year period, small credit unions (those with less than $100 million in assets) have collectively lost $5 billion in assets and nearly six million members.

2032: What Will Credit Unions Look Like 20 Years From Now

If you stretch current trends out 20 years from now, the credit union industry will look remarkably different than it does today. 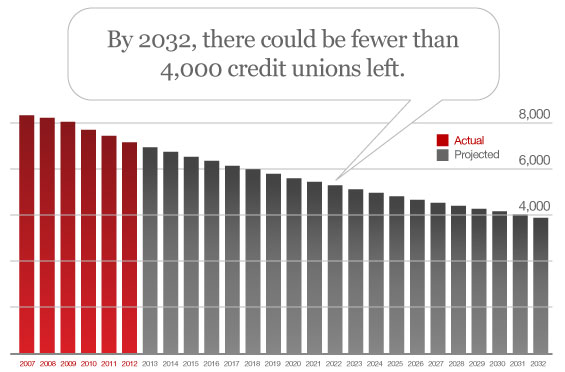 On a brighter note, overall industry assets should more than double, hitting $2.2 trillion if credit unions sustain an 4% annual growth over the next 20 years. And if membership gains average 1.5% per year, credit unions will hit 126.2 million members by 2032, an increase of 32.5 million new members. If those numbers indeed materialize, that would mean exactly one in every three people in the U.S. would belong to a credit union in 2032 (vs. 29.3% today, a 4% increase). Of course, the vast majority of those members will be associated with the biggest credit unions in the country.

As for the size of the credit union industry’s branch network, a five-year retrospective analysis isn’t very helpful. At face value, the data might suggest the number of credit union branches will plateau, perhaps holding steady around the 20,000 level. That’s not likely to be the case. Experts in the banking industry broadly agree that branches are on the decline. If their predictions come true, there could easily be half the credit union branches there are today. Or even fewer.

Bottom Line: Asset growth will come much easier than member growth… for those credit unions that survive the coming purge. Membership growth has always been — and will almost certainly continue to be — the biggest challenge credit unions face. Small credit unions will have to fight just to avoid losses, both assets and members.

A world with only a couple thousand credit unions — each with only one or two branch locations — could be closer than you think.