TruStone Financial FCU invited a small group of members to their Plymouth headquarters to tour the facility and get a behind-the-scenes look at the inner workings of their credit union.

On Thursday, August 11 at 9 am, the unusual, all-day member workshop kicked off. The nine curious members traveled to various departments of the credit union, including finance, retail operations, legal, investments, IT, human resources, marketing, loss mitigation and the contact center. They were able to observe the credit union’s day-to-day operations in action, meet employees, and gain a high-level overview of how their financial cooperative operates.

The group also had a luncheon with the Chairman, CEO, COO and CFO, followed by a friendly Q&A.

“It was open and honest conversation with our membership,” noted Stephen Bohlig, Chairman of the Board. “They asked questions, and so did we.” 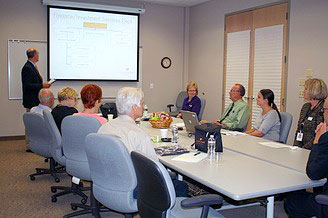 The group included longtime members and some newer members. One 52-year member who attended said, “The openness of the employees, the positive attitudes of the leadership, and the future planning for TruStone was inspiring. I had a very positive experience.”

A newer member who attended said she was enjoyed the workshop and would recommend other TruStone Financial members take the tour as well.

Katie Grindeland, TruStone’s marketing manager recalls how the idea for the open house was hatched. “The CEO walks into my office and says, ‘I have an idea,’” she remembers. “‘I’d like to invite members in to tour the building,’ he continued. ‘I’d like it to be an all-day workshop where they spend a day here, learning about what we do behind the scenes.’”

“I love it,” Grindeland blurted back.

The idea for the event was to, “show our membership where and how their hard earned money is being utilized,” says Tim Bosiacki, CEO.

“This is what the credit union philosophy is all about,” Bosiacki added. “Not only telling our membership how we are a People Helping People institution, but showing them how we are doing this on a daily basis.”

A few weeks prior to the Member Workshop/Open House, TruStone requested members interested in the event RSVP. The credit union even set up a special email address: [email protected]

“We weren’t sure what to expect,” Grindeland recalls. “Do our members even care what we do every day?”

As it turned out, so many members responded that some had to be turned away.

“It was truly a humbling experience,” Grindeland says. “Those of us that work at credit unions — any financial institution — we sometimes forget that our members don’t know what Reg E is. And they definitely don’t know what community charters, SEGs and foundations have to do with each other.”

“I encourage all financial institutions to seriously consider opening their doors to their members/customers,” she added.

Good advice. Why not?