According to Commonwealth executive Ross McEwan, the bank “has a long tradition and significant presence in supporting Australian communities. Community Seeds allows us to enhance our existing program of community activities through embracing new technology to create modern ways of involving partners and consumers.”

This isn’t the first time we’ve seen a social media charitable campaign developed by a financial institution. Back in November of 2009, The Financial Brand featured two well-known and successful examples of financial institutions using social media to elevate and promote their charitable donations: Chase’s Community Giving campaign and Umpqua Bank’s Click-4-a-Cause campaign. What makes Commonwealth’s effort notable are some of the really great social features they’ve embedded in their Community Seeds campaign.

The visual aspects of the campaign emphasize the seed theme as well. “Planting the seeds of community growth” suggests that each dollar donated represents a seed that will bloom into something greater — that the 150,000 total votes will ultimately have an impressive collective impact on community growth.

The call to action, asking participants to “cast your vote” is presented in a way that suggests planting one of those community seeds. As an organization collects more votes, their seed is shown as a growing plant which grows larger with each additional vote received. It’s a simple but powerful way to illustrate growth, and it suggests to each voter that their vote is important. Voters  also given a “virtual seedling” that operates in a similar way, encouraging people to “nourish your seedling.” 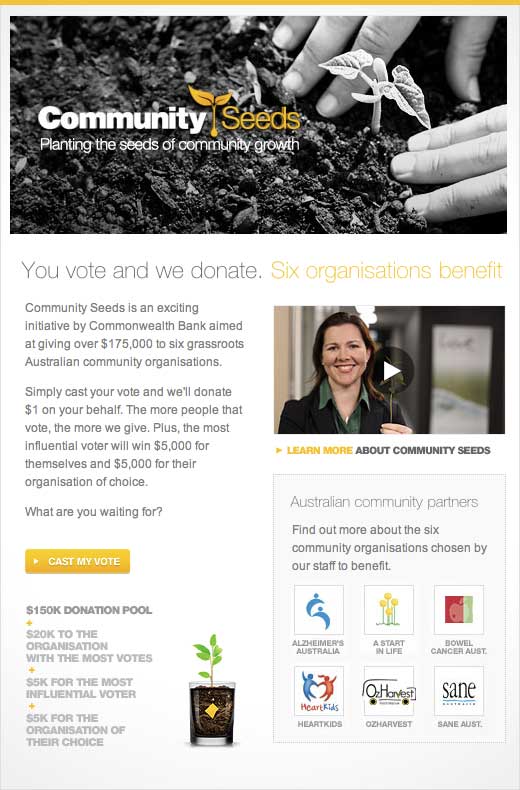 A simple but smart design element is the call-to-action included in Commonwealth Bank’s Facebook profile picture. This call to action directs Facebook visitors to the Community Seeds app, regardless of what they’re viewing on the Commonwealth Facebook page. Moreover, the app gives visitors several opportunities to vote for their favorite organization. Vote from the landing page, or click on an organization’s link to view a video and read more about each participating group. Any of these pages provides an opportunity to vote, thus encouraging engagement and participation throughout the application. 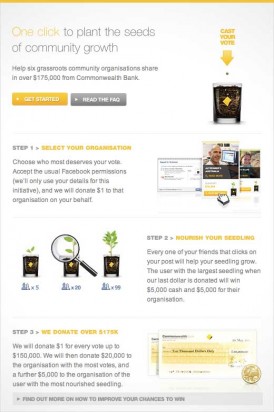 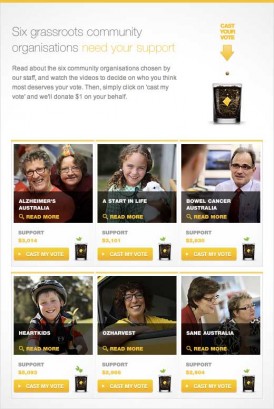 Unlike many social media efforts from financial institutions, the Commonwealth Bank Community Seeds campaign actually leverages the social capabilities of Facebook to generate real social engagement among participants and their social networks. There are two important aspects that allow the Community Seeds campaign to promote real social engagement: 1.) Infrastructure – the app is designed to make it easy for participants to share the campaign with their own social networks, and 2.) Incentive – voters and the participating organizations are offered extremely attractive incentives that encourage sharing the campaign with as many people as possible.

In terms of infrastructure, the Community Seeds application not only makes it easy for participants to vote for their favorite organization, but it is also designed to be easily sharable. When a participant votes, an update is automatically posted to his or her wall about the campaign; this helps spread the word to each participant’s Facebook friends. It’s a simple way to spread the word, but it’s a feature that many companies overlook when developing social media campaigns like this one. More impressive, however, is the fact that Commonwealth Bank measures and reports the influence of each voter by way of a Leaderboard, which features the most influential participants. Each voter is given a custom link that acts as a gateway for their own social networks to participate in the voting process. Voters are encouraged to get their friends to participate with an incentive package totaling $10,000 — $5,000 of which is awarded to the individual voter with the greatest influence , and another $5,000 is awarded to that participant’s organization of choice. It’s a great example of an organization leveraging others’ social networks to generate awareness and ultimately increase reach and participation. 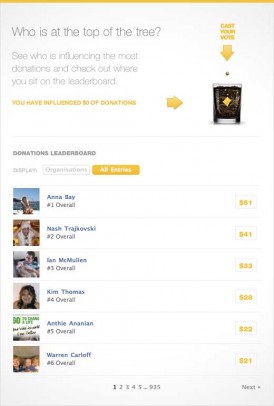 The Community Seeds campaign from Commonwealth Bank is an excellent example of a financial institution leveraging social media and the capabilities of Facebook to create an innovative and engaging marketing campaign. The robust multi-faceted campaign may be complex from an internal standpoint, but it manages to be user-friendly and easy to navigate from the user standpoint. Perhaps the most impressive features of this campaign, and the most important given the fact that it’s run through Commonwealth Bank’s Facebook page, is the real social engagement and sharability of Community Seeds.

The campaign leverages social media to encourage participation and it gives participants all the tools they need to easily spread the word about it. Community Seeds is extremely social, and its various layers and objectives should serve as an example for other financial institutions looking to leverage social media to create an engaging and innovative marketing campaign.