With gas prices flirting around $5 per gallon, there is no better time to start integrating free fuel offers into your promotions. Here’s some tips for planning a gas giveaway, along with some examples from retail financial institutions. Pay special attention to the details in each example, as the structure and conditions for each promotion varies widely. You might like ideas in one promo that you choose to integrate in another.

Pick the Incentive(s) That Achieves Your Goals
Do you want to use free gas as an incentive that fuels new accounts, loans, CDs or credit cards? Maybe you want to create a sweepstakes with gas prizes to collect direct marketing information. If you want to generate buzz, create name awareness and get free press, you can give away free gas to everyone who shows up at a designated place and time. And there’s no reason you can’t combine these gas offers.

Partner with a Gas Retailer
No matter what type of gas giveaway you choose, talk to some gas stations, tell them what you want to do and stress all the fantastic PR they’ll get, then hammer out a deal for a big discount on bulk fuel. If you want to give away free gas as account incentives, you’ll be wise to partner with a large chain of gas stations in your area to make it convenient for people to participate.

Plan Your PR
You can milk a gas giveaway for PR coverage. Gas prices are high and banks are a major topic these days, so many media outlets will be eager to write a story that blends both. If you’re going to do a guerilla gas giveaway, be sure to let the TV stations in your area know in advance so they can have camera crews ready when a line of cars wraps around the block.

Legalese
A gas giveaway can be a little more complex than your typical promotion. Be sure to consult with a lawyer to make sure your disclosures cover all the bases. If you have a promotion where people can get gas at reduced prices, will you cap the number of gallons one person can get? How many cars they can fill up?

Work with Law Enforcement
If you’re going to give away fuel at a gas station, then you should contact your local police department and let them know you expect your promotion will create traffic problems. They may provide — or require you to pay for — a traffic cop. If you want to maximize PR value from this type of event, you should go ahead and hire a policeman

Surprise Discounts – Digital FCU (2006)
Back when gas when $2.49 a gallon, DCU rolled gas prices back to 99¢ in a promotion that was pointed exclusively at their members. They kept it low-key by only emailing 2,000 members who lived within two miles of the selected gas station. During the event, DCU had signage and around a dozen employees at the gas station. The staffers wore green t-shirts bearing the DCU name and logo, washing windshields, handing out t-shirts and talking up the credit union while people waiting in line for their free fuel.

“When people wait one to two hours in line for gas, we can tell the DCU story,” says John LaHair, DCU’s PR manager. “It’s a captive audience.”

They even had off-duty, uniformed policemen directing traffic to keep traffic moving and drivers from cutting in line. To address the long line for gas, one of the cops yelled, “Free checking, no waiting.”

In the six-hour time frame, roughly 10,000 gallons of gas were sold to 875 people, more than double what the station does on a daily basis. Gas cards were handed out to some people who couldn’t get to the pumps before the promotion ended.

When DCU repeated their price rollback promotion in 2008, they offered gas at $1.99 per gallon for six hours at a single gas station. They didn’t make any announcement in advance.

Free Gas Here! – Xceed Financial Credit Union (2009)
To promote the grand opening of a new location, the credit union gave away $50 in free gas per vehicle at a gas station across the street from the branch. The guerilla giveaway only ran for two hours, from 7 a.m to 9 a.m., marketed by little more than an Xceed employee holding a sign on the side of the road.

“Our associates spoke with everyone in their vehicles as they lined up for free gas,” said Kathyrn Davis, SVP/Marketing at Xceed. “Working with local law enforcement, we actually pumped gas until 9:30 a.m. to ensure that all those who were in line before 9:00 received gas.”

After the free gas promo, the credit union received more than 50 phone calls from non-members who either received free gas or heard about the promotion via media coverage. 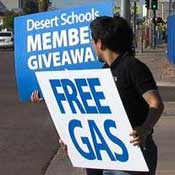 Member Gas Giveaway – Desert Schools FCU (2011)
The credit union gave away 10 gallons of fuel to the first 50 members who showed up at one of three gas stations on a Friday afternoon. All members needed to do was show their proof of Desert Schools membership and a valid drivers license.

Pay Your Way – Patelco Credit Union (2011)
Rather than having an event at a specific location, Patelco used its “Pay Your Way” street team to surprise people at pumps around their area. In true guerilla fashion, they would show up at a gas station unannounced and start paying for people’s fuel purchases.

$50 Gas Card Free – Heritage Bank (2008)
Those opening a personal checking account would receive a $50 gas card. People could also stop by a branch to register for a free $150 gas card. Referring a friend would also get you a $50 gas card, plus another $50 in gas for the friend.

Free Gas Sweepstakes – Georgia’s Own Credit Union (2011)
Participants who financed their car, boat, motorcycle or RV through the credit union could win $2,000 towards gas. Additionally, the first 100 members to close a vehicle loan would get a $25 gas card. The promo applied to refinancing also. Fort Worth Community Credit Union had a similar offer for $100 in free gas for refinancing an auto loan from another lender.

$50 Free Gas – US Bank (2008)
They offered $50 in free gas at Mobil and Exxon stations when opening a checking account with check card. Participants could get another $50 in gas if they signed up for Speedpass, a contactless payment system. US Bank held a similar promotion in 2008 for $75 in free gas when opening a checking account and using the checking account check card to buy gas. Two interesting caveats: check card gas purchases needed to be non-PIN based, and customers needed to bring their gas receipts into the branch where the account was opened.

$500 in Free Gas Cards – Flagstar Bank (2008)
The bank offered up to $500 in gas for opening a new checking account with direct deposit. Participants could only get $25 each month, so it would take one year and seven months to redeem the full $500. The offer was limited to new customers only. The minimum opening deposit was $50, and direct deposit must be established within first 60 days of account opening.

Free Gas For A Year

Noco Express Check Card Sweepstakes – M&T Bank (2011)
In this co-promotion, M&T partnered with NOCO gas stations. Anyone using their M&T check card at a NOCO Express ATM would be automatically entered for a chance to win $3,000 in gas. M&T did the promotion back in 2010 and are repeating it this year, with the same structure, prizes and run dates. What does that tell you?

Everyone from senior management on down played a role. There was a big kickoff event where goals were introduced, staff incentives revealed and everyone got a t-shirt. 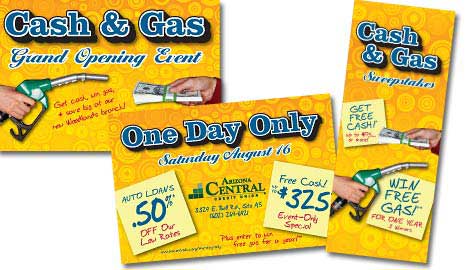